The Britten Sinfonia has a lot to celebrate. The Cambridge-based ensemble is twenty years young and embarking on a residency at the Barbican Centre, which – as we were led to believe in the speeches before the concert – is already being planned up to at least 2017. And it obviously knows how to celebrate. The ensemble had commissioned works to help the party along.

The first, in which players from the Britten Sinfonia teamed up with members of the Britten Sinfonia Academy, was given in the foyer pre-concert. With a theme immediately recognisable from Stravinsky’s Pulcinella, which Stravinsky assumed was by Pergolesi, but which we now know was Domenico Gallo, was by Alissa Firsova and, appropriately, called Gallo Variations [London premiere]. By turns witty (if not as light as the Stravinsky) and particularly satisfying in its slower sections, deeply resonant, this kicked the evening off to a good start.

Britten Sinfonia Voices opened the main concert with Purcell’s Hear My Prayer, conducted by Eamonn Dougan, neatly segueing into the premiere from composer (and, in this performance, celesta-player) Nico Muhly, who had chosen texts from the same Psalm 102 for his celebratory piece that encapsulates the ensembles’ exploratory spirit in its title, Looking Forward. He has fashioned an ear-arresting piece that flowed seamlessly from the Purcell. 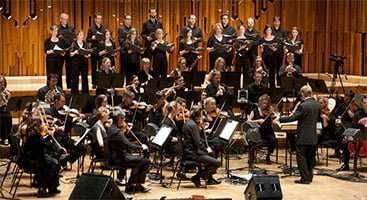 Two regular violin partners – Pekka Kuusisto and Alina Ibragimova – played a vigorous account of J. S. Bach’s Double Concerto, before Kuusisto took the leader’s chair with full score at his feet, leaving Mark Padmore for an incisive account of Les Illuminations. That and Prokofiev’s ‘Classical’ Symphony that closed the first half (with Jacqueline Shave now directing) displayed the players’ commitment – bright attack and fearless unanimity – reaching parts of the music that other ensembles gloss over: tactile, tangible music-making.

James MacMillan’s constantly shifting monody, One, has a distinctly Scottish lilt, while Kuusisto, on an electric violin, with various electronic wizardry at his feet, so he could record, playback, re-voice and accompany himself, offered a tribute to Britten Sinfonia. Dressed in trademark bespoke flowing black jacket with customised elbow patches, he hoped that his improvised piece (listed in the programme as OMG HBD – which I took to mean Oh My God – Happy Birth Day) would work. There was no indication afterwards that it didn’t, and the audience certainly had no doubts. I’d never thought that a violinist’s armoury needed as fancy footwork as an organist!

Joanna MacGregor was the final soloist, bringing an anachronistic sound to J. S. Bach in using a concert grand – shockingly full I thought, especially as the programme missed out the whole of the 19th-century completely. Joined by four guest soloists – Kuljit Bhamra (tabla), Tom Herbert (bass guitar), Seb Rochford (drums) and, most visibly, saxophonist Andy Sheppard – we were on more enjoyable ground with McGregor’s transcriptions of twelve Moondog pieces, collectively presented as Sidewalk Dances. An invigorating mix of rhythm and styles, it had McGregor wandering between keyboard and conductor’s podium for a suitably celebratory flourish to an eclectic and enjoyable celebration. It certainly whetted the appetite for whatever Britten Sinfonia comes up with looking forward…