Yet another Britten programme but an intriguing one, including two undervalued works from opposite ends of his career. 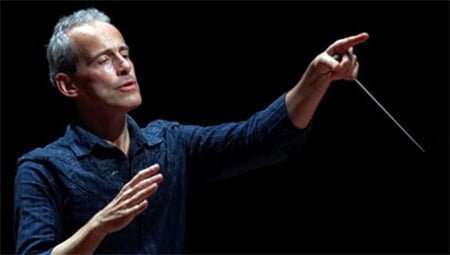 Our Hunting Fathers (1936) continues to divide opinion. British orchestral players originally had problems with the music’s technical demands and prankish tone while audiences were nonplussed. Nowadays it is W. H. Auden’s convoluted moral allegories which can seem problematic, although there remains a genuine flash of terror when the medieval catalogue of hawks’ names discovered in a text by Elizabethan poet Thomas Ravenscroft comes down in the end to just two: “German” and “Jew”. With fascism on the march in Europe, Britten in his early twenties was writing music of ostentatious brilliance influenced by the vocabulary of European modernism. He had recently seen Shostakovich’s Lady Macbeth of Mtsensk and that shows too. The cycle has remained something of a rarity (except at the Proms in Heather Harper’s time). However Ian Bostridge himself recorded it with the Britten Sinfonia under Daniel Harding in 1997. His voice is no longer fresh – the top notes can emerge without vibrato as a keening yelp, the lowest more sprechstimme than sprechgesang – but then Britten’s vocal line is implausibly wide-ranging and the tenor’s theatrical commitment is never in doubt. Some sluggish tempos had been moderated, ‘Messalina’ no longer quite such a dirge. It is quite an act, albeit not for all tastes.

Less explicable is the neglect of the Suite on English Folk Tunes (1974). This lean five-movement work, its subtitle taken from a line in Thomas Hardy’s Before Life and After (which had already served as the finale of Britten’s song-cycle Winter Words), attracted the attention of Leonard Bernstein in its early days yet has failed to secure a firm place in the repertoire. Even though light music of its type has made something of a comeback in recent years, it is not jolly enough for Classic FM and is not even mentioned in John Bridcut’s new BBC film devoted to Britten’s Endgame. In the wake of his unsuccessful heart operation, the composer turns defiantly traditional, dishing up nostalgia with a sour edge and traces of Frank Bridge. The third movement ‘Hankin Booby’ was commissioned for the opening of the Queen Elizabeth Hall in 1967, the rest newly composed. Some kind of resolution is achieved in the final ‘Lord Melbourne’ movement based on a melody uncovered by Percy Grainger to whose memory the project was dedicated. Its wonderful sad radiance made a considerable impression here, its final faltering fade bringing intimations of death (and, perhaps, another nod to Shostakovich).

The first half contained the interlopers, only partly so in the case of the eloquent Purcell realisation. Best of all was a notably assured account of the Tippett, which this ensemble played at Cadogan Hall in August under Sian Edwards. It was good to hear the audience responding so warmly to one of Tippett’s most glorious scores even if some of his swirling fugal writing can’t be persuaded to ‘speak’. The solo group consisting of two violinists and a cellist were placed centre-stage. 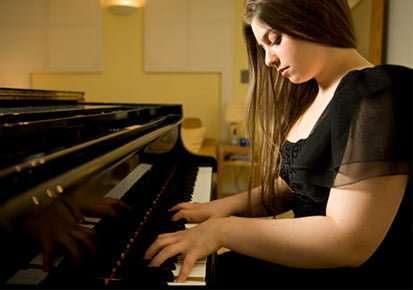 In between came Young Apollo (1939). It is not clear why Britten withdrew this piece ostensibly inspired by Keats’s “new dazzling sun-god, quivering with radiant vitality”. It being something in the nature of a portrait of the teenage Wulff Scherchen (and hence associated with what was probably Britten’s only other physically consummated relationship), he may well have suppressed it in deference to Peter Pears. Since its posthumous disinterment in the late 1970s it has secured more exposure than many established parts of the oeuvre although some listeners have never found much of value in its super-bright repetitions of A major. Lara Melda, 2010’s BBC Young Musician of the Year, careered up and down the keyboard with remarkable aplomb in a spangly midnight-blue frock, the safety net of sheet music bravely eschewed.

All the performances were first rate. The Britten Sinfonia does not believe in the guiding hand of a principal conductor but perhaps we will see more of Paul Daniel now that he has relinquished his Australian orchestra in favour of posts in France and Spain. This relatively small, famously expert body (23 strings) delivered impressive depth of sonority under his affable direction – he dispensed with a baton in the Purcell and Tippett items. The audience, not the largest but enthusiastic and attentive, was assailed by a few inexplicable noises off. The Barbican Centre’s managing director was among the luminaries present, so Sir Nick if you’re reading this please try and do something about those subterranean toilets. Oh and one of the lifts has been iffy for weeks.