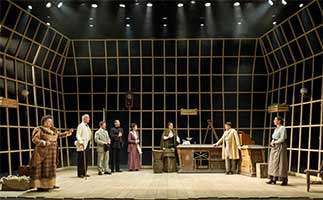 Benjamin Britten’s Albert Herring, the fourth of his fourteen operas/operatic-type works, came in 1947, a resurgence of pastoral Englishness not so far removed from people’s memory as it has now inevitably become, and a welcome reassurance to the country’s immediate post-war society that, what with one thing and another, in rural communities life tended to go on pretty much as it did before, sprinkled with humour and humanity.

Britten no doubt felt the need of the challenge of a lighter operatic work (in terms of subject-matter) following the dark drama of Peter Grimes and (largely misunderstood at the time – not much better now) The Rape of Lucretia. Knowing the locale into which Guy de Maupassant’s story had been brilliantly transplanted by his librettist Eric Crozier, Britten responded with the certainty and downright genius of absolutely right musical invention. That may be all very well, but – as we (and composers, albeit mainly posthumously) have learned to our (and their) cost – some ‘operatic producers’ have taken the existence of a fully-conceived and created work of art as a basis for their ‘own interpretation’, largely – it appears – concerned with the personification of their own fantasies and/or inhibitions alongside other psychological absurdities, so that the original conception by the creators either is abandoned or largely sidelined for Freudian realisations.

Of course, such matters may very well exist in the original work, in which case we assume the essential humanity and therefore universal relevance of the piece will (or ought to) come through, but whereas both ‘Grimes’ and ‘Lucretia’ are redolent with psychological opportunities for the latter-day producer, and we have seen some pretty absurd nonsense in recent Britten productions, it is with considerable delight that one welcomes this excellent production of Albert Herring, a heart-warming opera by a great composer, and a work which suits the Linbury Studio Theatre almost literally down to the ground. 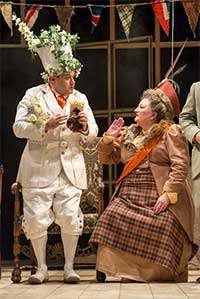 Britten specialists might very well object to the following comment, which is that I regard Albert Herring as Britten’s most quintessentially English operatic work, musically in many ways a genealogical descendant of the very best of Arthur Sullivan, a work which responds best to that kind of genuinely humorous approach, without searching too much for deeper psychological meaning (although Britten’s organic compositional mastery is head and shoulders above that of the south Londoner). Some such approach seems to have permeated this English Touring Opera production, directed with considerable understanding and flair by Christopher Rolls. 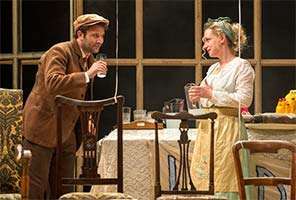 One basic set serves well enough for the three acts, although the practical absence of walls meant the “bounce me high, bounce me quick” children’s game near the beginning of Act Two, which Britten notates clearly in the score, cannot be fully realised – but it was good enough. However, the constant supply of stagey fog/mist/thinned-out semi-dry ice was a distraction in the first Act – no need for it at all – and at the beginning of Act Three it was so pervasive that at times it was difficult to make out the action – and all this happening just before, and on, the First of May! Thankfully, after that, it was turned off.

The costumes are largely suitable – yet, as a female member of the audience of a certain age pointed out to me during the interval, “Ladies did not wear trouser suits in 1900” – referring to Florence’s costume, and Sid – who appeared in army uniform in Act Three – wore his BD belt webbing upside-down (the hooks at the back should be on the top of the belt, not on the bottom).

Those tiny niggles constitute the full extent of my criticism: the rest is unalloyed praise for the singing, acting, characterisation and orchestral playing under Michael Rosewell. Indeed, the musical aspects of this production are beyond criticism: the assumption of every one of the roles is individually quite outstanding, with flawless enunciation from every member of the cast. It is a considerable achievement to have garnered thirteen singers of such quality to match the thirteen instrumentalists in the chamber orchestra. One hesitates to single out anyone from such musical consistency, but Mark Wilde, as Albert, was stunning – genuinely funny and touching by turns, especially in his long scena, and if some of his funny business was reminiscent of a combination of Rowan Atkinson as Mr Bean and Ronnie Corbett in the ‘four candles’ sketch, this may well have been deliberate, but whether it was or not the result was ideal for the character and the singer’s portrayal.

Time and again one laughed out loud at the sheer excellence of this production, from all of the principals, the singers relishing their opportunities with alacrity: touching and very funny, lyrical and dramatic – one could search the thesaurus for hours to describe the achievement of virtually every member of this company, a veritable litany of unblemished enthusiastic thanks. The chamber orchestra was equally magnificent: we could appreciate anew what Britten was able to conjure from the three notes of a C major triad: “May Queen, May Queen!” especially, and its subtle implications in the score later on. This production of a timeless masterpiece ought not to be missed: brilliant, brilliant, brilliant! The programme book is also well worth having for Robert Saxton’s excellent short essay on the opera. They don’t come better than this.