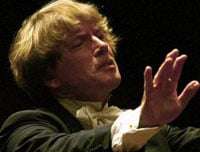 This concert was the climax of this year’s Bruckner Tage, a week-long festival at the monastery at St Florian, where, as a small boy, Bruckner had been taken by his mother the day after his father died, and where he was a choirboy and organist and received most of his early musical education. The festival focused on the Fifth Symphony, and the previous evening a ten-piece jazz band, Temporary Art Orchestra, had performed it in ‘einer Fassung für Jazzensemble’. This was a marathon of jazz that had to be heard to be believed – the wonder not that it was done well, but that it was done at all.

The 90-minute Marthé performance of the Fifth, by virtue of the sheer intensity of expression and weight of its utterance, ground deeper and deeper as it progressed and, indeed, come the final blazing chorale it was as though the glory was from beneath, from the subconscious, or sub-universe, rather than being light streaming from heaven above. It was an experience from which I emerged thoroughly drained.

The performance had begun with an organ improvisation that lasted maybe half an hour, in which the 69-year-old Hermann Nitsch – an artist notorious as Vienna Aktionist from the 60s onwards – gave his homage to Bruckner. Assisted by a colleague who occasionally whispered in his ear how much time had elapsed (so as to ensure that we stopped short of eternity) and who, at two great dissonant climaxes, handed him planks of wood that enabled him to press a whole keyboard’s-worth of notes at once, Nitsch began with a long, very low rumble and slowly constructed two overwhelming crescendos of notes and chords held for minutes at a time, the undertones burbling beneath like a suppressed volcano. It was a work of many decibels, massive effect and shattering impact. When it became apparent that it had finished it was met by raucous boos and whistles from a claque of anti-Nitschists who regularly appear at his events. What chance for Bruckner after this?

Nevertheless, with no interval beyond tuning-up time, Marthé launched a monumental Fifth on its way, conducting with simple, calm, mesmeric gestures and bringing forth from the young people of the European Philharmonic Orchestra playing of consummate beauty and intensity such as you are unlikely to hear from the great professional orchestras. Every moment was intense; there was no respite, not even in the Gesangsperioden. The entry of the Gesangsperiode in the first movement was magical, the slow tempo momentarily disturbing but then revealed as right. The great fortissimos of the third theme were layered well so that their melodic underpinning was made apparent and brash vulgarity thereby avoided. (At this point, TV crews who had been crowding round Hermann Nitsch, no doubt eager for scandal but now bored with Bruckner, made a noisy and disruptive exit, and consequently much of the ‘development’ was lost.)

The Adagio began perfectly, the 3 against 4 thoroughly secure – a strangely rare achievement in performances of this movement. The noble second theme, not overstated or bloated but very intense, proceeded gloriously towards its first ecstatic climax – and, goodness me, there was a cymbal clash, and a triangle tremolo. It was as though we were suddenly swept into the Adagio of the Seventh! Musically it was not a disruptive gesture, but it was unsettling, for if Marthé inserted cymbals and triangle here, where else might they next occur? It was hard to take one’s eyes off the perpetrators for fear that they might stand up again at any moment and repeat the intrusion. But it seemed to signify a highpoint in the symphonic argument and, thereafter, with all those falling sevenths, and the earthbound dance of the scherzo, it was down, down, down. This dance displayed one of the Marthé’s great strengths as a Bruckner conductor – although slow, and heavy, he really managed to make it dance. This was tremendous music-making.

But it was round about here, although the tempo was slow, I felt I was being left behind, and the performance appeared to enter territory into which I had difficulty following. Perhaps it was merely a case of post-Nitschean exhaustion combined with the unrelieved intensity of the performance, but the finale seemed in the end a numbing experience. There were some outstanding moments – Marthé’s treatment of the clarinet’s interjections after the introduction, during the recall of the first- and second-movement themes, was distinctive. In conversation the following day he explained that whereas in the first movement the slow opening delivers a vision of heaven’s gates opening, in the finale the clarinet bursts in after the slow opening “like a naughty, cheeky schoolboy”, and ultimately the three clarinets insist on the thoroughly earthy first fugue theme. Hence the symphony achieves in this finale, by virtue of the double fugue, a synthesis of vulgar earthiness with the glory of heaven. (My German is poor, but that’s what I understood him to say.)

If this were so in performance, what a blessed gift Bruckner via Marthé would have presented us. Indeed, many there said this was the best or one of the best Fifths they’d ever heard, so no doubt this was their experience. But even though there were a couple more cymbal clashes – not multiple like in the Schalk version of the Fifth, but enough to bring him to mind – the final moments seemed to lack the visionary quality the interpretation demanded.

I fear I had become a casualty of the battlefield and left for dead. Mind you, the decision of Nitsch to leave his position in the organ loft just before the coda – bringing to mind New Yorkers who reportedly leave “Der Rosenkavalier” just before the final trio so as to be sure of their transport home – was almost as unsettling as the TV crew’s departure in the first movement. If it was all too much for the great Nitsch, then what chance was there for mere mortals? (The reason for his premature departure only became apparent later when he joined Marthé on the podium to take the applause.)

I await the CD with some impatience so as to re-evaluate the interpretation. Make no mistake, this was a powerful and extraordinary performance that demands to be heard – though maybe it should be issued with a health warning for those of a sensitive disposition: “this recording contains cymbal clashes and triangles in unexpected places.”

For reasons apparently to do with funding, this is the last performance by the European Philharmonic Orchestra. Its recordings and performances with Peter Jan Marthé, while always controversial, have never been less than magnificently played.