The conductor’s sense of drama carried into Édouard Lalo’s Symphonie espagnole (1874), the few bars of orchestral introduction beginning as applause was dying away, with little time for Renaud Capuçon to get his bearings. If his first entrance was a bit rickety note-wise, he went on to give a sensational account of the hugely virtuosic part originally composed for the Spanish master, Pablo de Sarasate. Frenchman Lalo (like many of his countrymen he had a real feel for things Spanish) pronounced this work a symphony (underlining the point by also writing a Violin Concerto), but the focus is on the string instrument, especially with Capuçon bringing so much bravura and charm to the roulade of notes.

Symphonie espagnole, quite a rarity these days, has five movements (for many years, in its heyday, performances and recordings, including those by Heifetz and Milstein, tended to omit the fourth-movement Andante, the work’s sultriest and most-eloquent section). Capuçon was complete, and for all his amazing ability he wasn’t showy, playing from inside the piece with affection and style, with gleaming top notes and rich low ones; and with a technical address both breathtaking and music-serving. He created fireworks and affecting lyricism and enjoyed full-on support from Fischer and the BFO, very much top billing with Capuçon – creating a symphony (sounding-together) of recreation – although one wonders why Fischer had a tambourine instead of a side drum. 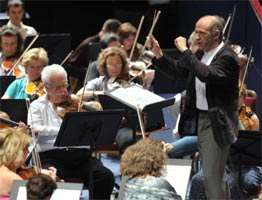 Rimsky-Korsakov’s Scheherazade was similarly without pretence. Refinement and good balance were high on the performers’ agenda (aided by antiphonal violins and double basses projecting in a row from the back of the platform) but with no shortfall in narration. From one violinist to another, BFO concertmaster Violetta Eckhardt was a beguiling story-teller; numerous other soloists equally so. Fischer reminded us that Rimsky was a great orchestrator, and could also paint fables. If a few interpretative mannerisms crept in occasionally, one was attracted by the Slavic vibrato from the trombonist, the sweet strings displaying the true love of ‘The Young Prince and Princess’, and the well-timed impulsiveness and lingering that rekindled interest in music sometimes thought repetitive.

In fact, this was an irresistible account if not without some wackiness – such as Fischer separating the side drum from the rest of the percussion and then having it played so reticently, ditto the gong stroke when the ship crashes into the rocks. Nevertheless, there was much that was special, not least the very end which magically disappeared into the ether, suggesting something unfinished, more tales to be told. We weren’t quite done. The encore was by Ernö von Dohnányi, something exhilarating with suggestions of a circus, maybe one of his Symphonic Minutes – it was certainly “very short”!