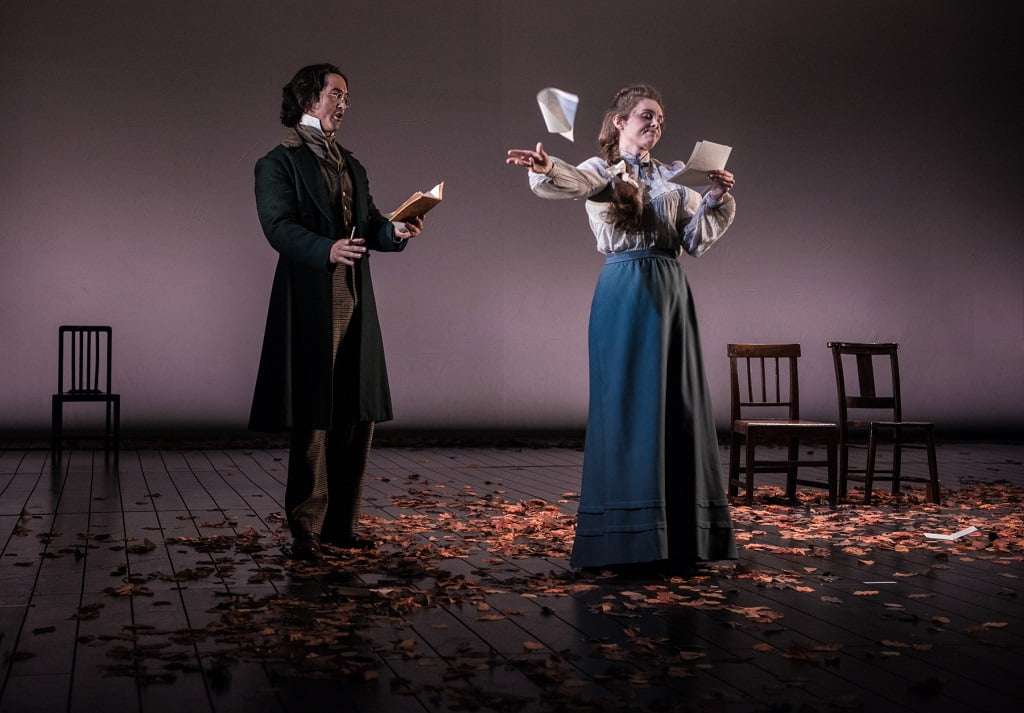 Buxton is marking its fortieth festival with five new productions in the town’s jewel of an opera house, starting off with Tchaikovsky’s Eugene Onegin.

There is so much going on in Pushkin’s story – four young (barely in their twenties), well-to-do Russians and the consequences of missed opportunities and bad decisions – and so much perception in Tchaikovsky’s music that directors add interpretation at their peril.

Although set in-period, Jaime Manton’s approach hedges its bets between abstract, surreal and symbolic, and he and designer Justin Nardella cast their poetic and atmospheric net wide, with a nagging sense of déjà-vu.

Chandeliers loom large in Nardella’s set, evocatively lowered and shrouded for the Prelude, then glowing fitfully to register Tatyana’s emotional turmoil in her ‘Letter Scene’, suggesting light-bulb ‘thinks’ moments. There is much play with reflective surfaces, as though holding a critical mirror up to the audience. Autumn leaves, snow and love-letters float down to the stage, cleared away by peasant women’s Soviet-style synchronised sweeping, and mismatched kitchen chairs are central to the design, a faint echo of the predilection, some years back, for heaps of luggage in productions.

There are puzzling oddities, such as Tatyana alone in her bedroom with stationery and a group of male serfs – explained as an undertow of sexual potency – and, most baffling of all, an obviously crucial point being made with a jam-jar, mimed fruit-picking and the fatal letter. There are heavy hints of social unrest, along with a must-have unscripted role, here Tatyana’s alter-ego as a young girl (taken by a dancer). Then just as you’re thinking ‘enough already’ with all these fiddly significances, Manton delivers the duel scene and Onegin’s final showdown with Tatyana, now Princess Gremina, in all their devastating and tragic pointlessness. 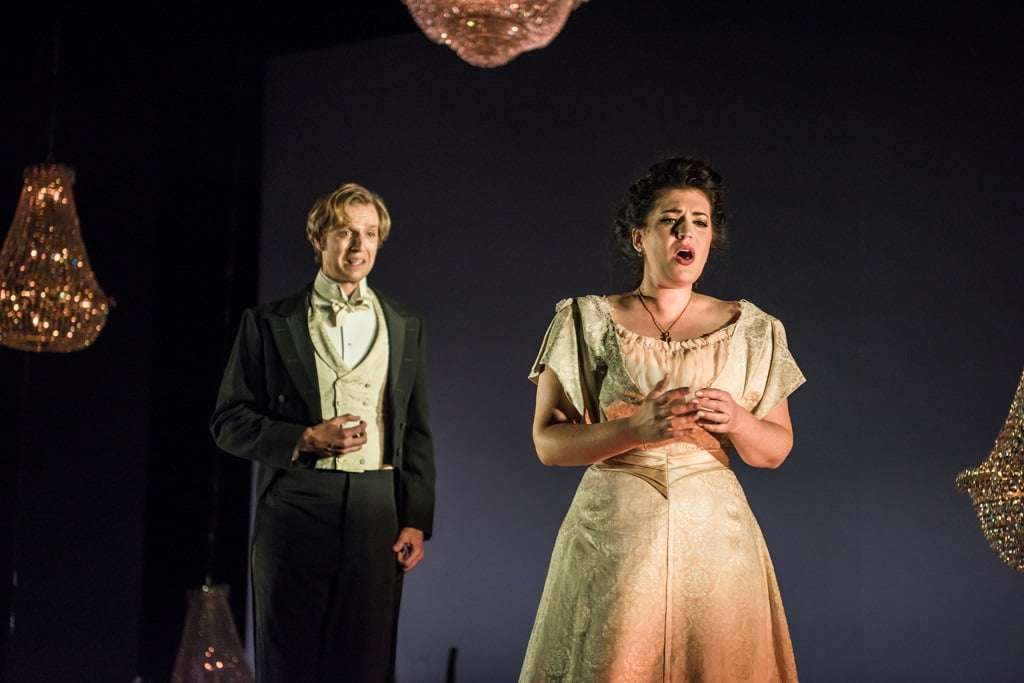 It is on the strength of those two scenes and on the overall strengths of the four leads that this staging powerfully comes into its own. The two friends, Onegin and Lensky, are especially good. George Humphreys, tall and aristocratically good-looking, is a natural for persuading us of Onegin’s supercilious, patronising entitlement, and, while his baritone thins at the top, it still exudes seduction, authority and exasperation. Most importantly, in the St Petersburg scenes, Humphreys gives a distressingly accurate realisation of what Onegin has lost. David Webb is in the same powerful league as Lensky, the passionate, impetuous poet who could easily change the course of events that leads to Onegin killing him. In a perfect world, Webb’s tenor would be one size bigger, but he has it all for the lyricism and inwardness of Lensky’s pre-duel soliloquy, when you know that he knows he is going to die.

Conversely, Shelley Jackson’s soprano is a bit too large and voluptuous for shy, bookish Tatyana, and she makes her distractingly staged Letter Scene more of a stand-alone moment than the action that drives the story, but then it is clever how she tones things down for a completely credible portrait of the married Tatyana now forced to reject Onegin. As with all good Olgas, Angharad Lyddon leaves you wishing that the role has more to do – Lyddon has the measure of Olga’s initially benign mischief. Gaynor Keeble’s Madame Larina and Ceri Williams’s Filipyevena set up the Chekhovian rural languor beautifully, and Williams provides an excellent, long-suffering foil to Tatyana’s headstrong passions.

The Northern Chamber Orchestra is founded on two double basses but any lack of heft can be set against some lovely and nuanced playing – contributions from horn and cello are very fine – and Adrian Kelly (Buxton’s new Artistic Director) steers his way through the complexities of the staging with elegant and effortless pace as well as focus.