Gilbert & Sullivan
The Mikado, or The Town of Titipu – a comic opera with lyrics by William S. Gilbert and music by Arthur Sullivan

The company is the resident team of the annual Buxton International Gilbert & Sullivan Festival. Now in its 15th-year, this three-week mix of professional and amateur productions is the Mecca for G & S devotees, and can sometimes whiff of an Anorak’s convention; but it also appears to draw in a healthily large number of ‘normal’ punters from far and wide. However, nothing says ‘amateur’ or ‘parochial’ more than a bluff compère mumbling parish announcements peppered with in-jokes in front of the curtain for several minutes before the show begins. The Festival seriously needs to re-think its presentation if it is to live up to the “International” class of the performance itself. 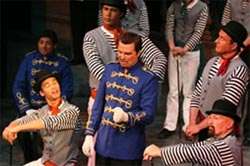 Gilbert & Sullivan at their most sparkly and most musically impressive, this “Mikado” was on an altogether higher plane than the Carl Rosa Company’s recent foray into London’s West End. The chorus was superb. The “Gentlemen of Japan” instantly grabbed attention in their scene-setting number, with snazzy fan-work and rich voices, while the women made real music of their potentially twee entrance, ‘Comes a train of little ladies’. As with Carl Rosa, the chorus was made up of predominantly young artists; but in contrast, the confident and engaging Buxton singers produced a full, operatic sound. Simple choreography helped create a joyful sense of vibrant animation.

The principals were all consummate performers with good singing voices and a well-honed instinct for the essence of G & S. The indisputable star was Simon Butteriss, a hyperactive Ko-Ko who could do no wrong, imbuing the role with an exhilarating, infectious energy. His clownish antics reached an apogee in the hectic trio ‘Here’s a how-de-do’ (though its unnecessary three encores, each identical apart from the punchline, harked back to the excesses of the ‘old’ D’Oyly Carte). His “little list” of candidates for the chop was more hit-and-miss than Richard Suart’s razor-sharp updates for English National Opera; but among its successes was a barbed topical dig at people who only go to see Shakespeare when it stars Doctor Who! I was less amused by the distinctly un-Gilbertian strong language of some of Butteriss’s ad libs (though the predominantly pensionable-aged audience seemed completely unfazed).

Sharing the limelight were peerless G & S veterans Jill Pert (a truly formidable Katisha, also capable of real emotion in her tear-jerking arias) and Bruce Graham, whose colossal Pooh-Bah was a masterpiece of comic timing. David Curry had both a likeable personality and terrific voice as Nanki-Poo, though it was a shame he swallowed too many of his funny lines. Charlotte Page’s doe-eyed Yum-Yum was capriciously arch – even if her school-girl casting required a little stretching of the imagination. Only Donald Maxwell in the cameo title role disappointed, failing to raise his performance above a bland traversal of the libretto.

Musical standards were consistently high, and the performance well-paced: a credit to Richard Balcombe. Set and costumes were basic but colourful and highly effective.

Affectionate though not slavishly ‘traditional’, the bottom line is that this production was hugely entertaining. The Savoy Operas currently are in no better hands than those of the Gilbert & Sullivan Opera Company. I strongly urge you to head to Buxton to catch “Iolanthe” and “The Gondoliers”.