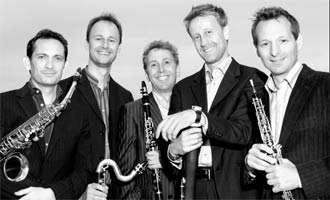 It made a refreshing change for Wigmore Hall to programme wind music for the BBC Radio 3 Lunchtime Concert, and still more so because the musical content ranged from the 13th-century to the present day. To be more specific, Calefax is a ‘reed quintet’, which means no flautist and a sound that can be raucous or surprisingly gentle. The players achieved a wide range of sonorities and timbres through exceptional technical skill and some interesting and imaginative arrangements, all linked together with a Spanish theme. They performed standing, which added to the informal atmosphere.

A suite from Llibre Vermell began the concert, a group of songs and dances in honour of Mary, the earliest music here and arranged by oboist Oliver Boekhoorn. His judicious scoring led to improvisatory contemplations from clarinet and bassoon in ‘Laudeamus virginem mater est’, the clarinet in particular making a beautiful sound in its higher register. The dances played around with syncopation and metre, making them occasionally difficult to follow rhythmically, but they were never short of charm or character.

We then heard an update of Trattado de glosas by Diego Ortiz (1510-c.1570), realised for reed quintet by José-Maria Sánchez-Verdú (born 1968), a suite in five parts, with four ‘Recercadas’ followed by a lively ‘Batalla’, courtesy of 18th-century composer Joseph Ximénez. The first and third of the ‘Recercadas’ found the group achieving an extraordinary sound, the older musical language suddenly modernised in a group of short, clustered notes with breathy overtones.

In the course of his hugely prolific career, Boccherini was one of the first composers to bring prominence to the guitar. The fandango performed here originated as part of a string quintet, but had already been arranged for guitar. Updating it to reeds, Ivar Berix showed an uncommon knowledge of the instruments he was writing for, with a particularly striking passage finding the bass clarinet at its lowest extreme and his own clarinet on a top ‘G’, with bassoonist Alban Wesly also showing impressive athleticism before he dropped out to play castanets, the dance music fully gathering momentum towards the end.

The music of Ravel transcribes well for wind quintet, with several existing arrangements of Le tombeau de Couperin. Saxophonist Raaf Hekkema was responsible for this arrangement, which replaces the finale ‘Feria’ with the entire Alborada del gracioso. All five instruments showed remarkable control in the soft legato offered by ‘Prélude à la nuit’, while ‘Habanera’ dragged its gait persuasively. Alborada del gracioso was persuasive if occasionally tricky to articulate, the band exhilarating when in full cry.

Letting their hair down for two encores, the quintet played Jordi Paulí’s Blanca Espurna, arranged by Boekhorn to include a tible (a Catalonian shawm) and the humorous Cant de coratge of Saló, which added to the tible a tiny piccolo saxophone, played to comedic effect by Hekkema.