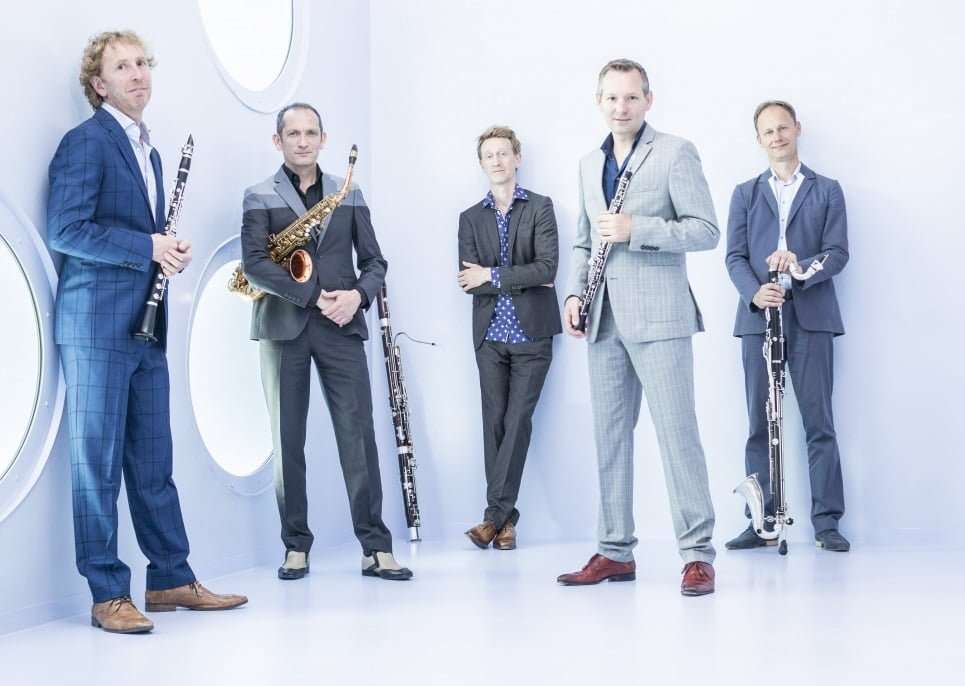 The Dutch reed quintet Calefax returned to Wigmore Hall in the company Cora Burggraaf, with whom they have made a recordings of arrangements entitled The Roaring Twenties. Once again they presented an enterprising programme for this BBC Radio 3 Lunchtime Concert.

The focus was principally on two cities: New York and Berlin. The former was the focus for Copland’s bluesy Sentimental Melody, a brief aside subtly arranged by Jelte Althuis. This acted as an up-beat to that composer’s good friend Benjamin Britten, whose Cabaret Songs unite the two cities, being based on texts that W. H. Auden drew from his experiences in Berlin. Although these four songs were written separately, and fall long after the Twenties had passed, they capture that decade’s spirit in Auden’s cinematic poetry and Britten’s similarly pictorial response.

To begin with Burggraaf was too quiet in the balance, but through the yearning ‘Tell me the Truth about Love’ she found her range above Althuis’s attractively scored accompaniment, the soft reeds chugging away respectfully. ‘Funeral Blues’, with its famous line, “Stop all the clocks, cut off the telephone”, could have been a touch more dramatic in its delivery, but ‘Johnny’ was brilliantly done, Burggraaf the wounded subject of Johnny’s changeable moods. Better still was the headlong rush of ‘Calypso’, which captures a mad taxi dash to Grand Central Station in New York. Here, thanks to the virtuosity of the players, the driver did well not to crash into a wall!

There followed a very fine arrangement of An American in Paris from Raaf Hekkema. Calefax, as well as evoking an authentic Parisian sound, seemed to double their personnel at times in a version that revealed the detail of George Gershwin’s melodies at an extremely lively pulse. Each member had the jazzy inflections and syncopations instinctively within their grasp, and the smiling account danced and swayed persuasively.

Hekkema was also arranger for the three Kurt Weill songs with which the concert closed, and which also found Burggraaf in her element. ‘Youkali’ featured some brilliant if solemn-tread writing to preface the text “Almost to the end of the world”. The sourness of ‘Die Ballade vom ertrunkenen Mädchen’, from Berliner Requiem, was all too apparent in the mezzo’s tone, while her backing group divided into two, with oboe, saxophone and bassoon giving surprisingly bleak counterpoint to clarinet and bass clarinet. Finally ‘Surabaya Johnny’ was achingly needy, given with a pronounced holding back that only exacerbated the sense of loss, though the tenderness at its heart gave some light amidst the darkness.

There were two encores, both 1920s’ popular songs, beginning with a simply delightful account of ‘Breezin’ Along with the Breeze’, written by Haven Gillespie, Richard Whiting and Seymour Simons. Burggraaf danced at the back of the stage during the saxophone solo. Meanwhile the chanson ‘La petite tonkinoise’ (by Vincent Scotto and d’Henri Christiné) evoked similar charm.