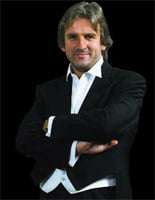 Barry Douglas founded Camarata Ireland in 1999 – an orchestra of Irish and Ireland-associated musicians (from both sides of the border) to match the best in the world. It’s an outstanding group.

Rakastava immediately testified to Douglas’s musical integrity. This three-movement suite – a 1911 re-casting for strings, triangle and timpani of choral music originating from 1893 – is often performed blandly and anonymously. Not so here. The first few bars immediately established three points: Sibelius’s distinctive style of composition; Rakastava deserves attentive listening in its own right; and the playing of Camerata Ireland shone with lyrical silver, the music speaking eloquently.

Schubert’s Third Symphony is an exuberant, unclouded work of an 18-year-old. It has spring and energy – as did this performance, enthusiastically. The first movement leapt with classical élan – a child of Haydn and early Beethoven, but declaring its own individuality, relishing the fresh tones of brass and woodwind over the strings. The slower movement had leisurely, pastoral tread. Something of a scherzo held a ravishing theme from the flutes, beautifully played. Elsewhere, trumpets and horns briefly suggested a more-gruff mood in search for new, somewhat darker sonorities. The finale was a delicious, nimble scamper, lightly taken in a tarantella-like swirl.

Beethoven’s Triple Concerto is an oddity, constrained by the glamour of having three starring instruments. (Originally the Archduke Rudolph of Austria was the pianist while two members of his household played the violin and the cello.) There are many solo passages (to render each instrument audible); otherwise the piano trio lands rather awkwardly in the midst of an orchestra, the piano distinguishable, the violin and cello less so. Still, it’s an exuberant, proud and tuneful work. The first movement has a welcoming thrust – rather held up, though, to give each solo instruments its solo spots. The slow movement hints that it could turn into something quite dark, but then decides to shut up shop. The last movement is a polonaise-showstopper with a jubilant swing.

Douglas conducted clearly from the piano, giving ringing and vigorous interjections on the keyboard. Chee-Yun’s sweet but rapier-like command of the violin soared sky-high, with minimum vibrato. Andrés Diaz’s tone was more pronounced and soulful, issuing from a different tradition if jarring against the extroverted vitality of the interpretation – and added nothing, for Beethoven’s ardour does not, here, lend itself to the throb of Romantic probing. Camerata Ireland gave vigorous, emphatic assistance.