Under its English music director Alexander Shelley, Canada’s National Arts Centre Orchestra from Ottawa – a capital city that sees fit to provide its citizens and neighbourhood with a performing arts centre including not only a 2,000-seater hall but also, as Shelley engagingly reminded us (he’s a good communicator), English, French and Indigenous theatre departments – is on an ambitious fiftieth-anniversary tour, “Crossings”, taking in London, Paris, Utrecht, Copenhagen, Stockholm and Gothenburg. It’s not the biggest orchestra (around seventy players) but it’s attentive, well turned out and disciplined, with some characterful players. On the job, making light of their abilities, they’re serious and precise; off, witness the effervescent second desk of first violins, forever chattering, they’re bright and animated. Friendship and team spirit seem well developed. 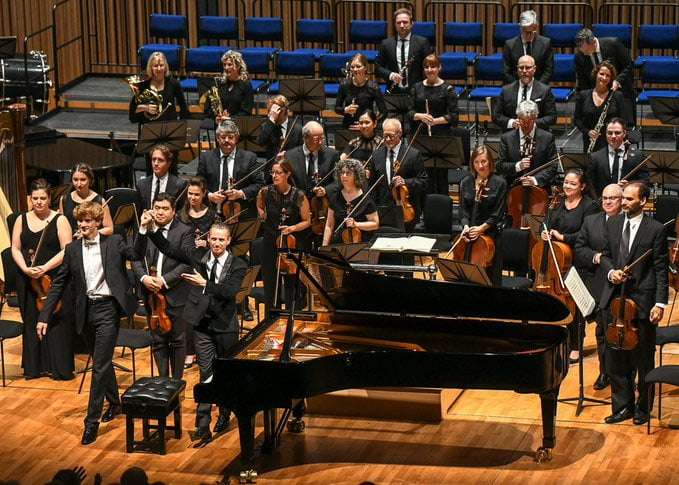 Drawing a generous, discerningly enthusiastic audience, this programme kicked off proceedings. Opened in 2013, Saffron Hall, like Snape Maltings or Cambridge Corn Exchange, is the kind of regional venue that has come to appeal to world-class orchestras and top-flight soloists seeking either one-off or pre-London warm-up dates (Thomas Adès, Emanuel Ax and Nicola Benedetti are scheduled over the next couple of months). Reaching over 35,000 a season and impacting on the cultural lives of some 10,000 young people, the room is a fully-functioning all-purpose space seating 740. The acoustics, not too dry, are winning, with enough headroom for the sound to bloom and carry. Physically one feels the bass resonances too.

Trained in ballet and drama before studying composition with Dušan Radić and Zoran Erić in Belgrade, Ana Sokolović, born in 1968, is a Serbian who has been living in Montréal since the mid-nineties. She enjoys a high Canadian profile. The first of her operas, The Midnight Court (“the plight of young women who lack husbands, clerical celibacy, free love and the misery of a young woman married to a withered old man”, after Merriman’s late-eighteenth-century Irish poem) transferred for a short run at the Royal Opera House in June 2006 (Linbury Theatre).

Golden slumbers kiss your eyes… (UK premiere?) for countertenor, chorus and orchestra is a half-hour cycle of seven linked songs (with the first repeated at the end) setting folk poems in French, English, Italian, Serbian, German and Ladino, ranging from lullabies to love-songs, children’s rhymes to flower-picking ditties and fertility dances. Carmina burana (distilled rather than copied) surfaces here and there. More surprisingly, Brahms, the tolling, repetitive kettledrum monotones at the start curiously evoking the introduction of the First Symphony at half-speed. “I lost my beloved for a trifle, all for a rosebud I refused to give her.”

Underlining Sokolović’s belief that “music comes from geography, or perhaps better put, place”, there is much here to demonstrate her vision and orchestral palette. Softly brushed percussion at start and finish but throughout also, like the murmur of rain or a distant tide kissing the shoreline, frame multitudinous rhythms, melodies and harmonies. Sokolović makes a point of driving home the beat. Some of her patterns are darkly menacing (the first song, “A la claire fontaine”, a symbol of resistance against the early British invasion of Quebec). Others are tersely energised (the rapid choral exchanges of the textually disquietening third; the earthily Afro-European Orff-ian patter of the seventh). The bells, chorus, interwoven linear tensions and triadic beauties of ‘Guter Mond’ (the fifth) aspire to the exceptional: one can envisage this going on to have a life of its own. Six minutes of masterpiece. Following, ‘Durme, durme’, a largely unaccompanied solo, is another glory, the ancient bones of the melismatic Judeo-Spanish original – a slow Sephardic melody known across the Balkans – left to speak for themselves, tremulously emotive.

The performance, in the presence of the composer, commanded attention, with distinctively strong orchestral and choral detailing, the ladies of London Voices regressing to childhood in the third number, ‘Mie mama mata mata, Lazarice’. David D. Q. Lee had his moments, his countertenor timbre and wide range lending an out of this world, disembodied dimension. He was at his best in ‘Durme, durme’, offering the words in a spirit of intimate, introspective wonder. Elsewhere, though, he lost some focus, the orchestra covering him, and while his melodic articulation was gauged (especially at speed) I found his diction debatable and his variably wide vibrato not always persuasive. It didn’t matter. The inventive personality of Sokolović’s creativity combusted decisively. “The imaginative countries we visit most often in our dreams…”.

Jan Lisiecki’s Ravel was agile and fleet-fingered yet, in the flesh, relatively shallow-toned, without that bigness of projection video/streaming directors and audio engineers customarily seem to bring to his renditions. Disinclined to ‘bite’, to seize the notes by the scruff – Argerich’s visceral, full-voiced, fantastical way isn’t his – he nevertheless had some nicely bluesy things to say in the middle movement, restraint notwithstanding. One particularly co-ordinated passage with harp in the first (Figure 22) aligned the work momentarily into a fragile double concerto. His encore, Mendelssohn’s early G-minor ‘Venetian Gondola Song’, from the Opus 19 collection of Songs without Words, was crystalline and Slavic in character, scaled to the lighter side of the Steinway.

Dvořák’s New World Symphony picked up steam following a relatively plain opening. The horn section was not always of the most secure, but strings (violas to the right of the podium) and woodwind held their own. In the Largo Anna Petersen’s finely judged cor anglas was pliant and free; the slightly delayed oboe triplet entry at Figure 4, above a sonorous viola/cello fifth, was wistfully longing; and the ten muted solo strings of the reprise spoke in blended, confiding fellowship. In the first movement, with exposition repeat, Shelley commendably refused to indulge tempo changes, holding back only slightly for the flute solos at Figures 5 and 12. The closing pages of the Finale spun a tale of noble spaces and celestial trails.

Bass drum in thunderous form, Brahms’s D-major Sixth Hungarian Dance (one that Brahms didn’t orchestrate) was the rousing encore, Shelley leaning back and into the music, his nuances and vigour informed with a keen sense of mid-European bravado, style and rubato. A happy tour looks in prospect.