Gilbert & Sullivan
The Pirates of Penzance or The Slave of Duty [Comic Opera in Two Acts; libretto by W. S. Gilbert with music by Sir Arthur Sullivan] 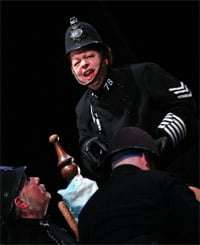 The Carl Rosa Opera Company has saved the best for last in its brief London season. “The Pirates of Penzance” is arguably the most popular of all Gilbert & Sullivan shows, with “The Mikado” and “HMS Pinafore” trailing in its wake.

In order to avoid the pirating of their latest show (neatly topical pun), Gilbert and Sullivan decided to premiere the opera in New York for copyright reasons. Until then their shows had been pillaged because copyright regulations did not extend as far as the US. To ensure that both the music and the text were not altered, and in an endeavour to receive royalties from American productions, they staged the premiere themselves in New York on New Year’s Eve, 1879, before anybody else could copy it. In fact, one day earlier it was also performed in the UK, again for copyright reasons, in a small, out-of-town production at, of all places, Paignton in Devon at the Royal Bijou Theatre. It was scheduled to play on 29 December but was in fact postponed for another day, no doubt because it was not ready to go. However, the British premiere sounds as if it was a fiasco, as the cast read from scripts and improvised their costumes. But at least it established the work’s UK copyright. 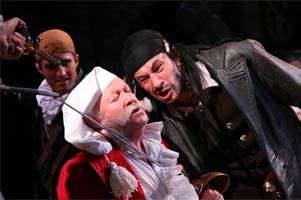 In New York matters were no better. In travelling to America, Sullivan had forgotten to take the complete score, which meant his having to re-write much of Act One on arrival. In desperation, not being able to remember the music he wrote for the entry of the ladies’ chorus, Sullivan borrowed his own music for ‘Climb over rocky mountains’ from an earlier opera, “Thespis”.

Notwithstanding, “The Pirates of Penzance” was an immediate hit with the public and critics and played for over three months. It also had a long run in London for 363 performances and has been constantly revived. Much later, in 1981, “Pirates” was even turned into a Broadway musical by Joseph Papp, of “Shakespeare in Central Park” fame, who beefed up the tempos and the action, giving it a run of nearly 800 performances. It also ran a good season in London at the Theatre Royal, Drury Lane, with George Cole as the Sergeant of Police. 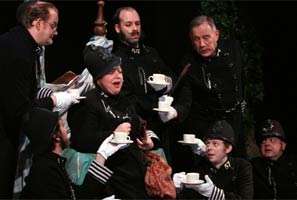 The plot is typical G & S topsy-turvydom. Apprentice pirate Frederic is congratulated on his coming of age, when he can be a fully-fledged pirate but, as he has always hated the thought of looting and pillaging, he is downcast. In fact he only became a pirate because his nursemaid Ruth, when told that her charge should become apprenticed to a pilot, misheard the occupation as pirate. Hence, Frederic’s predicament. He has also only ever known one woman, namely Ruth, a lady, as Oscar Wilde might say, of advanced years and terrible aspect, so has no idea that women can be both young and pretty. As he leaves the pirate band, orphans all to a man, with Ruth who, at 47 still thinks she can happily marry her 21-year-old toyboy, they meet a lot of young ladies, daughters of the (modern) Major-General Stanley. Falling for Mabel, Frederic promises to give up piracy. When the other pirates arrive, they too fall for the bevy of beauties, but the Major-General refuses to have a bunch of pirates as sons-in-law. Further complications ensue concerning the fact that Frederic was born on 29 February so is not actually 21, but technically only five years old!

Such arrant, albeit entertaining, nonsense only works with the right performances. As the Major-General, Barry Clark blusters to good effect in his solo ‘I am the very model of a modern Major-General’, while Steven Page, stalwart player, gives the Pirate King great panache as the head of a very assorted crew of fearsome-looking but too tender-hearted pirates. David Curry’s Frederic makes the most of his ‘innocent abroad’ appeal as the would-be intended of his aging nursemaid. Beverley Klein as said nursemaid Ruth belies the fact that she is supposed to be plain and merely “the remains of a fine woman”. She is both a fine singer and a great comedic presence. Deborah Myers looks and sings prettily as Mabel, but it is of course guest-artist and stand-up comedian Jo Brand who the audience is really waiting for, in the role of the Sergeant of Police.

Brand, dressed in policeman’s garb but still sporting bright-red lippy and nail polish, looks stereotypically funny and certainly brightens up the scenes in which she appears. Not bad at the dialogue, although her constant peering at the audience seems to hide an earnest plea that says “what am I doing here?”. She does, however, have a small singing voice. Heavily and closely miked she exhibits a somewhat flat vocal delivery for ‘A policeman’s lot’, but the performance is truly comic and she must be congratulated on doing what could well be a first even for G & S. Has any other female performer played the Sergeant of Police before?

Overall this is an enjoyable show, with Richard Balcombe keeping everything on course in the pit and Peter Mulloy’s direction and pretty, evocative designs keeping everything else in place. The choruses such as ‘Poor wand’ring one’, ‘With cat-like tread’, etc., ring out with great enthusiasm. This won’t be the last time we see the Carl Rosa company in the West End.