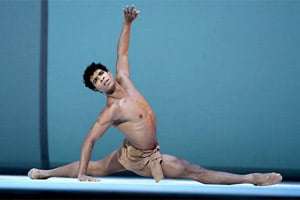 Well I suppose it depends what you expected. If you thought that in booking for Carlos in Cuba, the latest offering from the decidedly mixed Spring Dance at the Coliseum, you would get classical dance, sumptuous music and sets, you would be sorely disappointed. If you just wanted to sit back and watch Carlos Acosta letting his hair down with a few chums from Cuba in what amounts to a hastily cobbled together programme and all for £75, then all would be well. This programme is a serious disappointment and surely the three producers must be feeling a little uncomfortable with the cheap nature of the presentation and the thin choreographic content of this season’s closing show. It simply was not good enough and seriously compromised the credentials of what is an exciting development in the London dance scene.

Acosta is arguably one of the world’s finest classical dancers, and has entered the public consciousness in a way that is rare for ballet dancers – Nureyev, Fonteyn, Bussell all did, and he now has a following which extends well beyond the confines of the Covent Garden audience. But whether they will continue to follow him after his latest serving will have to seen.

Acosta opened his programme with that old Rocinante of a warhorse, the “Don Quixote” pas de deux, so familiar that has to be pretty spectacularly performed if it is to set any pulses racing. Alas, that was not the case on opening night, with a leaden and execrably recorded version of the score and a Kitri of technical aplomb but little else: Yolanda Correa, Principal with the National Ballet of Cuba either struck the frozen smile of a Starbucks barista or set her chin in grim determination to nail yet another interminable balance. I found her dancing soulless in the extreme and even her fouettés seemed weighted with the implacable desire to spin as much as any human could or would ever want to do. That it all meant nothing, and indeed was unmusical and un-engaging seemed irrelevant. Acosta is made of subtler stuff, and even though he must have danced more Don Qs than most people have seen ballets, he injected impressive control and grace to his solo, unleashing his full talent in the coda.

A strange beginning however, given that it was followed by two pieces by the young Cuban George Céspedes, whose idiom is contemporary dance suffused with Afro-Latino moves and rhythm. If they had been student works by apprentice dance-makers, one could have smiled beatifically and said ‘well done’, for there is some talent hidden beneath, but the thinness of the invention and the episodic nature of his choreographic vision meant that his work was simply not good enough for a main stage in the capital. The dancers from the Danza Contemporánea de Cuba are a mixed bunch with some very impressive dancers mixed in with the slightly more leaden, but the material, which may be cutting-edge in isolated Cuba looks over-familiar and dated to London eyes. “La Ecuación”, was for a quartet of three women and a man. Utterly inexplicable from both the dance and the quotation in the programme “truth is beyond all explanation, so it is better to consider a question than to receive an answer”, it pottered along in a sequence of poses and jumps with an open cube. Ho hum. “El peso de una isla” allegedly explores “the concept of Cuban identity and the contrast between the stereotype and the reality”. There was much running to and fro and hurling oneself to the ground to the painful percussion of X Alfonso and the ever-repeated refrain of what sounded like “duck pond…now!”. I never want to see it again.

The performance ended with the “Tocororo Suite”, a set of bleeding chunks from Acosta’s rags to riches, semi-autobiographical dance spectacular which he created in 2003. It doesn’t work. I really didn’t like the original, but the ‘ballet boy from the country learning urban moves and rhythm’ story was at least developed – it could not hope to be in this disjointed set of ensemble dances, performed to the tiresomely percussive score. Acosta works hard to portray the country hick, but the super-star of the world ballet cannot for one moment disguise his nature, just as his classical technique stands out against the more earth-focussed movement of the contemporary trained co-dancers.

It was a sorry evening.