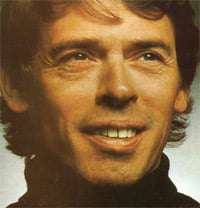 Belgian-born singer-songwriter Jacques Brel (1929-1978) found most of his fame in France and singing mainly in French. At the age of 24 in 1953 he was invited to perform in Paris in the cabaret clubs on the Left Bank and it didn’t take him long to find success, for within six years he was topping the bill at the Olympia. During that time he honed his song-writing skills under the influence of various musicians and co-writers such as François Rauber and Gérard Jouannet while also working with the likes of Maurice Chevalier and Michel Legrand. From the 1960s onwards his chanson style changed to become more philosophical about life and the struggle to survive it. His themes dealt with the problems of living and dying and his songs commented on society, religion, love, friendship – the big issues that concern us all. He seems to have been a natural pessimist, hated hypocrisy and was totally against conformity in any aspect of life. His, however, was a short life: he died before his fiftieth birthday.

His music was not always pessimistic and he covered a whole range of emotions from the outright comic to the darker sides of introspection. Brel wrote his lyrics in a poetic rather than pop genre although his shows drew huge audiences more akin to pop-concert capacity than intimate cabarets. He sold over 25 million albums and his work was also taken up by many popular singers of the day, most notably Scott Walker, Dusty Springfield, Shirley Bassey and David Bowie, and Frank Sinatra, Nina Simone, Ray Charles and Barbra Streisand have covered his work, while Rod McKuen sang Brel’s songs in English translations which, however, didn’t always capture the essential spirit of Brel’s output. The more recent translations sung by the likes of Barb Jungr have stayed closer to the originals. Brel believed his words were more important than his music, although the melodies for his songs are often wide-ranging and in their own way quite exceptional, standing well in comparison to the work of Kurt Weill, Hanns Eisler or Friedrich Holländer.

In 1967 he drew away from singing to concentrate on acting (he appeared in “Man of La Mancha” and made several films), writing and directing and to further his passion for aeroplanes and yachts. His last film, “L’Emmerdeur”, was particularly impressive – Brel played a man about to commit suicide in the hotel room next door to where a hit-man is preparing to kill a witness to a crime. He also appeared in the film version of Mort Shuman’s “Jacques Brel is Alive and Well and Living in Paris”, a revue based on the songs of Brel, in which Jacques sang ‘Ne me quitte pas’. Two years earlier he had set off to sail around the world, but ill-health put paid to that when he contracted lung cancer through years of chain-smoking. He eventually retired to the Marquesas Islands in French Polynesia. When he died in 1978 his body was laid to rest just a few yards from the grave of Paul Gauguin.

The reason for this Barbican Hall concert was to mark what would have been Brel’s eightieth year. David Coulter organised the event, gathering together many of the artists who still sing Brel’s songs. It’s impossible to know what Brel thought of other singers performing his songs. The royalties must have been useful when Brel gave up singing, but the songs are so personal, it must be like seeing your children being adopted by strangers. And his songs do lose in translation. That said, their popularity with other singers cannot be denied – there are over four hundred versions alone of ‘Ne me quitte pas’ in various languages.

House Band accompanied the artists, and was made up of keyboards, strings, woodwind, brass, guitar, saxophone, ondes martenot, percussion and harp. However, for such a large group, did everybody need to be amplified for no good reason, excerpt to make a real blast of a sound? Brel does not need this treatment. Even the piano was amplified to the point of distortion, not to mention discomfort to the audience.

The show began with Momus (Nick Currie), erstwhile pop artist and cultural icon, who began with a turgid version of ‘Ne me quitte pas’ and didn’t do much better with ‘La ville s’endormait’ and ‘Les bourgeois’. The last song seemed to have been updated to include references to Richard Dawkins and Robbie Williams, presumably somebody’s idea of our bourgeoisie today.

Arthur H (Higelin), French pianist, songwriter and singer, performed ‘Sur la place’, ‘Je suis un soir’ and ‘Madeleine’, but again in a deadly downbeat way. Diamandas Galas, the Greek-American musician and performance artist who has worked with Xenakis, Globokar and John Zorn, was perhaps the most extraordinary performance. Well-known for her three-and-a-half-octave voice, Galas often shrieks and howls in performances that have been described as “capable of the most unnerving vocal terror.” Brel’s ‘La chanson des vieux’, ‘Fernand’ and ‘Amsterdam’ were given an extraordinary going-over; in fact they were almost mugged to death. ‘Amsterdam’, one of Brel’s most famous songs, was even booed in some quarters of the Barbican audience. It was indeed a very disturbing sound and quite unnecessarily idiomatic in the style of Galas’s guttural rasping, performed unstintingly to her own painfully over-amplified piano accompaniment.

If the first half of the evening was like being at a wake rather than the celebration it was supposed to be, the second half cheered up a little. Irish singer Camille O’Sullivan originally studied architecture but gave it up to be a musician and burlesque cabaret artist – she usually changes costume during her set, as she did here. Her own arrangement, however, of ‘Marieke’ was performed a cappella in a breathy but, again, amplified way that really did nothing for the song or even Camille’s voice. She then stripped off a little and flashed her legs for ‘Les vieux’ and ‘Au suivant’, which were better all round. In her introduction about why she performed Brel’s songs, she admitted that they portrayed life’s miseries and were rather like “corns set to music.”

Arno is the Belgian singer Arno Hintjens who has been compared to Serge Gainsbourg and Tom Waits, on account of his guttural delivery. One of his albums, songs he mostly wrote and sang in English, had a single French number in which he recited the phrase “Qu’est-ce que c’est?” about forty times or more. His most famous track is Brel’s ‘Le bon Dieu’ which he not so much sang as uttered the words in a tired and emotional way. ‘Bruxelles’ is another of Brel’s most celebrated songs, and ‘Voir un ami pleure’, both of which Arno performed in his own distracted way.

It was left to Marc Almond (remember Soft Cell?), who has devoted one of his albums solely to the songs of Brel, to inject some real life into proceedings and what a joy it was. He at least has a pleasant but strong delivery that opens up to the audience as one assumed Brel himself did in an effort to engage with his listeners. Almond moved about the stage, using body-language to communicate to the audience and put Brel’s songs over much in the way that the singer-songwriter himself would have done, with a vestige of humour, black or otherwise, but without all the po-faced posturing that had gone before. Almond brought true spirit to his performances of ‘Le diable ça va, ‘J’arrive’ and ‘La valse à mille temps’, the famous ‘Carousel’ song which ended his set with joie de vivre. He appeared to be singing to us, the audience, whereas some of the other performers were singing to themselves. At least the finale by Momus, Camille and Marc in ‘La chanson de Jacky’ ended the evening on an up-beat. What began as a mournful recital finished with a song of praise, and for that relief much thanks.