Catherine Ennis is one of the great movers and shakers in the organ world. She has played a big part in securing some great new instruments for London, including the magnificent Klais at the church of St Lawrence Jewry, where she is music director. I am pretty sure this was her first Royal Festival Hall recital since the organ’s restoration was completed in 2014, although she had performed on it before it was dismantled for the venue’s refurb, started in 2005 – that was around the time (under Jude Kelly’s watch as the Southbank Centre’s artistic director) when there were rumours that the organ might not be replaced, even that some of the pipes had gone missing – and she campaigned vigorously for its complete restitution. 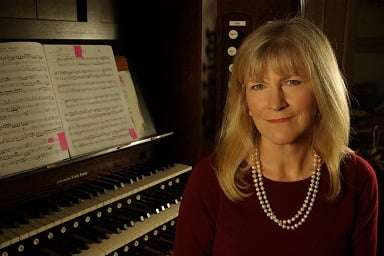 Ennis’s current recital included J. S. Bach’s ‘Sei gegrüsset, Jesu gütig’ variations, a work that the Harrison & Harrison instrument’s first curator, Ralph Downes, kept in his repertoire (and recorded on the first commercial recording on LP, the Pye label, if memory serves), and I’ve heard Ennis play it before (at St Lawrence) with the same grasp of its variety, its considerable beauties and accumulative power – and, it must be said, more cleanly. It’s a given that the RFH acoustic leaves nowhere to hide, and it exposes the organ cruelly. Ennis’s registrations, for a work that thrives on them, were stylish and sang out, but I reckon some of her tempos tried to accommodate the ambience. Hence she took the elaborately decorative aria of the first variation too breathlessly, involving a couple of destabilising, operatic rallentandos to get all the notes in, but otherwise Bach’s contrapuntal games came over firmly – and she really scored with a moving account of the penultimate section, a Chorale Prelude of sombre serenity in which the last two lines of the melody is split into two voices, an inspired moment that puts it in the same league as the Goldberg’s ‘Black Pearl’ variation (also in G-minor).

There was a tempo issue in the Vierne, the fame of which, as with Widor’s Fifth, relies on its final movement. Here Vierne’s was on the stately side, so some of the sheer thrill of it went by the way. But she made the earlier movements – five of them – for once sound as though there was a symphonic plan, she scored it in grandiloquent French style, and turned the clipped acoustic to her advantage in the discreetly sensuous ‘Pastorale’, with some heavenly registrations yielding the sort of detail you normally only hear on recordings – there were a few moments when it couldn’t have sounded more Mahlerian if it had (cow)bells on it, and she had a saucy time with the neat Scherzo.

She opened with a sturdy performance of Mendelsohn’s Sonata in D-minor, a piece of four variations and a fugue, which bloomed with Lutheran confidence and showed off Ennis’s lissom footwork, not to mention the subtlety of the organ’s foundation stops in the opening ‘Our Father’ tune. The floating opening to Saint-Saëns’s Prelude and Fugue didn’t exactly take off in the dry acoustic, but Ennis built in a fine escalation of intensity.

There was more French music in Ennis’s encore, her arrangement of the attractive piano piece Autrefois by Cécile Chaminade, thus including a piece by a female composer and deferring to the Society of Women Organists with whose founders she held a discussion before the concert.