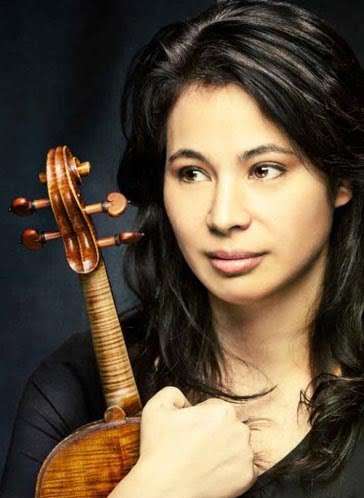 Orchestral programmes devoted to the Classical era are hardly frequent and this CBSO concert was the more memorable for being conducted by Reinhard Goebel, director of Musica Antiqua Köln for over three decades and whose commitment is evident in every bar.

An enterprising programme too, not least for including Mozart’s ‘seventh’ Violin Concerto. Probably written in Paris during July 1777, this was relocated in 1837 and only published in 1907. Championed by Enescu and his protégé Yehudi Menuhin, the piece has never been free from doubts as to its authenticity, though (unlike the ‘sixth’ Concerto, K268, latterly thought to be by Johann Friedrich Eck), it does convey an intrinsically Mozartean quality as warrants its revival – not least when rendered with such conviction as by Mirijam Contzen.

Richer in texture and more questing harmonically than the five Violin Concertos Mozart had written in Salzburg, the work is no less finely conceived in terms of the relationship between soloist and orchestra – whether in the muscular expansiveness of its opening Allegro, elegant finesse of an Andante whose pizzicato element is evocatively applied, or a final Allegro of unforced buoyancy. Contzen and Goebel entered-into its spirit with real belief, the former’s cadenzas striking a judicious balance between expressive poise and formal continuity.

There has never been any doubt over the authorship of the ‘Linz’ Symphony, written at pace at the beginning of November 1783 and a piece which, though it may lack the panache of the ‘Haffner’ or grandeur of the ‘Prague’ Symphonies, has wit and immediacy to spare. After a forceful but never portentous introduction, the first movement was incisively. More questionable was Goebel’s brisk take on the Andante, both first- and second-half repeats observed to give this comparable weight with the outer movements, yet also with an unyielding quality that not even the felicitous playing could quite offset. The Minuet was enticingly done, its Trio abounding in genial woodwind interplay, and then a deftly contrapuntal Finale saw the work home with its winning combination of grace and impetus.

These substantial works were framed by music from two operas of this period. He may have gone down in history as “the English Bach”, but Johann Christian might well have been thought ‘the French Mozart’ with his final stage-work Amadis de Gaule. Enjoying only a passing success at its 1779 premiere and not revived until 2012, the Overture has a propulsion and its central section a gravitas that belies the composer’s reputation as a musical gallant; and this carries through to ballet music which recalls Rameau in its vigour and invention.

It may have appeared just two years later, but Mozart’s Idomeneo proved a game-changer in terms of his output as in that of opera as a genre. He himself wrote the ballet music, usually heard at the end of the second Act and which makes up for what it lacks in inspiration with its sheer immediacy; Mozart combining the formal rigour of a chaconne with the theatricality of individual cameos, and a thrilling final crescendo. Suffice to add Goebel spurred the CBSO on to playing of effervescence such as brought the concert to an impressive close.