Hard on the heels of Birtwistle at 80 at the Barbican Centre comes Haitink at 85, with this the second concert in three days celebrating the conductor. Despite his many years with the Concertgebouw Orchestra, British audiences have long since taken Bernard Haitink to their hearts, through his music directorships at the London Philharmonic, Glyndebourne and the Royal Opera, let alone his annual Proms appearances (85 concerts so far since 1966), and latterly his Indian summer with the LSO. Another of his late-flowering relationships has been with the Chamber Orchestra of Europe – following in the footsteps of the COE’s relationships with other greats of the conducting firmament (Abbado, Harnoncourt and – relative newcomer – Yannick Nézet-Séguin). 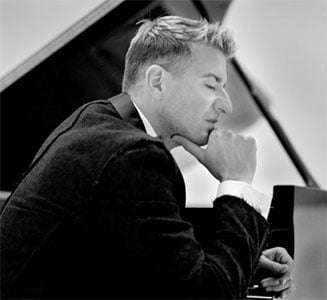 This second concert moved from the first’s German repertoire to a French first half and Classical second – relative rarities for Haitink. His recordings of French repertoire are celebrated, but this music appears infrequently in his London concerts, so it was a rare treat to settle down to Ravel’s Le tombeau de Couperin, and its four orchestrated memories of friends lost in World War One, and the G major Piano Concerto with Jean-Yves Thibaudet who, the programme announced, was playing without fee in honour of the conductor.

Haitink’s renowned abilities for clarity and architecture are just as paramount in French music and his ear for instrumental detail impressed immediately. Of course, it doesn’t harm your case if the players are some of the best in the world. I’m told there are 16 original members of the Chamber Orchestra of Europe still playing. In a correction slip in the programme many of the principal players (and others besides) were different to originally published – not least the star of the opening Ravel: Kai Frömbgen, principal oboist of the Budapest Festival Orchestra. Le tombeau de Couperin is virtually an oboe concerto. 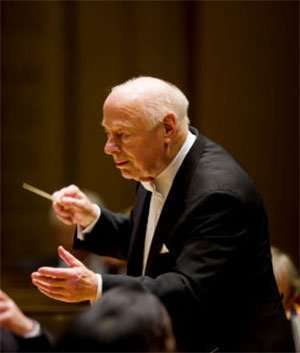 Compatriot Rachel Frost, swapping to cor anglais, had her own moment of glory taking the melody from Thibaudet in the slow movement of the Concerto. A series of sneezes and coughs had momentarily disrupted my concentration on Thibaudet’s musings at the beginning of that Adagio, but thankfully not the performers, who instilled Ravel’s score with bags of personality and – from the whip-crack opening to the boisterous finale – fizz, including from John Chimes on smaller-sized timpani. Yet the moments of calm – the contrast that allows the rest to bubble so winningly along – made perhaps even greater impact, not least the stillness that Charlotte Sprenkels brought to the harp’s rippling music in the first movement. Thibaudet himself, perhaps more sober (in dress as well as playing) than expected, made a consummate contribution – in repertoire in which he excels – and offered an encore, more Ravel, his Pavane pour une infante défunte.

After the interval was Mozart’s G minor Symphony, No.40, in the second version, adding clarinets. In some senses the musical textures were the densest of the evening, though never heavy. The question of influence of ‘period’ performance practice seemed irrelevant, as Haitink moulds Mozart just as organically as in later repertoire. With the majority of repeats respected, this was 34 minutes of pure musical heaven. At the end the COE members joined the audience in applauding Haitink in a hugely successful birthday celebration, albeit three months late. Fingers crossed that this partnership will not be absent from these shores for too long.