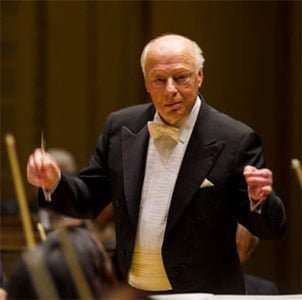 At the age of 85 Bernard Haitink seems at the height of his powers. He was always a very good conductor, but age and experience have brought even greater insights and sensibilities. It seems a pity that most of his many commercial recordings were made before his present elevated artistic level. Haitink has always been the kind of artist who puts his energies and imagination solely at the service of a composer.

So it was in Schumann’s Manfred Overture, a beautifully shaped, superbly paced, warm and sensitive account of this wonderful piece. Haitink’s direction is as energetic and precise as ever it was and he was rewarded, as throughout the evening, with superlative playing by the COE at rather more than chamber strength. (The distinction between “chamber” and “symphony” orchestras is becoming blurred.) 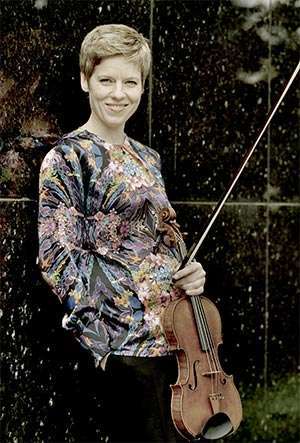 In Alban Berg’s Violin Concerto, Isabelle Faust was technically immaculate and musically sympathetic. But she doesn’t have a big tone quality, and she didn’t dig far enough into the music’s highly charged emotional content. It’s possible that the ungainly looking microphone placed in front of her gave BBC Radio 3’s listeners a more flattering perspective and provided a better balance, since heard in the hall there were one or two important solo passages where Faust was buried under the orchestra. In this respect Haitink might have kept the brass section under more control.

In the ‘Pastoral’ Symphony Haitink generally opted for fairly swift tempos, and it was good to hear the exposition repeat in the first movement. But the music never seemed driven. The superlative COE members always had room to breathe, and the performance in general was buoyant rhythmically, very expressive, clean and clear. The strings in the second movement were outstandingly lovely; the ‘Peasant’s Merrymaking’ was brisk, but nimble and joyous, interrupted by an incisively executed, quite violent ‘Storm’, and in the ‘Shepherds’ Hymn’ Haitink simply allowed the music to flow, achieving an affecting quality of calm but uplifting serenity.

It’s seldom that a concert contains works that all end quietly, as on this occasion, but this did not prevent an outpouring of affection from the audience at the end of the evening, with roars of appreciation and prolonged applause for the tired-looking but obviously satisfied Bernard Haitink.