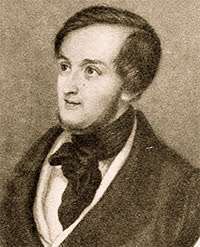 It might seem a little odd, at a time when the earlier operas of Verdi have often been revived as concert performances and staged, that those Wagner wrote during the 1830s are very seldom heard – not least in a year which promises a surfeit of the ‘canonic’ operas and music-dramas. All credit to Chelsea Opera Group (which mounted an inevitably yet intelligently abridged version of Rienzi in 1999) for putting on a concert presentation of Die Feen (1833) – the 20-year-old composer’s first completed opera, which waited until 1888 to be heard and has not been given in the UK for at least three decades. Compared to its immediate successors, it may lack the musical immediacy of Das Liebesverbot or the theatrical grandeur of Rienzi, but in so avoiding the stylistic pandering of the former and the overreaching ambition of the latter, it thereby attains an all-round consistency such as Wagner was not to surpass until Der fliegende Holländer over a decade hence. And, as a first opera by a composer whose conviction was based largely on instinct, it has a lot going for it even today.

With its libretto (by the composer – from the start, Wagner was his own man when it came to the theatre) rather quirkily derived from Carlo Gozzi’s play La donna serpente, Die Feen feels a mishmash of the archaic and the fantastic of a kind Wagner was to disown. That said, it is also a compendium of those issues and situations to which he had recourse time and again throughout his career: most notably the interaction between human and mythical worlds, the question of identity and the need for its concealment, and the now vexed concept of female redemption so as to redeem the male figure. Musically it veers between the thrusting heroism of Beethoven’s Fidelio and the heightened dramatics of Weber’s Der Freischütz, with a fair dash of the shameless theatrics of Marschner’s Der Vampyr into the bargain, yet the result is a vital amalgam of early Romantic idioms and a blueprint for German opera into the mid-nineteenth-century. Wagner may well have lost interest almost on completion, but that it served as a springboard for all his future endeavour is unarguable.

This no-frills concert performance enabled one to focus on the collective strength of the cast. In the principal roles, David Danholt veered convincingly between fearlessness and helplessness as Arindal, torn between saving his kingdom and honouring his wife, while Kirstin Sharpin rose to the challenge of Ada – the archetypal ‘fairy queen’ caught between the human and the spirit worlds, and whose epic Act Two scena was the highlight it needed to be. Mark Stone made a dashing impression as Morald, while Elisabeth Meister was thrillingly cast as Lora – making it more the pity that Wagner gives this character so little to do during the final Act. Andrew Slater was bluffly dependable as Gernot (unerring forerunner of Kurwenal and Gurnemanz), Andrew Rees was a suave Gunther, while Eva Ganizate and Emma Carrington complemented each other as respectively sympathetic and scheming fairies Zemina and Farzana. There were no failings elsewhere – not least Piotr Lempa, making the most of his timely appearances as Groma and the Fairy King.

The COG Chorus rose gallantly to its (in Wagnerian terms, at least) conventional function – a little under-strength in the male registers, perhaps, but rarely other than disciplined and alert as trained by Deborah Miles-Johnson – while the COG Orchestra overcame minor fallibilities of execution to give a vivid and compelling account of a score as confirms Wagner to be a dedicated yet already exacting master of his craft. Dominic Wheeler rarely disappoints in operatic performances, and his dynamic projection of the expressive highpoints coupled with ample attention to detail enabled one to appreciate orchestral felicities the more fully. Most crucially, he was unfailingly adept when maintaining musical as well as dramatic continuity over those scenes where Wagner’s sense of the inevitable is not quite what it was later to become. A pity that the customary excision of the Act Two duet for Gernot and Drolla was observed, as its deadpan humour sets the surrounding heroics more tellingly in relief, but this was a minor fault in what proved to be an enjoyable and often enthralling evening.