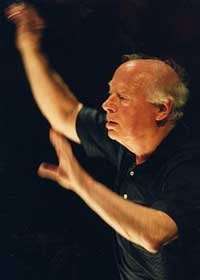 Under Principal Conductor Bernard Haitink, the Chicago Symphony Orchestra presented a program that showcased the legendary ensemble’s enormous strengths, but also some notable changes that have been made in the brief period since Daniel Barenboim ceded the music directorship. The orchestra’s uncanny rhythmic precision, incisive playing and enormous sound now enjoy richer, less edgy strings and a somewhat warmer brass sound that still manages to raise goose-bumps. Haitink and Pierre Boulez, who holds the title of Conductor Emeritus, have managed to both maintain the orchestra’s inimitable sonic character that traces its origins to the music directorships of two legendary maestros, Rafael Kubelík and Fritz Reiner, while leaving their own mark.

Haydn may not be the first composer that comes to mind when you think of Haitink, but it’s clear that he has an affinity with the ‘Clock’ Symphony. The opening movement’s introductory Adagio showcased the strings’ rich sound; the first portion of the Presto wasn’t quite as incisive as expected, but the players seemed to compensate quickly. The ‘tick-tock’ accompaniment of the ‘Andante was played with uncanny precision — and the melodic material conveyed in a beautiful cantabile. Haitink and the players deployed a sophisticated mix of attacks and phrasing that brought surprising and unexpected musical contrasts in the fleet finale. 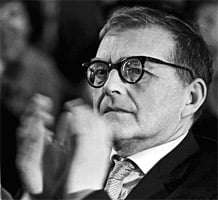 The Fourth Symphony of Shostakovich is a Mahler-scale work that Shostakovich began in 1935 and completed. The following year he withdrew it following the Communist party’s official condemnation of the composer’s “Lady Macbeth of Mtsensk” and, apparently, complaints conveyed through party channels from Leningrad Philharmonic loyalists who were rehearsing the work and claimed that it was not only unmusical but unplayable. The work places enormous demands on every player of the outsize orchestra, the largest called for in Shostakovich’s symphonic output.

The structure of the sonata first movement consists of a short exposition, a massively long development section and a brief recapitulation, pushing the form to its limits. The scherzo builds from a slow opening waltz to a mighty, rattling climax and a quiet ending (over the rhythmic tapping of castanets). The finale begins with a funeral march that draws on the tradition of Beethoven’s ‘Eroica’ and Mahler’s symphonies, transforming (quite seamlessly in Haitink’s hands) into a three-four dance rhythm, building to what one thinks is a glorious tutti with the brass blaring a triumphant — but more and more dissonant — chorale that dissolves into a bleak landscape occupied by a C minor chord, and a celesta and trumpet leaving matters decidedly tense and unsettled.

The orchestra navigated this enormously complex work with unfailing precision and detail; the many chamber-music-like sections were conveyed with amazing balance and clarity, and the dramatic climaxes were projected with a transparency and detail that were mind-boggling. Granted, Shostakovich had a very different-sounding orchestra in mind, but the Chicago Symphony’s signature-sound fits this music exceptionally well — and Haitink’s control of tempos and balances was as near-perfect as one would want. The notoriously difficult, rapid-fire string fugato toward the end of the first movement was one of the most breathtaking demonstrations of virtuoso-orchestra string-playing I have ever heard. And the finale’s ending climax was played without stridency, revealing layer upon layer of Shostakovich’s orchestration in almost x-ray relief.

The one crucial element that was missing was Shostakovich himself. The work was conveyed with plenty of slam where needed, beautifully sustained melodic lines, a wide palette of colors — but no real sense of danger, menace or emotional involvement. And while the fortissimos were just right, the pianissimos weren’t quite pianissimo enough.

All in all, the Shostakovich may have been a disappointment, but it still goes without saying that the CSO remains a “must-hear” ensemble whenever it visits Carnegie Hall.