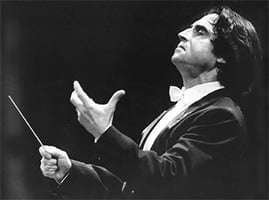 The three-evening visit of the Chicago Symphony Orchestra and Riccardo Muti to Carnegie Hall ended as spectacularly as it had begun, coming full circle from ‘O Fortuna’ (Carmina Burana) to the ‘Epiphany’ of Feste Romane. Both works trace their roots to history – Carl Orff setting 11th- to 13th-century texts, while Ottorino Respighi reaches even further back for inspiration to the glory days of the Roman Empire. The least-performed work of his Roman Trilogy, Feste Romane (Roman Festivals) was the last to be completed after The Fountains of Rome and The Pines of Rome. It was premiered at Carnegie Hall in February 1929 under Arturo Toscanini, perhaps an incentive for Muti to bring it back to the venerable auditorium.

Feste Romane perfectly suited both conductor and orchestra. The Chicago Symphony is renowned for its brass section which, augmented on by three trumpets posing as buccine, immediately brought to mind the threatening and clamorous atmosphere of the Circus Maximus. Reminiscent of the opening of Richard Strauss’s Elektra, the first movement, ‘Circenses’, features some of the loudest and most dissonant passages the composer ever wrote, and the CSO spectacularly brought out both aspects to the fullest. In the second movement, ‘Il Giubileo’, Muti perfectly built up the long procession to a powerful climax, vividly bringing to mind scenes from Cecil B. DeMille’s epic movies. Trading fanfares, the horns and trumpets then launched into a fleet ‘L’Ottobrata’, which showed off the virtuosity of the woodwinds, eventually leading to Respighi’s “long call”, expertly performed, as were his subsequent solos, by first horn Dale Clevenger. This movement sounds less medieval and more a soupy Italian movie score. The finale, ‘La Befana’, its cacophonic eclecticism seeming to embrace elements of Stravinsky’s Petrushka and Bartók’s The Miraculous Mandarin, gave the brass sections and principals their moments of glory, so too the clarinets and the extensive nine-player percussion section plus timpani. Feste Romane ends in spectacular fashion. Muti let it speak for itself.

The Respighi was preceded by Martucci’s Notturno, a pleasant but rather inconsequential work by one of the few, or perhaps the only, Italian Romantic composer who never wrote an opera. Nevertheless, Muti in a short speech dedicated the work to Marilyn Horne for her contributions to Italian opera.

For the first half of this concert of lesser-performed works, Muti selected Dvořák’s Fifth Symphony. F major immediately brings to mind Beethoven’s ‘Pastoral’ Symphony, and indeed the first movement evokes some of the same moods as its famous predecessor. Against the composer’s objections, Simrock decided to publish it as his Third Symphony with the arbitrary opus number 76, although it’s an early work which does not reach the heights of craftsmanship and inspiration of the last three symphonies. The transition between the second and third movements seems stuck on, and in the finale Dvořák, alternating between minor-mode dramatic sections and a hyper-Romantic chromatically falling melody, gets caught up in endless, sequential repetitions of the opening theme. Muti gave a straightforward, almost understated reading. However, at times he allowed the brass to overpower the string section, which did not always produce the warm, central European sound one hoped to hear. Nevertheless, the second movement was notable for the contributions of the cello section, and, above all, the fine playing of flutist Mathieu Dufour.