Sleeping Arrangements
A musical with book, music & lyrics by Chris Burgess, based on the novel by Sophie Kinsella 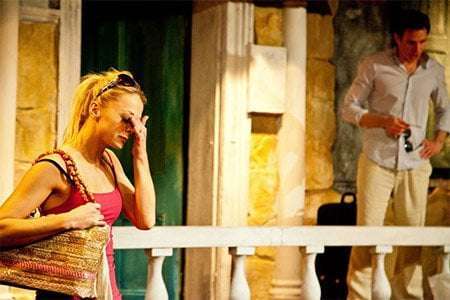 Musicals are coming thick and fast at the moment, at least to London fringe theatres, such as Bare: The Rock Musical, The Billie Holiday Story, Buerk! The Newsical, Geek!, The Revenge of Sherlock Holmes, Rooms – A Rock Romance, and, now, Sleeping Arrangements. Add Sondheim’s Merrily We Roll Along, Once, and, soon to be joining them, Charlie and the Chocolate Factory, along with all the long-runners, and London really is alive with the sound of music.

Out of the above I would select Sleeping Arrangements for your attention. It’s that rarest of theatrical commodities, the good British musical. The most recent one to emerge in that genre was Lionel Bart’s Quasimodo, which bafflingly had to wait some fifty years before seeing the light of a staging.

Sleeping Arrangements is a jaunty little piece that should please a wide audience. It is a simple enough story although there are complications. Adapted from a novel by chick-lit writer Sophie Kinsella (author of Confessions of a Shopaholic), it tells of two London couples from Putney and Walthamstow who plan separate holidays to Andalucia but find they are booked into the same villa with not enough bedrooms. Both couples ostensibly are unknown to each other, although they have a mutual friend who made the unfortunate booking. Having arrived in sunny Spain they decide to make the best of it. Hugh and Amanda have brought their newly-born twins plus nanny Jenna, while Phillip and Chloe have a 16-year-old son Sam. 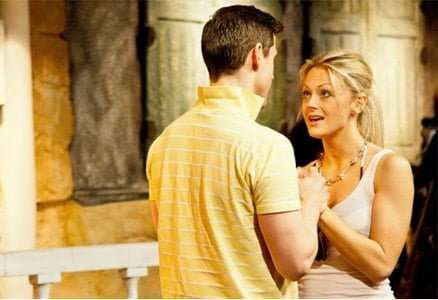 It turns out that Hugh and Chloe do know each other; in fact more than just know, they had a child before they split up for reasons misconstrued at the time. How can they keep the secret or do they really want to stay apart? Anyway, they end up in bed to talk through the situation. Meanwhile, young Sam has taken a shine to the attractive Jenna and at 16 his hormones are ready for anything. Several alcoholic bottles later – the excuse is that they are having a wine-tasting – they all come to their senses but not before the absent friend who set them up has thrown them a lifeline. It’s all a bit like Private Lives crossed with Così fan tutte.

This is the ideal situation for a rom-com musical set in gorgeous climes. When Chris Burgess read the novel he says that “I couldn’t help but hear songs…”. His music offers some upbeat tunes coupled with witty and clever lyrics. The book is pared down to a manageable size and, perhaps because the original novel is so carefully worked out, the plot flows easily and naturally.

The piece opens with a song about ‘Monday morning blues’ and having to fly from Heathrow to somewhere in the middle of nowhere. Then the next day it’s the ‘Tuesday morning and why am I here blues?’ as the characters are stuck out miles from civilisation. Gradually they all adapt to new surroundings and enjoy the holiday. Unfortunately they are poles apart. Hugh and Amanda are well-off and can afford designer clothes, while Phillip is about to lose his job at the bank, having given up what he really wanted to be – a musician – in order to keep his family. To quote Amanda: “You can tell they’re struggling – he was wearing Primark!”.

The cast is uniformly good. Liza Pulman, with a voice as big as all outdoors, gets the best of the songs. However they all make telling contributions, with Steven Serlin as Hugh trying to pick up again with Chloe, played by Jenny Gayner who is not so sure and is loath to leave Philip, taken by Grant Neal, who cannot win as he has no prospects. Sabrina Aloueche as Jenna is a sort of catalyst who gets everybody going, especially Sam, Adam Pettigrew having the most difficult task in persuading us he is a lovelorn adolescent mother’s boy. He convinces well enough. By the end of the show he has grown up, a little.

The band under Colin Billing handles Burgess’s score with infinite ease and director Robert McWhir keeps things rollin’ along very nicely. Sleeping Arrangements is a show with legs that will be popular wherever it appears.