Christian Gerhaher and Gerold Huber have had a long and highly successful career interpreting the Austro-German Lieder repertory since they studied together at the Opera School of the Academy of Music in Munich. They have recorded Mahler’s songs for Sony, and their intricate partnership in interpreting this music was evident. 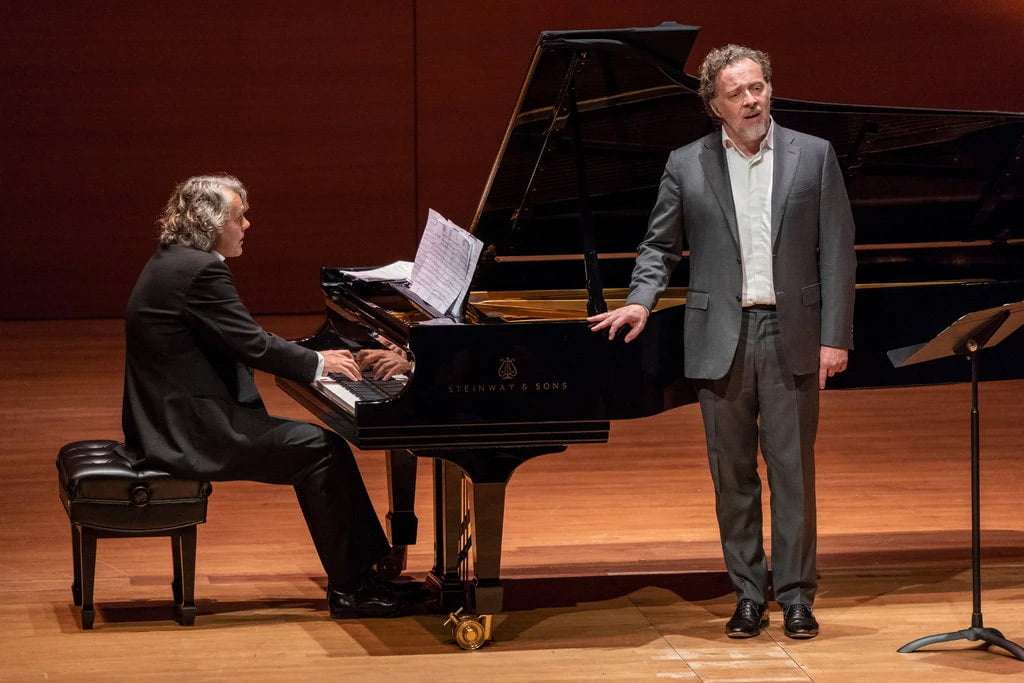 Gerhaher’s high baritone voice has limited breadth and relatively moderate resonance, yet within these boundaries produces a smooth sound and features a stunning mezzo-voce at the high end of his range. His essentially traditional stylistic approach places due emphasis on the musical line, while communicating the texts, especially in the narrative songs, with effective and thoroughly idiomatic expression. Notwithstanding these positive characteristics, however, his light baritone timbre might not have been Mahler’s first choice for these songs.

Gerhaher’s reading of the ‘fahrenden Gesellen’ Lieder was delicate and sensitively expressive, enhanced by subtle rubato phrasing in the accompaniment of the first two songs. His treatment of ‘Ging heut’ morgen übers Feld’ (I went through the fields this morning) — familiar from its use in Mahler’s First Symphony — appropriately balanced the juxtaposition of extroverted wedding-dance music with the introverted reaction of the jilted lover who views the celebration at a distance. The final line, “Mit nimmer blühen kann!” (“The happiness I hoped for can never bloom for me!”) was especially moving. Rather than expressing the terrible hurt suffered by the lover, ‘Ich hab en glühend Messer’ (I have a glowing knife in my breast) seemed to evoke outrage, while a delicate linear flow generated a soothing effect in the otherwise sorrowful ‘Die zwei blauen Augen von meinem Schatz’ (The two blue eyes of my darling).

Gerhaher’s reading of ten of the Wunderhorn songs was generally if moderately effective, particularly in passages that had a Schubertian quality, where Gerhaher’s straightforward musical approach was most welcome. Yet the military-themed songs seemed somewhat tame, even withdrawn, though sensitive and enhanced by the pure sonority of his high mezzo-voce, most ingratiating in ‘Wo die schönen Trompeten blasen’ (Where the beautiful trumpets blow). ‘Das irdische Leben’ (The Earthly Life), a narrative song about the death of a child from hunger after his or her pleas for sustenance are put off until it is too late, seemed to only moderately reflect the tragedy of the text.

In his interpretation of Kindertotenlieder (Songs on the Death of Children), one of the greatest song cycles after Schubert’s, Gerhaher appropriately maintained control over emotions that could well have overwhelmed the rather introverted character of the text. Again his exquisite soft high tones, both during the opening and closing of the initial song, simply took one’s breath away. But when the music should soar with rhapsodic passion, for example in ‘Nun seh’ ich wohl, warum so dunkle Flammen’ (Now I see well why such dark flames), it merely rose dispassionately. Gerhaher had a disconcerting tendency to clip short phrases during the third song, and he gave the fourth rather short shrift. Jerky thrusts did not aptly characterize the stormy music that opened the final song; so what should have sounded electrifying seemed rather tentative. Yet when suddenly the music calmed down and we heard a brief reference to one of Mahler’s Songs of Youth (‘Hans und Grete’), a spiritual aura seemed to take hold, immersed in Gerhaher’s heavenly rendition of the closing moments that generated a feeling of hope. The ensuing encore, an extraordinarily beautiful performance of the song ‘Urlicht’ (Primal Light) that became the fourth movement of Mahler’s Second Symphony, may well have been the highlight of the evening.