Christian Tetzlaff and Antje Weithaas’s recital mined the limited repertory for two violins. The selection was diverse. Although it lacked the obvious choice of the great Sonata of Prokofiev, it proved that this combo is a successful one, and where the piano was never missed. Jean-Marie Leclair’s six Sonatas for Two Violins without Bass, written in 1730, seem technically advanced for their time. Tetzlaff and Weithaas both played recent violins by Stefan-Peter Greiner (born 1966), and they were well matched in their expressive phrasing and warm tone that resonated with minimal vibrato. They played their equally weighted parts with extreme sensitivity.

Bartók’s forty-four Duos, written as study pieces, are much deeper than typical etudes. Teztlaff played first violin in the eight duos in the first half, and Weithaas led in the six after intermission. These violins function as equals. Teztlaff impressively created a huge sound in even the tiniest bow movements, and was as captivating in the softer sections as he was in the glorious fortissimos. The performers reveled in the playfulness of certain Duos and brought out the substance of the weightier ones. Some elicited giggles from the audience, particularly in the accents signifying bug-bites in the delightful ‘Mosquito Dance’. 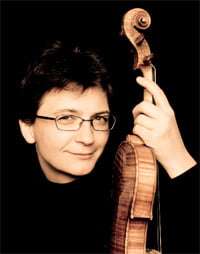 Duo Concertant (c.1840) by Belgian Charles-Auguste de Bériot (1802-70) was the concert’s weakest link. This virtuosic showpiece shamelessly exploits the first violin with a part laden with many frills and little substance. Weithaas took the lead role, and although she is a very competent violinist with a lovely sound, she came off as sounding quite ordinary in comparison to Tetzlaff, and she was unable to shape the piece into a work of interest. Tetzlaff, however, shone in the few passages where the second violin has the limelight.

He returned as leader in the Sonata by Eugène Ysaÿe. One cannot help but compare this 1915 work with the composer’s six unaccompanied Violin Sonatas written nine years later, a bed-rock in the violin repertory, in which Ysaÿe the esteemed performer finds his compositional voice. The lesser-known two-violin Sonata is patchier. It was written for the composer’s friend and pupil Queen Elisabeth of Belgium, although it is unclear if she managed to conquer the piece’s formidable technical challenges. The first movement’s four-note motif is an obvious nod to Beethoven’s Fifth, and it is in fact hard to hear the movement without being distracted by this comparison, to its detriment. Ysaÿe was adept at harmonic development, and his originality became apparent at the end of the movement, yet the beginning was derivative to the point of cliché. Interestingly, the same pattern was apparent in the two subsequent movements, which grew more intriguing towards their endings. Tetzlaff continued to be outstanding, with a brilliant tone and subtly nuanced phrasing. Neither performer ever let go of the suspenseful nature of the piece. The climaxes of the finale were perfectly paced, bringing the utmost of intensity to this dramatic work.

The evening’s main disadvantage was quite predictable: the prominent and extremely distracting noise from the subway that is close to the subterranean Zankel Hall. This is a huge problem for the otherwise lovely modern auditorium, to the point where one begins to dread the first appearance of a train.