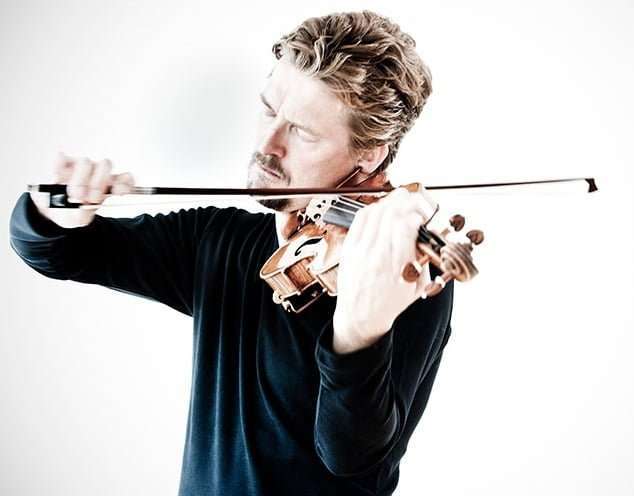 Johann Sebastian Bach’s Sonatas and Partitas (three of each) for violin constitute the core of the instrument’s repertory. It is rare to hear them played together in one marathon concert. Christian Tetzlaff was up to the formidable challenge: “These six pieces are a cycle … and they are interconnected in many ways”, something that becomes apparent from hearing them one after another and also through the progression of keys, from a dark G minor to a sparkling E major, to the diversity of technical styles, with the climax being the great ‘Chaconne’ of the D minor Partita, and culminating in the dance movements of the Partita in E, which get progressively shorter in length.

The cycle was written between 1703 and 1720, but was not published until 1802. Joseph Joachim is credited with initiating the first public performances later in the nineteenth century. Although Bach himself might have performed these secular works, there is no contemporary mention of them. Tetzlaff wrote, “As far as I can tell, these sonatas and partitas have no real reason for being … this is something Bach composed for himself.”

This was the opening night of the 92nd Street Y’s concert season. What should have been a momentous occasion was marred by noise: of the expected type – buzzing cell phones – and the unexpected – the bass vibrations of pop music coming from an overly loud gym in the basement of this community center. These disruptions were easily ignorable, but what was not forgivable was the loud roaring, apparently arising from the hall’s ventilation system, that emerged during the ‘Chaconne’, drowning out the violin in softer passages, and effectively destroying the evening’s emotional apex.

Tetzlaff approached the G minor Sonata with his signature clear tone and exquisite expression. He chose quick tempos throughout, yet the pace never felt rushed. His tone remained resonant in the multi-stopped passages of the ‘Fuga’. The dynamic range had little variation, reflecting Bach’s lack of such markings in the score, yet the phrasing made perfect sense. The finale had furious energy, and Tetzlaff took liberties in its timing, creating a sense of fluidity.

In the ‘Allemande’ of the B minor Partita, the tempo was brisk but more evenly regulated, emphasizing the work’s dance-like nature. Tetzlaff’s tone had a ringing quality, and the top line of the melody seemed as if it were a human voice conveying an urgent message. Each of this work’s movements has a variation to which Tetzlaff added elaborate ornamentation. These flourishes had an improvisational quality, and he imparted them with a natural ease that contrasted with the complexity of the notes. He took the ‘Courante’ at a lightning pace, and maintained a loud dynamic, yet still with a lightness of bow. The ‘double’ raced away so quickly that a few notes were lost, yet the virtuosity did not detract from the musicality. The ‘Sarabande’ was sustained and singing, calling up memories of a great interpreter of this music, the late Henryk Szeryng. The ‘double’ was restrained and wistful, while keeping the organ-like resonance. The ‘Tempo di Bourrée’ was steady and serious, with the quadruple-stopped sections initially played nearly simultaneously, and then arpeggiated in the repeat, keeping the movement flowing until the end.

Tetzlaff incorporated greater dynamic contrast and tonal difference in the ‘Grave’ of the A minor Sonata. The energy waned in the ‘Fuga’. Tetzlaff’s timbre was sweet in softer passages, but the louder sections began to sound forced in the multi-stops. The Andante was more successful, taken gracefully, with quiet poignancy, yet the Allegro was strained, with some uncharacteristic sloppiness.

After a long intermission, Tetzlaff was reinvigorated in the D minor Partita’s ‘Allemande’, his tone regaining its singing beauty. The ‘Sarabande’ was poignant in its haunting intensity, and he was luxuriant in timing. The phrases of the ‘Gigue’ felt too rushed for a dance, with some tonal harshness unfortunately returning. Then there was the tragedy of the ‘Chaconne’, with the ambient noise recurring, for what seemed like an excruciatingly long period of time. Tetzlaff soldiered through.

Having weathered that disaster, he was back in top form for the remainder of the recital. In the C major Sonata, his tone was consistently warm. His interpretation contained some surprises regarding accents, but the originality of the interpretation suited the piece. The Largo had an understated elegance, with each note imbued with meaning.

The E major Partita’s ‘Preludio’ was taken at breakneck speed, perhaps too slapdash as a few passages lost their clarity of articulation. He dived into the ‘Loure’ without a pause, the subtle beauty a breath of fresh air. The ‘Gavotte’ was indeed a dance, crisp and loud yet still playful. The ‘Minuets’ were overly fast, but still featured the brilliant color of his violin, a model of a Guarneri del Gesu made by Peter Greiner. A few murky notes emerged in the concluding ‘Gigue’, but were understandable given the evening’s test of endurance.