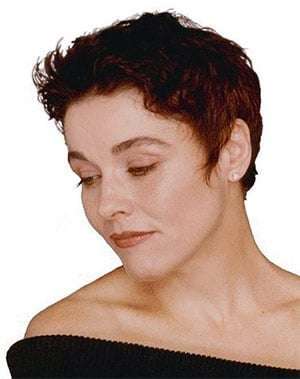 I first saw actress-singer Christine Andreas around thirty years ago. She was playing the young romantic lead in a triumphant revival of On Your Toes and giving vibrant interpretations of the Rodgers & Hart gems therein. As she points out during her cabaret act, there are not many tuneful musicals of that calibre being written today. She has been able to play in revivals such as My Fair Lady, portraying Eliza opposite Ian Richardson’s Higgins, and shows such as Oklahoma! and Pal Joey. She also headed the touring company of Adam Guettel’s Light in the Piazza.

Fortunately, we can still savour performers like Andreas through the thriving art of cabaret. Her opening number, ‘On a clear day you can see forever’, makes it evident that her way with a song is as persuasive as ever. “I promise that’s as noisy as I get”, she reassures after belting the final notes with bell-like clarity and which extends to her respectful handling of lyrics, notable when she confesses a love of verses such as in ‘My heart stood still’ and Bart Howard’s ‘Fly me to the moon’. There is also an innate jazz feel to her delivery, and she benefits from the backing of three splendid musicians. Of these, Martin Silvestri is Andreas’s husband and arranger, and a composer. A moving ballad, ‘Is this the way it feels?’, from a forthcoming musical of his, The Countess of Storyville, is a gem. She also sings two more Silvestri numbers, ‘Cover me‘ and ‘Love is good’.

Between songs, Andreas and Silvestri share a warm and witty repartee, and recount amusing stories about their careers, including the tale of an appearance at the White House (“for George the First”). Having been told to keep their act to exactly 42 minutes, they were unprepared when the President asked for a second encore, so fell back on a number that Andreas had performed countless times in the role of Eliza Doolittle, ‘I could have danced all night.’ Her spine-tingling version erases momentarily thoughts of Julie Andrews, and a medley of ‘I love Paris’ and ‘La vie en rose’ was equally powerful. At her most dramatic, Andreas is reminiscent of Edith Piaf, and the rapid, Brel-like waltz ‘Storybook’ (by Frank Wildhorn and Nan Knighton) becomes a showstopper when given Andreas’s scintillating treatment.

The couple makes capital out of two amusing duets, the familiar ‘I remember it well’ and the less well-known ‘Rhode Island is famous for you’, the latter’s witty word-play by Howard Dietz and infectious melody by Arthur Schwartz producing a highlight. Rodgers & Hart’s ‘To keep my love alive’ is neatly performed as a sprightly gavotte, though marred by some ill-advised mime, and Sammy Cahn and James Van Heusen’s ‘Teach me tonight’ becomes a sensual bossa nova. Other highlights in a rich programme include the driving ‘He loves me’ and ‘Send in the clowns’ – it is one of Andreas’s ambitions to play Desiree in A Little Night Music. Whether in a musical, or delighting us once more in cabaret, one hopes Christine Andreas will return soon.