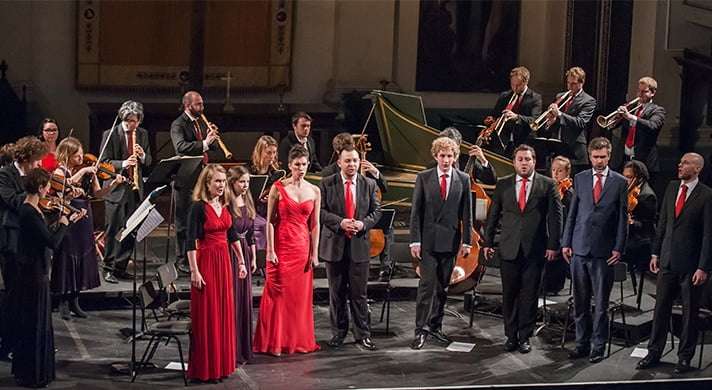 Performed completely from memory by a choir of ten with an orchestra of twenty, this Bach B-minor Mass was little short of revelatory. Solomon’s Knot is a collective whose aim is to communicate the full power of music as directly as possible – in this they succeeded brilliantly – and, although led by one of their artistic directors, Jonathan Sells, they also work without a conductor.

Otto Klemperer wrote that it “is the greatest and most unique music ever written”; however, dissatisfied with a performance he had given in Berlin in 1932, he did not attempt the work again until November 1967. One suspects that many people intuitively understand the greatness of the music but at the same time, as performed by large groups, it can seem a long listen with acres of Protestant counterpoint. By contrast with St Matthew Passion, whose chorales repay a large choral sound as they mark out the various stages along the way to the Cross, the B-minor Mass with its complex polyphony works best with small forces. ‘Dona nobis pacem’ is written out in the manuscript in a way which specifies doubling (soprano I & II, et al) so Sells took the opportunity of employing ripieno singers as a way of varying texture. This was highly effective, the singers ebbing and flowing to the edge of the stage as required and coming together for the choruses.

Without resorting to any overt dramatisation or personal glosses of the sort which disfigured Peter Sellars re-imagining of Matthew Passion, Solomon’s Knot really got to the fundamental message at the very heart of the Mass – to overwhelming effect. There was a real sense of sheer wonder and intensity to the singing of the ‘Incarnatus’, of mordant pain to the ‘Crucifixus’, it’s close a moment of magic, and an explosion of unfettered elation at the ‘Resurrexit’.

Being a collective there were no stars, the ten singers sharing solo honours, so it is almost invidious to single anyone but perhaps it is only fair inter alia to mention Kate Symonds-Joy in the final heart-stopping ‘Agnus dei’, Sells himself in the lilting ‘Et in spiritum sanctum’ and the imposing Alex Ashworth in the ‘Quoniam’ where he was accompanied by some quite extraordinary horn-playing from Kathryn Zevenbergen. There were notably fine contributions too from Leo Duarte and Robert de Bree (oboes d’amore), a sensitive flute contribution from Eva Caballero in the ‘Benedictus’ and some especially well-judged timpani contributions from Rosemary Toll.