This recital launched the 92nd Street Y’s 2019-2020 vocal series that will explore the influence of Beethoven’s An die ferne Geliebte – the first song cycle by a major composer – by juxtaposing it with cycles or collections by five others. The other common thread in the five vocal recitals is Julius Drake, who is the series’s curator, artistic director and piano accompanist. Schubert’s Schwanengesang was featured in this initial concert by tenor Christoph Prégardien, and the subsequent performances will pair the Beethoven cycle with vocal music of Brahms, Schumann, Wolf and Mahler. 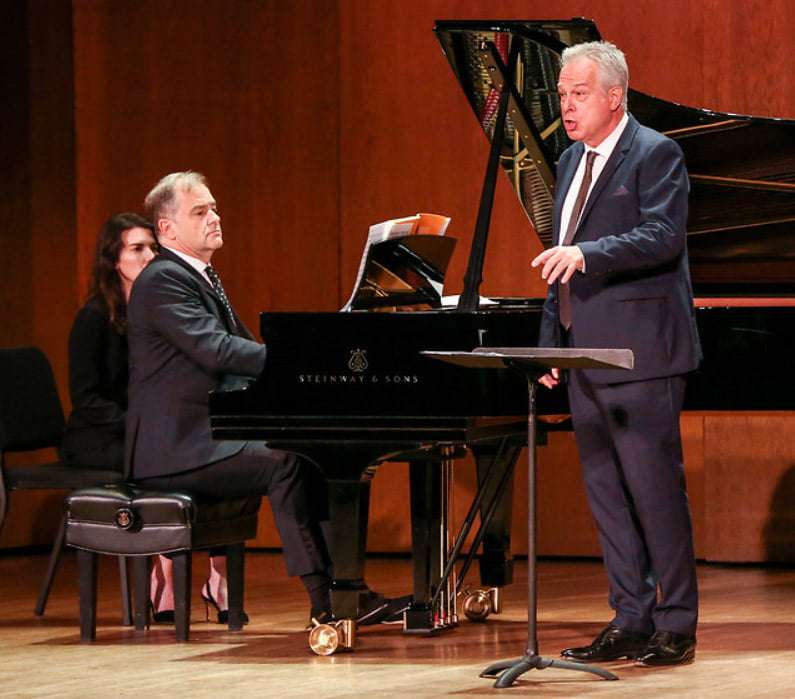 The performance was superb. Prégardien is one of today’s greatest Lieder singers, a consummate storyteller whose gestures and facial expressions aid in communicating the meaning and emotional content of the lyrics, and whose voice is fluidly expressive across its entire range, and especially beautiful on both top and bottom notes. Julius Drake is among the handful of the finest Lieder accompanists, his piano often virtually singing along as well as supporting the vocal line.

Schwanengesang is comprised of songs published posthumously under that title, but was not intended by Schubert to be performed as a song-cycle, like his earlier Die schöne Müllerin and Winterreise. It makes sense to perform Schwanengesang in two separate groups – the first setting seven poems by Ludwig Rellstab and the second six poems by Heinrich Heine (saving ‘Die Taubenpost’, the lone poem by Johann Gabriel Seidl, for a fitting encore). This treated the two groups as separate coherent cycles, each differing in musical style and emotional content from the other, as well as from Beethoven’s ‘ferne Geliebte’ cycle.

Alternating the music of the two composers, the program began with three Beethoven songs composed prior to the ‘ferne Geliebte’ cycle, each sung to a beloved. Adelaide, the earliest of the three, built dramatically, showing off the talents of both artists. The succeeding songs to texts by Goethe were less operatic, but sung with heartfelt emotion.

In the Schubert Rellstab songs that followed, Prégardien infused each stanza with appropriate feeling, his storytelling never boring or routine. The questions and answers of ‘Frühlingssehnsucht’ (Spring longing) and the merry ‘Abschied’ (Farewell) were particular standouts. The dominant theme of these songs is love, often expressed at a distance from the beloved, thus paralleling An die ferne Geliebte, which followed after intermission. Although it ushered in a new genre, nearly all of the cycles by later composers depart from the unified and continuous musical structure of Beethoven’s seminal work, which was elegantly managed by Drake. Alois Jeitteles’s depictions of the beauties of nature shone through in Prégardien’s singing, and the concluding ‘Nimm sie hin denn, diese Lieder’ (Accept these songs) was rendered with tender affection.

The best was yet to come, however, as Prégardien and Drake concluded the program with a gripping performance of the Heine songs, sung here in the order of their original publication by the poet rather than as published in Schwanengesang. This music is quite different from the more light-hearted and Romantic Rellstab songs. Heine’s poems speak of lost love and are infused with sadness, which Schubert aptly reflects in both voice and accompaniment. The artists had the audience on the edge of their seats, struck dumb into a chilling silence as Prégardien intoned the woeful texts, building to a climax in ‘Die Stadt’ (The Town) and ‘Der Doppelgänger (The Double), performing the latter so convincingly that one could almost believe he was experiencing the terror of his encounter with his double right before our eyes. This song no longer comes last in this re-ordering of the songs, but ‘Der Atlas’ (Atlas) did provide a fittingly powerful and dramatic conclusion to the program, capped off by the encore of ‘Die Taubenpost’, Schubert’s very last song.