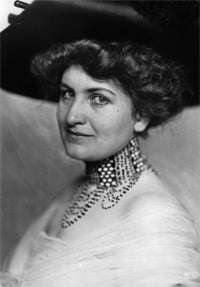 The compelling, flawed human-being that was Alma Mahler stands behind these two works. Wife of the composer, 19 years his junior, three months pregnant with their first child at the time of their marriage, adulteress, highly intelligent, discredited witness to the events of their time together, falsifier of documents and unreliable in memory, her combination of beauty, high cultural intelligence and exceptional musical gifts placed her at the heart of the “City of Dreams” that was Vienna in the years 1900-35, a period covered in this series of concerts by the Philharmonia Orchestra and its recently appointed Principal Conductor Esa-Pekka Salonen.

Mahler’s Sixth Symphony is dated June 1905; Alban Berg’s Violin Concerto was completed in August 1935. During those thirty years Mahler had died and his widow had married the architect Walter Gropius, giving birth to her third daughter, Manon, in 1916. The tragic death of Manon in April 1935 was the inspiration for Berg’s Violin Concerto, dedicating it ‘To the memory of an angel’; whether the music is a portrait of the girl, or a recollection of her “fairy-tale” character, is uncertain and ultimately irrelevant; the music stands or falls on its own account, and not through extra-musical association.

As a result of the growth and development of Mahler-scholarship over the years, we have learned to distrust many of Alma’s ‘recollections’, whether they are examples of sheer forgetfulness or deliberate obfuscation on her part. But as the great English judge Lord Denning once remarked: “A person may be a proven liar, but how can we be sure on this occasion that they are not telling the truth?”. It is not necessarily correct to discount entirely Alma’s claim that the second subject of the Sixth Symphony’s first movement is a portrait of her, for this great theme is intense and passionate, almost tactile in its sexuality – and it is in the right key, F major, which we know from other sources Mahler associated with Alma (such as the Adagietto of the Fifth Symphony and the song ‘Ich bin der Welt abhanden gekommen’, from “Rückert-Lieder”).

But it is thanks to Alma that we are still confronted with the most difficult conundrum surrounding the Sixth – the correct order of the middle movements, stemming from her four-word response to a query from the conductor Willem Mengelberg in 1919. The background and resolution to this matter can be read in a feature I wrote for The Classical Source (link below), and I do not propose to revisit it here, other than to say that Mahler never publicly conducted the Sixth with the middle movement order of Scherzo-Andante, nor did anyone else during his lifetime. The first public performance of the Scherzo-Andante order took place almost ten years after Mahler’s death, compounded by the 1961 Critical Edition of the work edited by Erwin Ratz, who is now known to have falsified evidence to support his belief that Mahler got it wrong. Ratz’s successor has condemned Ratz in print for his lies and tergiversation, to the point where we know beyond any doubt that the correct order for performing those middle movements in the Sixth Symphony is Andante-Scherzo.

There is, therefore, no justification whatsoever for Esa-Pekka Salonen’s wrong-headed decision to adhere to the demonstrably incorrect Scherzo-Andante order, a decision that reduced the work to a form which the composer would not have recognised – and this in a supposedly scholarly series of concerts and events! This was a great pity, the more so as no other conductor who has investigated the matter now follows Alma’s and Ratz’s misguided claims, for much of Salonen’s performance was admirable.

The basic tempos throughout were excellently judged, the first movement exposition repeat was observed, the third hammer-blow in the finale was correctly omitted and the orchestral playing was of a very high order, even if the string strength (founded on eight double basses, which may not be enough in the RFH) was on the light side. Only occasionally, and no doubt incurred by the unfortunate revamped Royal Festival Hall acoustics, did one feel that Salonen lingered a little too much over the slower sections of the first movement and take the successive parts of the Andante after the opening theme a shade too quickly for complete structural and expressive cohesion, but his command of the intensely difficult finale was wholly admirable, moving towards that astounding, deeply moving, coda with fine artistry.

Christian Tetzlaff had earlier given a magnificent account of Berg’s Violin Concerto – intensely lyrical at all times, indeed (if one does not appear to be too wise after the event) profoundly youthful in its characterisation – and Salonen and the Philharmonia Orchestra mostly provided excellent support, even if after the Bach chorale towards the close the orchestral balance with the soloist was not as subsequently withdrawn as it ought to have been. The Philharmonia was too loud – not overpowering as such, but not as expectantly, memoratively tender as would have made this a great performance.