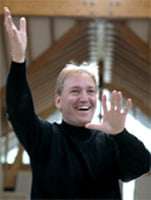 In the splendid setting of the Merchant Taylors’ Hall, Tenebrae explored two of the themes of this year’s City of London Festival – Goethe and Switzerland. The programme, first half secular and second half sacred, sandwiched an interval courtyard performance of traditional Swiss marches and waltzes from the Hottingen Guild Band of Zurich.

Tenebrae director Nigel Short then gave us Part One of his work in progress, “Rhenus Fluvius”, which on this evidence is set to become a substantial and keenly descriptive work. A cycle of texts from Jürg M. Fankhauser that follows the river Rhine from source, it begins in dramatic style before an extended section for narrator (not credited here) and suspended choir, the slowly shifting backdrop a key feature of the ‘Prologue’. With three languages already used in the four movements, and more planned, Short complements his varied source material with strongly voiced music, always in a tonal grip but harmonically interesting, particularly in this authoritative performance, giving a keen sense of the outdoors. 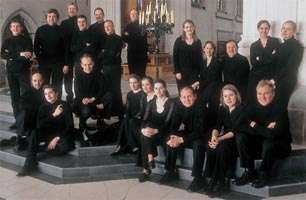 Though in the ‘secular’ first half, Goethe’s text for Schubert’s “Chor der Engel” is ‘sacred’ in all but function, though the joy implied in its praise was restrained here, Short bringing through anticipations of Bruckner to a lovely, effortless final cadence. Tenors and basses joined in a yearning “Nur wer die Sehnsucht kennt” and an unhurried “Gesang der Geister über den Wassern”, its descriptions of towering cliffs and gushing streams “softly hissing down to the deep” were vividly portrayed by the ten voices in a powerful yet controlled performance.

Centrepiece of the second half was (Swiss composer) Frank Martin’s “Mass for Double Choir”, though with only the ‘Kyrie’ and ‘Gloria’ printed in the programme applause rang out after the latter’s conclusion. To be fair the performance invited it, as the ‘Gloria’ was the epitome of joy itself, Short continually revealing the intricacies of texture and harmony that make this setting so satisfying. A carefully chosen quartet grouping brought through the moving melodies of the ‘Agnus dei’, while the sonorous low Ds of the basses in the ‘Domine Deus’ were beautifully achieved. Early climax points in the ‘Kyrie’ were perhaps a little snatched, though the unusual dimensions of the room – a high ceiling and relatively short length – were less kind to the high notes.

Martin’s work was prefaced by the autumnal warmth of Brahms’s Opus 110 motets, with the conventional hymn-like contours of ‘Ach, arme Welt’ contrasting with the intertwining parts of ‘Wenn wir in hochsten’. Schubert’s setting of the twenty-third psalm followed, with the harp-like sonorities of Jeremy Filsell’s piano part complementing the sopranos and altos in a setting that was serene from beginning to end.

Serene, too, was Brahms’s “Geistliches Lied”, acting as an ideal postlude to the Martin. Beautifully shaped, and with the long notes held particularly well by the men’s voices, the final crescendo and diminuendo were worth the admission alone.