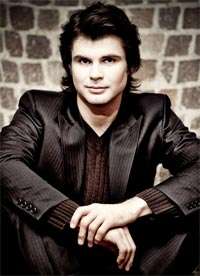 The main attractions of this concert were a rare outing for Franz Schreker’s Chamber Symphony and the opportunity to hear Serhiy Salov, possibly for the first time in London.

Mozart’s ‘Haffner’ Symphony was given a perfectly respectable performance. Even so, the first movement was rather effete and lacking sparkle from winds and trumpets. Andreas Delfs seemed to favour a water-colour approach, leading to blandness; unaffected certainly, flowing, if pressured in the finale (pretty decent timpani interjections though), yet such a uniform approach suggested the ‘Haffner’ as less of a masterpiece than it undoubtedly is.

Franz Schreker (1878-1934) completed Chamber Symphony in 1916. Music that wouldn’t frighten even the most timid of horses, if it was played more often – and if people made the effort to come and hear it – Schreker’s Chamber Symphony would enjoy a much higher profile than it does, a 25-minute continuous piece scored for a slimmed-down classical orchestra enlivened by a soupcon of percussion with piano, harp, celesta and harmonium. In this generally finely judged and sympathetic account only the mild and wheezy voice of the harmonium failed to make it through – a consequence of its backward placement on the stage; otherwise Delfs had a lucid view of the whole conveying well the symphony’s dreamy and suggestive opening, and the fantastical atmosphere, with the more animated sections, not least the dance-like scherzo, emerging organically and with delectable point, the music then turning-in on itself to explore further the slower material – touching and rapturous. The work seems to end, however calmly, with a question mark, an enigmatic dissolve – given the date of composition this should come as no surprise. Stylistically, the music might be described as distilled Richard Strauss; and although Webern resisted from including it in his official catalogue, Schreker surely knew his Im Sommerwind (for large orchestra). Well done to the City of London Sinfonia for programming Schreker’s Chamber Symphony and for making a real treat out of it.

On paper, another performance of the ‘Emperor’ Piano Concerto was less enticing – like many of the classics, it comes round too often – yet Serhiy Salov (from the Ukraine and now seemingly Canada-based) brought freshness and distinction to it, and formed a notable collaboration with Delfs and the CLS. Poised and poetic, with plenty of unforced momentum, Salov impressed both with his demonstration and his ability to accompany; furthermore his flexibility added thoughtful reflection to the first movement. The Adagio was ideally spacious and if even quieter dynamics would not have gone amiss, the music was stilled bathed in moonlight, Salov’s notes limpid and sensitively touched, the music warmly unfolded. If the finale was less successful – a little gabbled as well as squeezed and aggressive in the piano’s treble – this was an account that blew away cobwebs and the contempt of familiarity.

Salov made a positive impression, a pianist to hear again, a wish delivered quicker than expected with an encore, one of Brahms’s numerous miniatures – the Intermezzo in A (I believe), the second piece of the Opus 118 collection – to which Salov brought a hauntingly susceptible response to some of Brahms’s most private thoughts captured in music, and also found deeper tones from the Steinway. This resonating ‘extra’ was altogether special from Salov who is just about to release a CD on Analekta entitled “The Sacred Spring of Slavs”, which includes the pianist’s transcription of The Rite of Spring.