Both of these works address the theme of farewell. Jörg Widmann’s Trauermarsch, a piano concerto in all but the title, was inspired by the ‘funeral march’ that opens Mahler’s Fifth Symphony and was written for Yefim Bronfman. 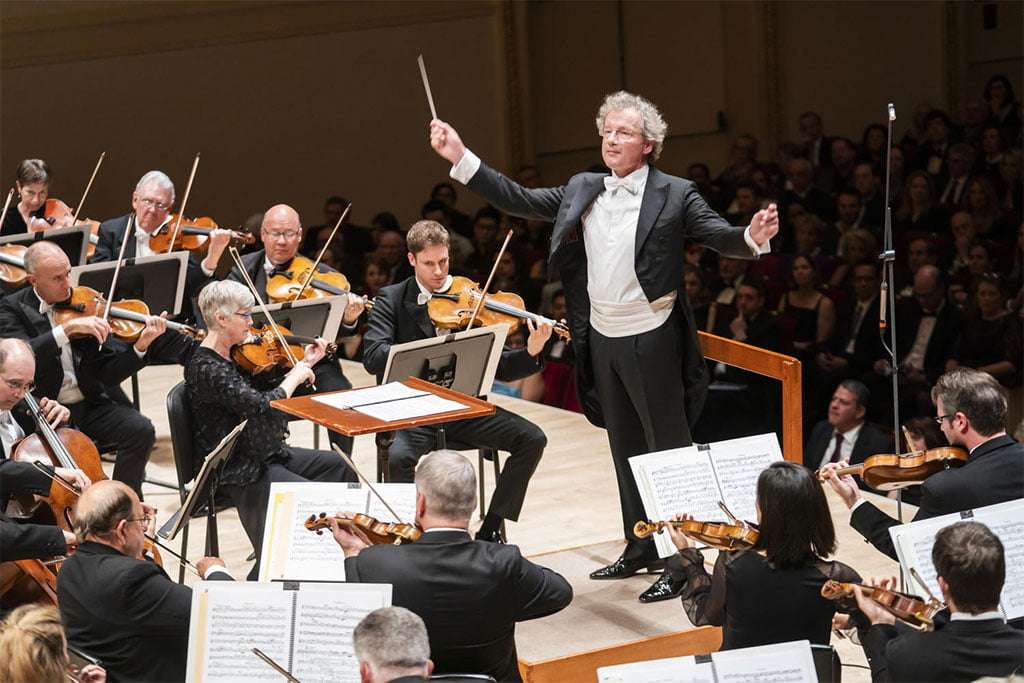 Widmann had originally intended to compose a four-movement work with only a brief introductory march, but “got more and more obsessed” with the march itself. The result is a single-movement piece, based on elements found in the funeral marches of Handel, Chopin and Mahler.

The opening, a two-note drooping phrase which becomes a basic element, is first played softly on the piano and is soon accompanied by rumbling low strings. The music then evolves into a solemn-paced march. The soloist plays non-stop throughout the twenty-five minutes, the piano often incorporated into the orchestra that sports a huge and highly varied percussion section. Tempos, densities and textures constantly alternate to create an existentially-edgy soundworld. At one point, the pianist, rapidly repeating rhythms at the top of the keyboard, is abruptly cut off by snarling horns. At another moment he is allowed to continue while trumpets and trombones exchange tense fanfares. Much of the piano-writing is chime-like, and when accompanied by percussion produces some particularly mysterious effects. Near the end a brief sweetly-melodic passage quickly leads into a wildly turbulent section, and then the music slowly fades away and returns to the opening.

Trauermarsch offers a great deal for listeners and performers to appreciate, and Franz Welser-Möst was kept amply busy throughout. He did a formidable job of coordinating the many disparate elements in the intricate and challenging score, and the orchestra responded brilliantly, while Bronfman delivered a tour de force.

The Cleveland musicians were at their most virtuosic and monumental in a resplendent account of Mahler’s Fifth. Welser-Möst treated the five-movement Symphony (in three parts) as a whole, unifying and bringing enormous clarity to a work that is so much about disunity and conflict. All the way through he built each movement with total concentration, allowing us to hear every aspect in equal measure.

The opening ‘Trauermarsch’ was taken at a leisurely – but not overly-slow – pace, and came across as more lyrical than usual. Following the shortest of pauses came the second movement, in which Welser-Möst most effectively drew thematic connections to the first, with the slow and delicate cello music sounding particularly gorgeous and affecting.

For the Scherzo, principal horn Nathaniel Silberschlag performed while standing at the front of the orchestra. While his playing was impresssive, and the overall feeling of the movement was wonderfully bucolic, his constant twirling of his instrument, fiddling with his shirt cuffs, and stooping and sipping from his water bottle created an annoying distraction which could only be overcome by closing one’s eyes.

The strings-and-harp Adagietto was rapt and warmly-affecting, at an ideally flowing tempo, and the Rondo-Finale was refined and exhilarating, with tremendous explosive energy at the close; spectacular.