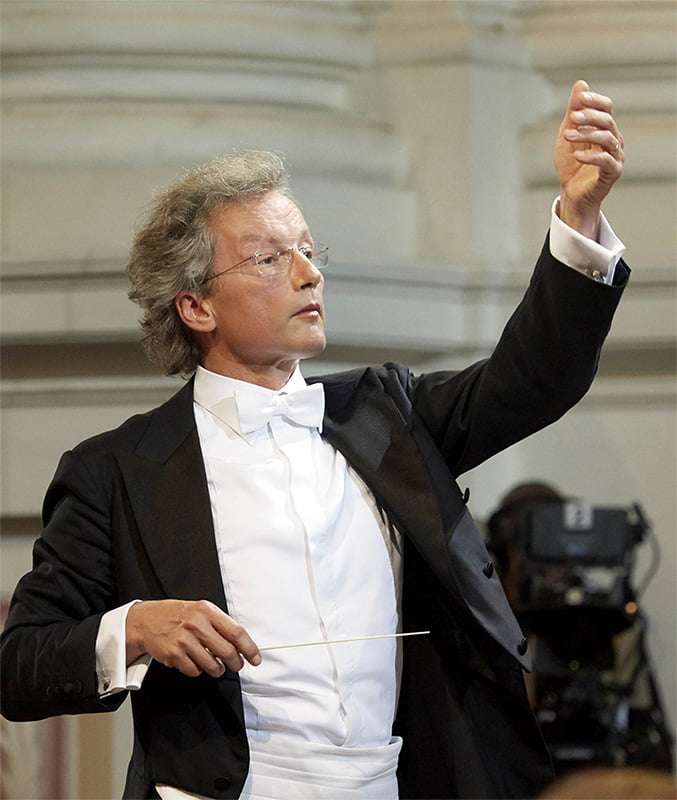 This first of two Carnegie Hall concerts celebrating the Cleveland Orchestra’s centennial paired music based upon a bizarre tale of horror with the vision of Mahler’s Ninth Symphony, Franz Welser-Möst conducting.

Johannes Maria Staud’s fifteen-minute Stromab (Downstream) was inspired by Algernon Blackwood’s The Willows, which tells of two young people who travel down the Danube in a canoe and end up stranded in the marshes of an island, far from civilization. According to the composer “they become enveloped in a strange web of impending doom … ultimately reaching nearly cosmic dimensions – and accompanied throughout by a mysteriously circling, elusive sound that hovers over the scenery.” It is not surprising that after studying with Brian Ferneyhough and Michael Jarrell, Staud (born Innsbruck in 1974) has a penchant for creating new sounds that might shock but usually delight, illuminating emotions rather than describing a narrative, creating something mysterious and sinister, with a palette that includes a musette (a baroque bagpipe), a basset horn, and a saxophone quartet.

A soft, glistening haze is heard, giving way to a threatening tuba solo (played impressively by Yasuhito Sugiyama). Sustained tones generate dissonant chords, punctuated by darting intrusions from woodwinds which give an increasingly foreboding quality. As the orchestra grows, the music becomes a terrifying monster, seeking to grasp its prey. When the music subsides it becomes more murky and cavernous, generating a chilling atmosphere. Then the terror resumes, darting viciously, as if on the heels of the protagonists. The work concludes with a weird clarinet solo (played brilliantly by Afendi Yusuf) that abruptly stops. This was a stirring performance.

Welser-Möst is not well-known for conducting Mahler, but his program note and this account of it reveal some definite ideas about the Ninth. He places stress on its harsh, confrontational aspects. Consequently, in the first movement, references to bygone days were presented in a rather uninvolved, objective manner. The repetition of the ‘farewell’ motif (a falling major second), the tender-hearted first subject, and the subdued version of a tune from Johann Strauss II’s Waltz, Freut euch des Lebens (Enjoy Life), all warrant a personal approach rather than recitation. Welser-Möst’s reading lacked the sensitive expressivity that characterizes Viennese charm and pervades the first group of themes; instead, his detached rendering was cold and sterile. The harsh second theme provided little contrast, treated rather smoothly. Quicker tempos raced as if trying to escape destiny: but speed was insufficient to engender dramatic intensity. Welser-Möst feels that Mahler was so burdened by the fear of death (represented by the arrhythmic motif that is reprised fff at its climax) that it tainted his idyllic memories. The most successful moments were the intervening passages that work their way from one subject to another, particularly the one marked Schattenhaft, which brought to mind the opening of Stromab.

A straightforward approach to the second movement played up the contrast between the Ländler and waltz, the former lacking lilt and charm, the latter increasingly antagonistic. The ‘Rondo-Burleske’ was on fire from the off. Fierce, intense and driven, it was devastating in its ferocity and defiant brutality, so rapid that it was remarkable that the Clevelanders were able to negotiate the increasing tempos that brought the movement to a frenetic close.

Welser-Möst considers the structure of the Finale to be akin to theme-and-variations. Consequently, the elements of sonata-form were downplayed, played straight as an arrow and sometimes sounding dry and static. Strong accentuation of the sixteenth-note turn figures gave the main idea a demonstrative character, while plaintiveness generated a somber aura during interludes. Following a strong climax during which the motif that opens the Symphony is re-stated forcefully, the reprise of the Finale’s beginning hurried despite Mahler’s direction that it be played molto adagio (even broader than before). In the final page, Mahler utters his last nostalgic reference, quoting from the fourth song of Kindertotenlieder (not the third as misstated in the program) and shows conclusively that Mahler was not expressing resignation to fate but imagining something more beautiful than the World he would soon leave. Given the negative character of much of Welser-Möst’s reading, it is no wonder that such a sublime conclusion had little connection with the rest of the Symphony.