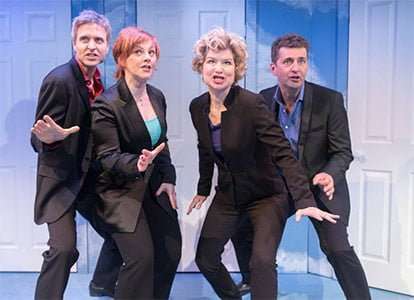 Closer Than Ever is a collection of songs by David Shire and Richard Maltby that reflect various aspects of life and behaviour. It started as a portfolio by Maltby (with Steven Scott-Smith) entitled Urban File, consisting of ideas for numbers primarily based on the experiences of his friends and later became an evening’s entertainment, which took time because of other commitments – Shire was writing music for movies such as Norma Rae (for which he won an Oscar), The Conversation and Saturday Night Fever, plus opera, theatre and television. With Maltby he won Tony Award nominations for two musicals – Big and Baby – and Maltby had earlier triumphed for Ain’t Misbehavin’ and then Fosse, and they were lauded for the English lyrics for Miss Saigon and had an off-Broadway hit with another revue: Starting Here, Starting Now.

Closer Than Ever is making a welcome return to London in what could be called the definitive version, for it is directed by Maltby and features four accomplished players plus the expert musicianship of bassist A. J. Brinkman and pianist Nathan Martin. Most of the songs were written in the 1980s and Maltby acknowledges that this was before e-mail, texting, Facebook and Twitter. But the problems of relationships and attitudes remain, and the songs are just as valid. Sondheim’s Company was written even earlier but holds up superbly. Though one might try to avoid mentioning Sondheim, it is inevitable, for he specialises in the same field; numbers such as ‘The little things you do together’ and ‘Sorry-Grateful’ would fit seamlessly into Closer Than Ever for which Maltby and Shire have written nearly 30 songs. The talented cast relish giving them dramatic or comic life. 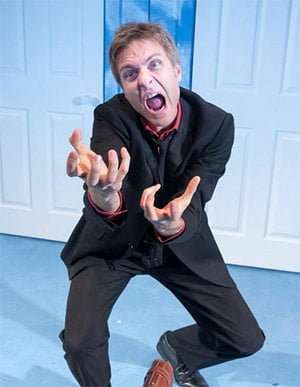 Graham Bickley was in the original cast of Miss Saigon and played Joe to both Petula Clark and Rita Moreno in Sunset Boulevard. Sophie-Louise Dann sparkled in Ivor Novello’s Gay’s the Word, and her credits include Dot in Sunday in the Park with George. Arvid Larsen starred in Jesus Christ Superstar and (also) Sunset Boulevard, and gave a compelling portrayal of Marius in the revival by Forgotten Musicals of Fanny. Issy van Randwyck, for many years part of Fascinating Aida, played Bianca in the Regent’s Park revival of Kiss Me, Kate.

The company is introduced to us with the rousing ‘Doors’, which gives Kurt Stamm’s choreography some playful levity as the cast debate which direction their lives should take, the set consisting of brightly coloured egresses. Van Randwyck is amusing while being sadly deflated when Larsen tells her he wants to be her friend; she has plenty of those and was hoping for something more. Dann is spellbinding in ‘Life Story’ as a woman who, after her husband left her, became a writer on feminism and put her son through college. In ‘One of the good guys’, Bickley reflects that being a good husband is enough, if with something missing, and in ‘If I sing’ Larsen is touching as a man whose musician father is dying. ‘Three friends’ (excluding Bickley) are chums energetically seeking success on Broadway, but forgetting their friendship when fame beckons (shades of Merry We Roll Along), and in ‘Fandango’, Dann and Bickley are career-parents each hoping the other will take care of their baby.

Lighter moments include Van Randwyck’s ‘Miss Byrd’ in which she reveals the secret life of an estate agent, and in ‘The bear, the tiger, the hamster and the mole’ (a number cut from Baby), Dann reveals that the female simply ignores their spouses or treat them with contempt. Van Randwyck shows anything but contempt for the hunky Brinkman in the sensual ‘Back on bass’ and the quartet revels in the lively ‘Dating again’, one of the catchier melodies. Not all of them linger in the mind but all are pithy and enjoyable – and you’ll not find a better cast to perform them.