[Premiere details given in text] 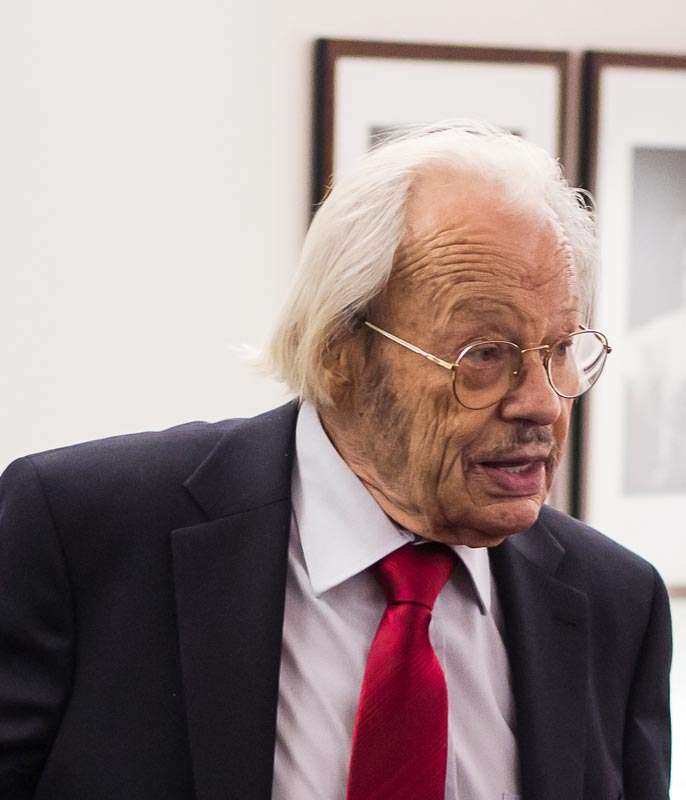 Those who are at all familiar with Friedrich Cerha, who celebrates his 90th-birthday next year, on February 17, are likely to have encountered it through his completion of the third Act of Alban Berg’s Lulu, or through the various publications of ‘early music’ he has edited, or through his conducting of new-music ensemble Die Reihe.

Fewer are likely to have encountered Cerha through his music, though his output is now in excess of 100 works – including three full-length operas and many orchestral works, including the seven-part cycle Spiegel as conceived in the late-1950s and which remains the most important example of texture music from that heady era. Such an opus was outside the scope of Wigmore Hall’s Composer Focus Day (Cerha in attendance), which nonetheless encompassed a more than representative cross-section of his chamber and instrumental output.

The late-morning recital featured members of Ensemble Modern in a sequence of works from the past decade. Whether or not Music for trombone and string quartet (2005) invents a new medium, it certainly sets a formidable precedent for the combining of two such disparate sound sources. Thus a haunting Adagio and darkly inward Intermezzo frame an incisive Scherzo whose Trio features what one can only call trombone ‘pizzicato’, which are in their turn framed by an agile ‘Energico’ then a lively and unpredictable ‘Finale’.

Very different in its intent, Gedankensplitter (Thought Splinters – 2013) is a series of ten “musical moments” for solo oboe – the eight here (all world premieres) making an eventful follow-through; no doubt other combinations are possible. After this came the UK premiere of Phantasy for clarinet and piano (2012) which offers a new take on a favoured Romantic duo, the salient motifs engaging in a process of continual variation whose faster sections are flanked by those that explore the more speculative and even fatalistic sides of the medium. 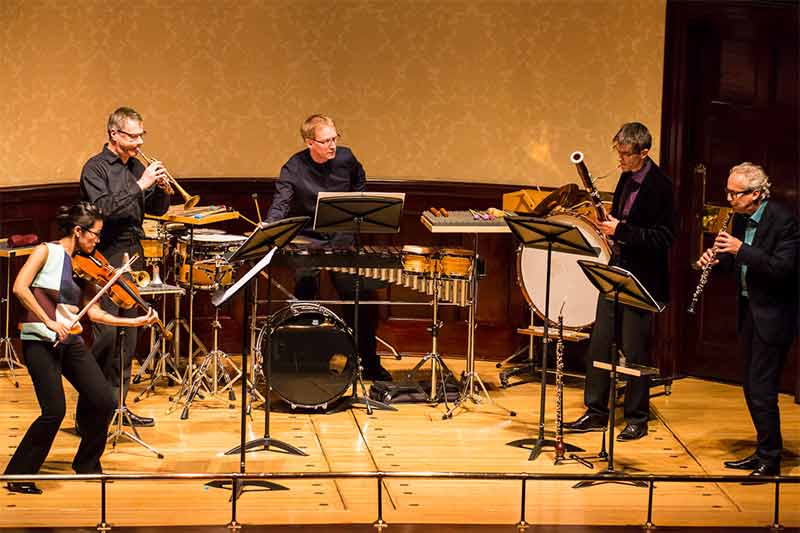 The notion of brevity is again to the fore in Nine Bagatelles for string trio (2008). ‘Moment’ form has been an aspect of Cerha’s thinking at least since his editing of Webern’s aphoristic orchestral pieces four decades ago, and the present set draws on a wide range of technical and expressive possibilities – with due recourse to the numerous duos within this ensemble – as it emerges towards a (surprisingly?) cohesive sequence. Has any other composer, other than Kurtág, taken such a distinctive practice and drawn from it music so personal and idiomatic?

The afternoon recital featured the Boulanger Trio, whose account of Five Movements (2008) for piano trio was an undoubted highlight. Cerha has written about having avoided this most exacting of media until late in his career, but the wait proved worthwhile. Again, two slow movements – a ruminative ‘Malinconia enigmatica’ and ‘Elegia’ of disembodied timbres and harmonies – frame an elusive ‘Scherzo spettrale’; the trenchantly argued opening ‘Parabola’ duly balanced by the hectic contrapuntal activity of ‘Stretto’ which sees this work through to its abrasive close. There followed the world premiere of Three Pieces for cello and piano (2013), an intriguing take on the fast-slow-fast format where the duo’s meaningful recourse to extended techniques enhances the stark expressive contrasts and often sardonic humour. Andreas Schablas then joined them in Five Pieces for clarinet, cello and piano (2000) – this time pushing the ‘unity in diversity’ principle to its relative limits, while also underlining the motivic precision and textural focus such as ensure cohesion over Cerha’s music as a whole.

The evening recital by Ensemble Modern ranged widely over Cerha’s output chronologically, if not aesthetically. Among his earliest acknowledged works, Konzertante Tafelmusik (1948) is a nod to the brief post-war eminence of Stravinsky and Hindemith – its three movements have the formal rigour of a chamber concerto (scored for oboe, clarinet, bassoon and trumpet) and expressive informality of the ‘Concert table music’ outlined by the title. Those coming to Cerha through this and Piccola commedia (2014) may have been taken by his seeming stylistic consistency over almost seven decades – this ‘shirtsleeves’ music (sans clarinet but with viola and percussion) falling into five ‘acts’ and an intermezzo whose oases of calm are outweighed by the sheer boisterousness elsewhere: not least in the virtuosic and raucous final ‘Potpourri’. 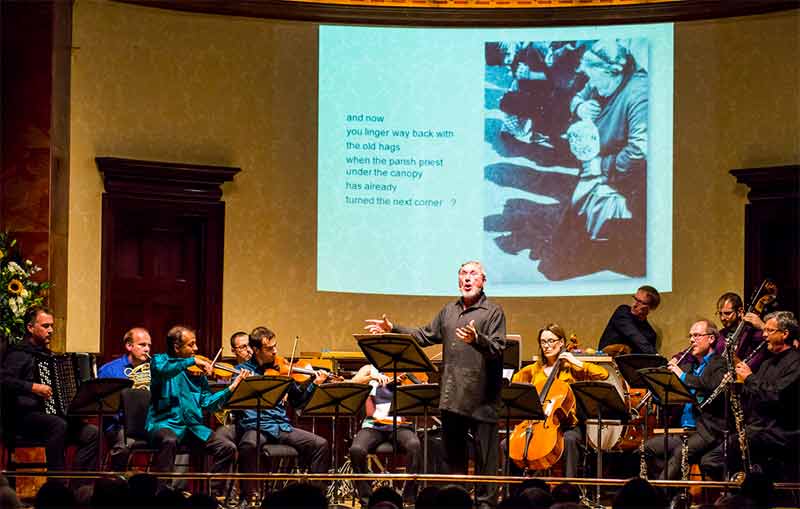 The culmination of this day came after the interval with 1. Keintate (1982), one of Cerha’s largest attempts to harness the popular music of bygone Vienna into a fusion of cantata and cabaret – hence the presence of ‘chansonnier’ HK Gruber to relate the 45 individual verses by Ernst Kein (thus the pun in the title) which relate the foibles – via an attitude ranging from affection to disdain – of the Viennese psyche.

Numerous well-known melodies are encountered during its 50-minute course, their deployment by no means always ironic in intent, while the scoring – for pairs of clarinets and horns, string quintet, percussion and accordion – amply evokes an archetypal Vienna stretching from Mozart to the mid-twentieth century. Projection of Franz Hubmann’s photographs of the Viennese milieu (including a figure who bore a disconcerting resemblance to Oliver Hardy) further opened-out the frequently barbed sentiments, while the choreographed recitation by the inimitable Gruber provided a focal-point from which to enjoy the deadpan wit of Kein’s texts and the bracingly sardonic humour of Cerha’s music.

Clearly there is more to that music than could possibly be covered over the course of just one day, yet all those present (which sadly included very few composers of whichever generation – has British music really become so insular again?) evidently appreciated what was on offer. Hopefully next year will see further markings of Cerha’s 90th: what better than were the BBC Symphony Orchestra to give the UK premiere of the Spiegel cycle at Maida Vale? Unlikely, and yet warranted by the historical significance and intrinsic quality of Cerha’s music as a whole.