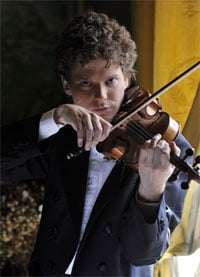 Lisa Batiashvili was ill and replaced by Corey Cerovsek, just as he had done three days previously when Harrison Birtwistle’s Trio was first-performed, in Celle, Germany. Cerovsek impressed by belonging totally, at-one with Adrian Brendel (Alfred’s son) and Till Fellner’s intimacy and unforced projection; all three players are natural chamber-musicians, individual and interactive, remaining distinctive in their unanimous cause, Cerovsek on his new-found colleagues’ wavelength, all three enjoying the elegance and caprice of the Haydn.

They made a strong case for the ‘Archduke’, usually referred to as Beethoven’s greatest piano trio – well, not when one considers the Opus 70 pair of such works, the second of which is the ‘Ghost’. Nevertheless, Cerovsek, Brendel and Fellner did it proud – imperious, spacious, searching, ebullient and with lovely tone and meaningful conversation, Fellner a model of discriminating pianism, full of character but never dominating his string-playing mates who shone brightly yet never stretched beyond a drawing-room setting, yet carrying effortlessly to every nook and cranny of the 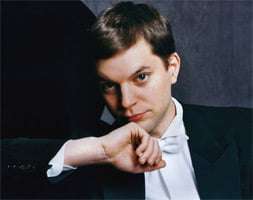 Wigmore Hall. Spiritual tranquillity was achieved in the slow movement, just as an earthy point and delightful lilt had been present in the preceding scherzo, given its full size of ABABA (most groups cut it to ABA by choosing to ignore Beethoven’s specific request to re-visit B and A for a second and third time respectively).

Aside from a string quartet, and a set of pieces for cello and piano, Harrison Birtwistle hasn’t written too much ‘traditional’ chamber music, nor does he often give formal titles (although his recent Violin Concerto breaks this mould significantly). So, we have Trio (not even Piano Trio), a 16-minute, one-movement work that opens with a Baroque flourish and, overall, might be heard as being in constant evolution and state of flux. It’s an explorative and tense work, concise, volatile, and not without passion and expressive asides, with some mechanisms for the piano that would be significant evidence as to the identity of the composer. This is music to return to, for one wants to get more inside its course and consequence; although, after a powerful sense of arriving, one clue as to what the music may be ‘about’, and which seems to be seeking some sort of rest at the conclusion, however uneasy, is the printed quotation at the end of the score taken from Verlaine: “Les sanglots longs des violins de l’automne” (The long sobs of autumn violins). This first UK performance seemed excellent, the composer looked delighted, and he was afforded a warm reception by the large Wigmore Hall audience.