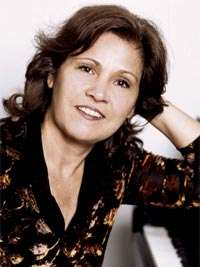 Cristina Ortiz writes that Debussy and Villa-Lobos are composers very close to her soul. The latter studied in Paris in his youth, as did Ortiz, who, after studying with Rudolf Serkin, went on to win Gold at the 1966 Van Cliburn International Piano Competition.Ortiz approaches Debussy with a late-Romantic temperament, choosing to indulge rich melodies, satisfyingly free of rubato. Hints at the baroque throughout Suite bergamasque were faithfully observed, but never blatantly laboured or precious. ‘Prelude’ was grand, but in a modest, dignified way, and ‘Clair de Lune’ was wistful. In Estampes (which takes its name from the process of copper- and wood-plate printing), Ortiz gave a wonderfully detailed pressing of ‘Pagodes’ and showed an individual voice throughout the luxurious ‘Soiree dans Grenade’. If L’isle joyeuse lacked a bit of that virtuosic fervour needed to portray a sense of emphatic joy, it was nonetheless shaped well, and Oritz showed considerable command of the technical challenges.Villa-Lobos is a towering figure in Brazil, which Ortiz evidenced in her honest reading of Chôros No.5 (Alma Brasileira). The title seems more apt for the melancholy Valsa da dor (Waltz of sorrow), throughout which Ortiz seemed at home with those characteristically South American lamentations. The highlight of the recital was the colourful A prole do bebê (The Baby’s Family), in which there was real child-like innocence spiced with some contemplative melancholy and amusing drunken gaiety. Those hoping for a bolt of lightening in ‘O Polichinello’ (Punch) may have been disappointed, but it was nonetheless articulated brilliantly. The toe-tapping rhythms of the final piece, ‘Jungle Festival from Ciclo Brasileiro’, were metronomically observed. Three encores were given, a Brahms Intermezzo (from Opus 118), Vianna’s Corta-Jaca, and, in dedication to the late Alicia de Larrocha, Granados’s ‘Maiden and the Nightingale’ from Goyescas.