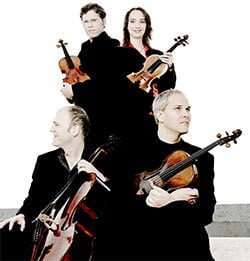 Following the initial two instalments of this series last October, Cuarteto Casals continued its cycle of the string quartets by Schubert with two more recitals – though on this occasion each of the programmes was divided between the works of the composer’s precocious adolescence and the three masterpieces which crown his contribution to the genre.

The first evening began with the String Quartet in D (1811/12), second of Schubert’s surviving works for the genre (two written after D18 having vanished near of the end of the nineteenth-century). Less wayward than its predecessor, it also focuses on the essentials of quartet-writing – thus the clear-cut contrasts between solo and ensemble in the buoyant initial Allegro, whose distinct themes prove highly effective in development, or the subtleties of phrasing in the amiable Andante; yet while the Minuet gamely anticipates the irregular dance-measures of those in the earlier symphonies, the truncated final Presto is simply too compressed for its range of key and textural changes to make their mark.

By the time of the String Quartet in B flat (1813), Schubert had advanced considerably in his mastery – making it more regrettable that only the outer movements remain (an Andante and Minuet survive from this year yet their keys rule out their inclusion, unless the composer had resorted to the ‘mixed keys’ of his earliest quartets). These Allegros complement each other in any case: the ‘first movement’ harnessing its often elaborate textures to a forward momentum with forceful canonic writing in the development and an imposing coda, while the ‘finale’ is a compendium of the abrupt contrasts in key, phrasing and dynamics that Schubert had by then absorbed – Haydnesque in conception if not always in execution.

The Casals musicians evinced real enjoyment of these engaging early pieces, though the String Quartet in D minor (1824) underlined just how astonishing had been Schubert’s progress over little more than a decade. Arguably overplayed nowadays in the context of quartets from the period, it is still a work of formidable individuality – not least when one remembers that the first of Beethoven’s ‘late’ quartets had yet to appear. The Casals players brought a purposefully cumulative approach to its initial Allegro, never overplaying the respective energy and lyricism of its contrasting themes such that they were intensified in the reprise and then capped by the coda’s fateful resignation. Without trying to draw its components into a formally or an expressively seamless whole, the five variations on the ‘Death and the Maiden’ song that comprise the Andante were pertinently characterised: the first three accruing a charged emotion that was pacified by the soulful fourth, then imbued with a deepening pathos in the fifth. The scherzo had a truculence the greater for its rhythmic acerbity, with the trio’s insinuating elegance given the right amount of breathing space; while the final Presto, though less of a remorseless perpetuum mobile than often rendered, found an enviable balance between its pervasive tarantella and resolute secondary theme – their climactic interplay rounding off the work with a surging decisiveness that was powerfully projected here.

The second evening began with the String Quartet in B flat (1812-13), which is the last of what one might call Schubert’s ‘early-early’ quartets. Its interplay of Mozartean poise and Haydnesque agility is most evident in the opening Allegro, for all that the climax of the development has a vehemence at which even Beethoven might have baulked. Both the Andante, whose insinuating main theme is subject to unexpected tonal shifts, and the robust Minuet – in which the deft interplay (sans cello) of its trio provides ample contrast – is more modest in intent; then the concluding Allegretto evinces an ‘orchestral’ manner of projection, notably in its clamorous coda, that was soon to find a more appropriate context in the symphonies.

Written a matter of months later, the String Quartet in D (1813) is a notable advance in almost every respect. Certainly the opening Allegro is beholden to its ‘ma non troppo’ marking: the quietly simmering initial bars, with their piquant melodic exchanges over a serene pedal point, are as arresting as any in the literature and build gradually via a transformed reprise to a powerful yet contained coda. The Andante has elegance and poise equal to any such movement Schubert penned at this time, with the Minuet notable less for its incisive main sections than its suave Ländler-like trio. If the final Allegro feels less arresting, its capricious main theme throws up many formal and expressive japes on the way to a decisive coda.

As with the previous evening, the second half made explicit the vast gulf that Schubert travelled over the next decade. A complete and intentional contrast to its successor, the String Quartet in A minor (1824) is nowadays the less often heard, yet it gained a measure of acceptance in the composer’s lifetime which might seem surprising given its overt introspection and the fact its four movements contain very little music in a faster tempo. The Casals members captured to perfection the yearning intensity of an opening Allegro whose ‘ma non troppo’ marking helps to reinforce the inexorability of the ostinato motifs underlying the plangent main theme – thus making possible an exposition (and reprise) in continual transformation as are thrown into relief by the tensile development and anguished coda. The Andante draws upon the rapt theme of an ‘Entr’acte’ from the incidental music to Rosamunde, though not in a series of variations but a leisurely rondo that finds its ideal complement in the ensuing Allegretto – not so much a minuet as an intermezzo whose function within the genre was to endure for almost a century, and whose bittersweet trio is the more affecting in context. If the lilting gait of the closing Allegro moderato augers a sense of release, then this proves to be more of an escape than transcendence in music whose subdued demeanour remains essentially unaltered: not least by a coda whose reluctant finality was tangibly realised here.

This was absorbing and impressive music-making, and the Cuarteto Casals ended each programme with encores – respectively a transcription of the ‘Miller’s Dance’ from Falla’s ballet The Three-Cornered Hat, and the ninth of Dvořák’s Cypresses – which proved (surprisingly?) apposite in context. The final recital in this series, on April 17, can only be keenly awaited.