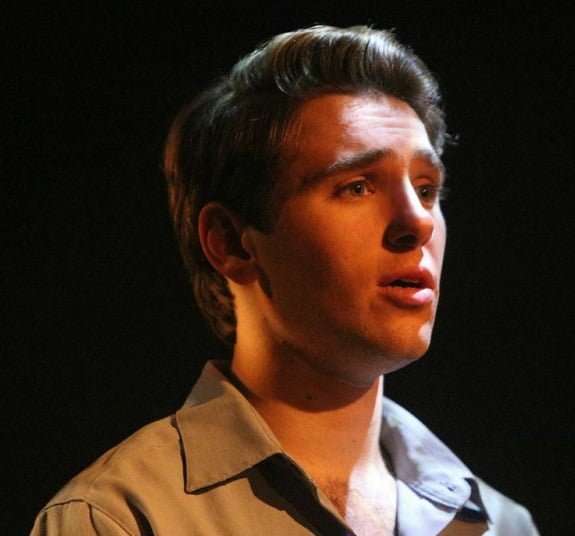 With the recent revival at Chichester of The Pajama Game and its subsequent transfer to the West End, and this current production of Damn Yankees, London has seen in just a few months the complete musical-theatre output of the Richard Adler-Jerry Ross partnership. They had both written songs before they met in 1950 as protégés of the great Frank Loesser, creator of Guys and Dolls and many more enduring shows. However, after their success with The Pajama Game in 1954 and Damn Yankees the following year, Jerry Ross died from a lung condition, age 29. Who knows what the pair might have achieved. Adler lived to be 90, but never repeated the success he had with Ross. He died in 2012.

The pair had the ability to write hit numbers for their musicals which then had a life outside of them. From The Pajama Game came ‘Steam heat’, ‘Hernando’s Hideaway’, ‘Hey there’ and ‘Once a year day’. In Damn Yankees the big numbers are ‘Heart’ and ‘Whatever Lola Wants’. Just as The Pajama Game was filmed with the original cast, except for the replacement of Janis Paige by Doris Day, so was Damn Yankees (Gwen Verdon, Ray Walston) apart from Tab Hunter who replaced Stephen Douglass as Joe Hardy. In the UK the film version was known for some unthinkable reason as What Lola Wants.

You couldn’t get a more American show if you tried, for Damn Yankees is a modern version of the Faust legend transferred to the baseball field. Avid fan Joe Boyd wishes the Washington Senators, his failing team, would win the annual pennant just once. What they need is a long-ball hitter and he declares he would sell his soul for just such a player. Enter Mr Applegate who, fresh up from Hell, is the Devil disguised as a salesman who offers Joe the chance to be that hitter. He agrees, albeit with a last-minute get-out clause, and becomes Joe Hardy, but he needs to leave his wife Meg until the baseball season is over. 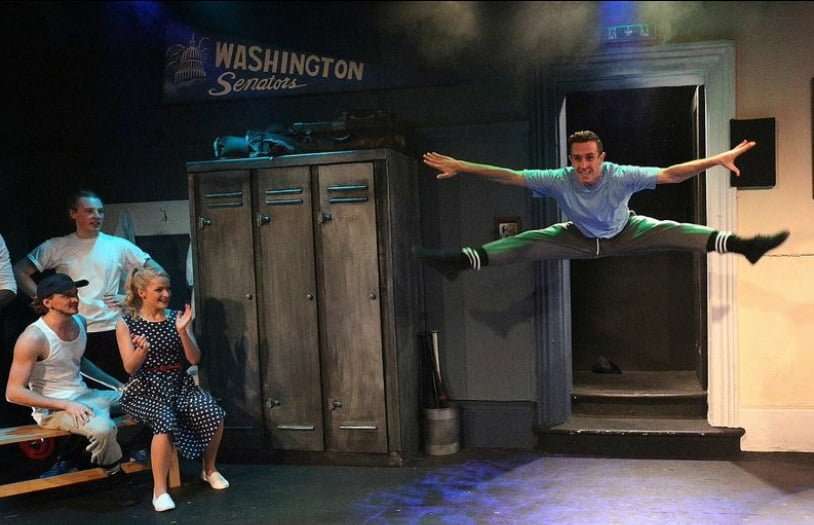 Joe begins to miss his wife. So, unbeknownst to Meg, as Hardy he becomes a boarder in his own home and they become close. In an effort to split them up, Applegate introduces Joe to his female cohort Lola who tries to seduce Joe away from Meg, but she fails even after singing “Whatever Lola wants, Lola gets / And, little man, little Lola wants you.” Even though Joe misses the agreed deadline, he still manages to save the day and the Senators win the pennant from those damn New York Yankees. Meanwhile, Applegate and Lola are sent back to Hell.

There’s much to enjoy in Robert McWhir’s revival. The relatively small but wide stage manages to accommodate a cast of twenty, half of whom are hunky guys well chosen for their prowess. I don’t think the Landor has ever had such a testosterone-laden cast of crumpet before. Together they comprise a brilliant chorus and are outstanding when singing that great paean to positivity ‘(You gotta have) Heart’ and ‘The game’ in which the baseball boys have to find ways of not thinking about girls. As butch as they are, some of them are not averse to camping it up.

And talking of camp brings us to Applegate who, as played by Jonathan D. Ellis, is an outright scream, the Devil incarnate with his evil, scheming ways, but then he is also hilariously funny, particularly in his 11 o’clock number ‘Those were the good old days’, in which he reminisces with relish about the great disasters in history. His sidekick, the libidinous Lola, is given a definitive performance by Poppy Tierney, seductive in the extreme and with a wicked turn of phrase.

The score is packed with great songs, which all fit the book perfectly in mood and nuance. Michael Webborn’s three-piece band of keyboards, drums and bass (the latter two musicians not named) play like a dream, and the show has been cast to strength with excellent performances by Gary Bland as the older Joe, Tony Stansfield as the Senators’ manager Benny Van Buren, Elizabeth Futter as Gloria, an investigative reporter, and with Leah Pinney and Sophie May Whitfield as two housewifely friends of long-suffering baseball-widow Meg, played with sympathy by Nova Skipp. As Hardy, Alex Lodge could be a little more assertive as the gentle giant of baseball but, like the rest of the team, he can shake a good leg in Robbie O’Reilly’s superbly energetic award-nominated choreography for which the cast demonstrates great hoofing. This is a show not to miss.