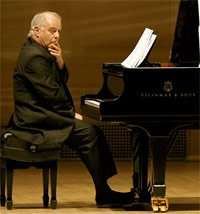 A principal appeal of Daniel Barenboim’s Beethoven Piano Sonata cycle has been the self-contained nature of each recital, making one-off visits suitable in its general application of ‘early-middle-late’ while preserving the overall whole for those attending all eight concerts. Given the overwhelmingly positive reactions so far, and the sheer quality of the performances, it is a great shame that BBC Radio 3 has not recorded the series.

In a recorded message Sir Ian McKellen, no less, now asks us politely not to cough and to switch off phones and the like; can this be embellished to include the unwrapping of sweets and noise in general – although the plea went unheeded as the ‘Pastoral’ Sonata took shape. Barenboim probing the calm aspects of the first movement at a spacious tempo, creating a gentle meditation not without appealing touches of soft humour.

As with his previous performances Barenboim’s attention to detail was meticulous, whether in his careful use of the sustaining pedal or in terms of clarity that brought out Bach-like counterpoint. The varied dynamic range was especially evident in the scherzo, while the preceding straight-laced march of the Andante gave way to a lightly playful central section, the pianist once again securing a beautiful tone.

So, too, in the E major sonata, which closed the concert, the first of Beethoven’s exalted final trio of works in the medium. In his carefully sculpted interpretation Barenboim was even more concentrated, and while the first two movements seemed to pass in the blink of an eye, the sarabande-like Theme and its ensuing Variations of the finale found that peculiarly intense stillness only ‘late’ Beethoven brings. Gradually the tension built, through a second Variation that seemed here like a Bach Invention under Barenboim’s fingers, the music growing ever sterner as it gathered momentum. Barenboim compelled from within the arrival of the sixth Variation and returned full-circle to the sarabande with extraordinary power and intensity and with textures made luminous.

Earlier, the third of Beethoven’s youthful Opus 2 grouping was a more overtly virtuosic, a chance for the pianist to show off and also to indulge his sense of humour. Barenboim did both in modest fashion; the first movement was truly ‘con brio’ if with a few over-generous swings to the tempo. Barenboim successfully brought through this sonata’s anticipations of the ‘Waldstein’, notably at the start of the slow movement, though this was soon subsumed by heavier, more turbulent music. Where occasionally a wrong note was heard this was more than compensated for in the way Barenboim played off moments of open-air bluster and inner calm in the finale.

Beethoven’s only instrumental work to be written in F sharp major sat as a tonal opposite the other side of the interval, the principles of Barenboim’s approach to Beethoven again in evidence in an unhurried approach that secured warm lyricism and a scintillating close.