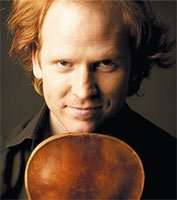 Alfred Schnittke’s First Violin Sonata is a comparatively early work, written when the composer was in his late-twenties. It shows a willingness to adapt to a form of serial technique, just before Shostakovich tried a similar tactic in his own Violin Sonata and Thirteenth String Quartet. Both composers take care to retain a tonal centre in their writing, however – in the case of Schnittke, a ‘pure’ C major that brought affecting moments to this dramatic performance from Daniel Hope and Sebastian Knauer.

Even when ‘in C’ Schnittke’s music retains a restless quality, and Hope’s vigorous, devilish dances in the faster music were never completely erased from the memory. Both players responded well to the dynamic extremes demanded by the composer, so that when the passacaglia theme alternated between softness and harsh, and percussive clanging, Knauer in particular did well to adjust between the two. These uncomfortable juxtapositions of aggression and serenity could be found elsewhere, the faster movements darkly playful with their syncopated jazz rhythms emphasised.

At the end, after a particularly brutal set of chords, peace beckoned – but was not found as the pair hovered uncomfortably, separated by a tritone that refused to move. 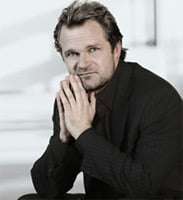 By way of true resolution, to continue this BBC Radio 3 Lunchtime Concert, Hope moved on to perform four arrangements of Mendelssohn Lieder, the violin taking the vocal-line almost note for note. While inevitably losing some expression without the words, Hope’s careful and sometimes feather-light approach brought out a graceful ‘Auf Flügeln des Gesanges’ and a nimble ‘Hexenlied’, where Knauer was particularly quick-fingered in. Hope was conscious of attaining a singing style, and the beautiful higher register of ‘Schiedend’ achieved just that.

Another less settled work followed, with Brahms’s Third Violin Sonata never really finding a convincing resolution right up until the end – and even then not the peace that might have been expected.

Hope and Knauer were light of touch in both the first movement and the scherzo, almost furtive as the darting motifs crossed paths. They achieved a keen tension come reprises – Knauer in the second theme of the first movement, and Hope’s thick tone to begin the Adagio – and extreme turbulence, such as the finale’s opening bars and a rather deliberate tempo as the scherzo theme reappeared.

Conscious of the impact of the Brahms, Hope and Knauer’s encore offered contrast with the slow movement from Mozart’s C major Sonata, K296.