Skip to content
LnRiLWNvbnRhaW5lcltkYXRhLXRvb2xzZXQtYmxvY2tzLWNvbnRhaW5lcj0iNmIzNDMzNmNmZTc3NWZiNGJlMTVjMmIwMzU3NWM1MjYiXSB7IHBhZGRpbmc6IDI1cHg7Ym94LXNoYWRvdzogNXB4IDVweCAxMHB4IDAgcmdiYSggMCwgMCwgMCwgMC41ICk7Ym9yZGVyOiAycHggZG90dGVkIHJnYmEoIDEwOSwgMTA4LCAxMDgsIDEgKTsgfSAudGItZmllbGRbZGF0YS10b29sc2V0LWJsb2Nrcy1maWVsZD0iODM3Y2ExZjc0MGRjZDdkOTdlMzQzOWMyYjIwMWZmZTMiXSB7IGJhY2tncm91bmQtY29sb3I6IHJnYmEoIDIzOCwgMjM4LCAyMzgsIDEgKTtwYWRkaW5nLXRvcDogMTBweDtwYWRkaW5nLWJvdHRvbTogMTBweDtwYWRkaW5nLWxlZnQ6IDEwcHg7IH0g
LnRiLWNvbnRhaW5lcltkYXRhLXRvb2xzZXQtYmxvY2tzLWNvbnRhaW5lcj0iNmIzNDMzNmNmZTc3NWZiNGJlMTVjMmIwMzU3NWM1MjYiXSB7IHBhZGRpbmc6IDI1cHg7Ym94LXNoYWRvdzogNXB4IDVweCAxMHB4IDAgcmdiYSggMCwgMCwgMCwgMC41ICk7Ym9yZGVyOiAycHggZG90dGVkIHJnYmEoIDEwOSwgMTA4LCAxMDgsIDEgKTsgfSAudGItZmllbGRbZGF0YS10b29sc2V0LWJsb2Nrcy1maWVsZD0iODM3Y2ExZjc0MGRjZDdkOTdlMzQzOWMyYjIwMWZmZTMiXSB7IGJhY2tncm91bmQtY29sb3I6IHJnYmEoIDIzOCwgMjM4LCAyMzgsIDEgKTtwYWRkaW5nLXRvcDogMTBweDtwYWRkaW5nLWJvdHRvbTogMTBweDtwYWRkaW5nLWxlZnQ6IDEwcHg7IH0g
Bach
French Suite in G, BWV816
Schumann
Etudes symphoniques, Op.13 [1834-5 version]
Balakirev
Nocturne No.2 in B minor
Rachmaninov
Etudes-tableaux, Op.39 [selections: No.1 in C minor; No.2 in A minor; No.3 in F-sharp minor]
Prokofiev
Piano Sonata No.7 in B flat, Op.83
LnRiLWNvbnRhaW5lcltkYXRhLXRvb2xzZXQtYmxvY2tzLWNvbnRhaW5lcj0iNmIzNDMzNmNmZTc3NWZiNGJlMTVjMmIwMzU3NWM1MjYiXSB7IHBhZGRpbmc6IDI1cHg7Ym94LXNoYWRvdzogNXB4IDVweCAxMHB4IDAgcmdiYSggMCwgMCwgMCwgMC41ICk7Ym9yZGVyOiAycHggZG90dGVkIHJnYmEoIDEwOSwgMTA4LCAxMDgsIDEgKTsgfSAudGItZmllbGRbZGF0YS10b29sc2V0LWJsb2Nrcy1maWVsZD0iODM3Y2ExZjc0MGRjZDdkOTdlMzQzOWMyYjIwMWZmZTMiXSB7IGJhY2tncm91bmQtY29sb3I6IHJnYmEoIDIzOCwgMjM4LCAyMzgsIDEgKTtwYWRkaW5nLXRvcDogMTBweDtwYWRkaW5nLWJvdHRvbTogMTBweDtwYWRkaW5nLWxlZnQ6IDEwcHg7IH0g 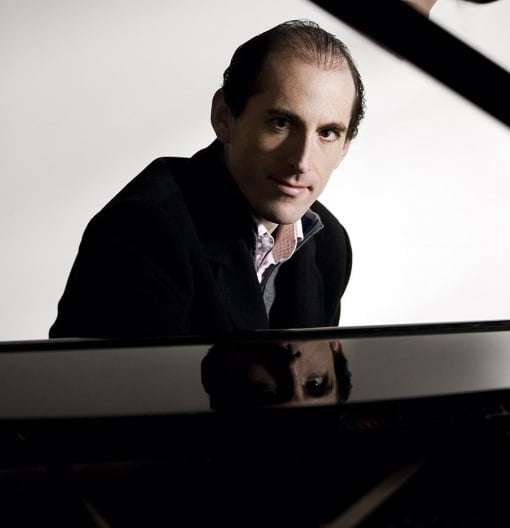 Danny Driver has increasingly become a name to reckon with since the early-2000s, when he was still in his twenties, and he has put much energy into repertoire that fares better in the recording studio – C. P. E. Bach, Erik Chisholm, Benjamin Dale, York Bowen and Balakirev are all enthusiasms that have helped secure his reputation – than it does in the recital hall. Yet apart from his prodigious work ethic, there is in his live performances that instantly hit of engagement, focus and authority that, much in the same way as, say, with Alfred Brendel, reassures and stimulates audiences in equal measure. The rising generation (that is, from the past twenty-five years or so) of young pianists has now risen, and Danny Driver has risen to the top.

Yoga and Alexander devotees might fret over the immobility of his shoulders when the rest of him is in action, but it doesn’t seem to compromise the discipline and fluency of his playing, nor his ability to produce a broad spectrum of colour, weight and tone. Candour and a certain reserve are also attractive elements in his style, both to the fore in his elegant, open account of the G-major French Suite, with a rippling buoyancy rather than overt athleticism defining his approach to the faster movements, and in the slower ‘Sarabande’ and ‘Loure’ his right-hand let slip a poetic flow of decoration unencumbered by over-pedalling.

Schumann’s Etudes symphoniques (in its various forms, here the original 1834-5 version) has been in Driver’s repertoire for some time, and while he has sounded looser and grander previously, this revisiting of a work that presents a baffling mixture of fantasy, variation and technical challenge proved to be the mainstay of this recital. For a start his playing was, for the most part, very clean, and as with the Bach, scrupulously pedalled, so that its formidable virtuosity was there only to express the music’s extraordinary range of style and character. It’s a work that can pulverise the listener in its progress to the Finale, but Driver’s steering of the music’s multi-faceted personality came on the back of a sharp intelligence and profound good taste, so that the end joined up all the dots between vision, summation and closure with satisfying assurance.

In his Russian second half, Driver brought out the painterly qualities of Balakirev’s Nocturne with his exquisite control of tone. But it was in Rachmaninov’s Etudes-tableaux that Driver’s poetic sensibilities were most deeply expressed as he lingered over the shreds of the ‘Dies irae’ motif that works through one of the pieces like a virus and elevating it, for now, to the status of saddest-music-ever-written. That could also have applied to the slow movement of Prokofiev’s Sonata 7, the best-known of his ‘War’ Sonatas, in which he carefully peeled back the caressing opening to reveal wartime horrors. Surprisingly, given Driver’s staggering accomplishment in the Schumann, there was an element of caution to the ferocious outer movements, which blurred the contrast between visceral bite and distracted emptiness.

His encore was the ‘Allemande’ from Bach’s C-minor French Suite (BWV813), poised, limpid and confirming Danny Driver as a seriously interesting and fine musician.