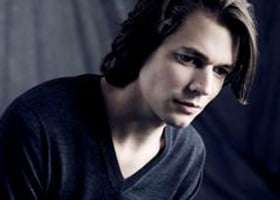 David Fray has previously shown himself to be a sympathetic interpreter of Bach, but here in this BBC Lunchtime Concert he exhibited qualities that show he has a keen understanding of Schubert’s piano music. Fray is concerned only with the music – sitting in an oddly relaxed pose on a ‘normal’ chair, he sometimes played with head and arms stock still, which was particularly striking when he began the third of Schubert’s Impromptus, while now and then he lent forward towards the keyboard as if carefully studying a book.

The title Moments Musicaux is deceptive, since the six movements last just shy of half-an-hour, Schubert’s ironic description a passport for him to try new forms and ideas. Fray gave each of the Moments plenty of room to breathe, and what was particularly striking was his use of quiet dynamics, showing a rare ability to quieten a potentially restless audience.

Each was given a concentrated, personal account. Despite its airy C major appeal, the first was pensive, a little distracted even, while the second, though marked Andantino, was in fact closer to Adagio – and beautifully played. In the faster music Fray was also very persuasive, with the charming waltz of the third given a touch of tasteful rubato, while the fifth, often taken as something of a whirligig, was pointed and well-defined.

For the Impromptus Fray again showed his willingness to vary the tempo but always did so tastefully. The curious structure of the C minor first piece, with its many and varied takes on the same theme, was clearly voiced, while in the second there was a dazzling virtuosity, the right-hand sparkling in its perpetual motion. That said the pianist was keen to present the ending in its darkest possible form, thrown away in a gruff lower register.

The restless compositional spirit behind these four pieces could be frequently glimpsed, with Schubert’s sleights of hand and occasionally abrupt changes of character all magnified by these searching interpretations. With such impressive attention to detail it was touching also to note Fray’s modesty when accepting applause.