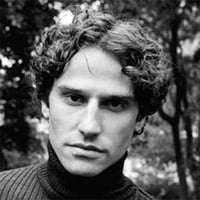 This was 30-year-old David Greilsammer’s London debut. He wore a knee-length coat of black leather. Trained in Israel and the USA, Greilsammer has made a name for himself by devising programmes that juxtapose works unexpectedly but intelligently. The Wigmore Hall theme was Schumann’s vision of himself in three guises – Eusebius, Florestan and Master Raro. Greilsammer wrote the programme notes.

The first half purveyed works that reflected Eusebius (“dreamy, nostalgic and meditative”) by Rameau and Ligeti; a work from Mozart indicating Master Raro (“the reasonable mediator”) and works expressing Florestan [“ecstatic, wild and dramatic”] from Bach and Adams. Subsequently, we met Schumann in every guise, in the 18 dances that comprise the Davidsbundlertänze. (In some, writes Greilsammer, all three appear together.)

This is intelligent programme-making. It takes risks – is searching and exploratory, not to mention astute, in its mingling of composers of various eras and styles.

The Rameau was poised, sprightly and nicely delineated – robust and with character. There was no tinkling baroque here. Particularly distinctive were the ornaments – varied and emphatic. At first, I enjoyed their vigour. Then, I had doubts: the ornaments were too striking. This was turning into a victory of the inconsequential over the essential (Eusebius in the main text; Florestan in the ornaments). I mused over what purpose these majestic ornaments were serving. I concluded that they aimed to display Greilsammer rather than Rameau.

I enjoyed the Ligeti. It was played delicately but briskly – and without swagger. It also sat neatly between the two slices of Rameau, somewhat spiky, but not too much. The Mozart did not make its point. Mozart’s rare moments of raw, tender emotion come through for being treated crisply, not as gooey mouthfuls of marshmallow, however tasteful. The Bach was loud and majestic, imposing and Romantic. Florestan was alive and well. It swallowed up China Gates, rather. Both the Fantasy and the Fugue demonstrated how, in a master composer’s hands, the relatively short makes a gripping impact.

Davidsbundlertänze continued the thesis. The delineation could not have been more clear – an exercise in musical semaphore. At each dance’s start, Greilsammer announced unequivocally which of Schumann’s guises was about to hold sway: the Florestan dances began fff and the Eusebius ppp.

It also served to show Greilsammer’s skill in playing very loudly and clearly, with well-judged pedalling that gave a swell to the sound without occluding it – and in playing very softly indeed, with much refinement and delicacy, gracefully shaped. This was a remarkable exhibition of technical prowess, powered through an acute musical intelligence.

Yet I was uneasy. The overall style was calculated and distant. A paradox confronted me: the concert as a whole (and the playing of Davidsbundlertänze in particular) flamboyantly displayed someone so removed as to be virtually non-present. Schumann’s nuances, his swells of creative flow, his subtlety and, especially, his pain had not entered Greilsammer’s calculations. He was technically and expressively engaged, but emotionally detached.