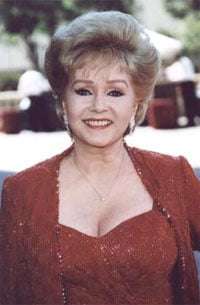 Debbie Reynolds has been a star for most of her working life. Born in Texas in 1932, she won a beauty contest at age sixteen, then began appearing in films at Warner Bros – in “June Bride” with Bette Davis and Robert Montgomery and “The Daughter of Rosie O’Grady”, with June Haver and Gordon MacRae. However, she was soon picked up by Metro-Goldwyn-Mayer and spent most of the 1950s in MGM musicals and romantic comedies, generally playing the young, innocent, girl-next-door type in such titles as “Three Little Words”, “Two Weeks with Love”, “I Love Melvin” and “Give a Girl a Break”. Her best role in the 1950s was as the ingénue Cathy in “Singin’ in the Rain”, with Gene Kelly and Donald O’Connor, arguably MGM’s best musical ever, with a highly amusing screenplay from Betty Comden and Adolph Green which satirises the silent-to-sound era in motion-picture history, coupled with a clutch of classic songs, some brilliant choreography and star singing and dancing performances from the trio of young players. It is probably the film that shows off the talents of all three in the best possible light. It remains as fresh and as charming now as it was then, nearly sixty years ago. Debbie went on to appear in more films, not always comedies, but dramas too including “How the West Was Won”, a Cinerama epic that took months to film. She was nominated for just one part, the title role in “The Unsinkable Molly Brown”, Meredith Willson’s musical about a Titanic survivor which suited her sassy but likable personality to a T. She later appeared on television in her own show and has recently been seen in “Will and Grace”.

Although she had appeared in school plays, Debbie was not that interested in being a movie actress. However, she had a flair for performing and natural talents for singing and dancing and brought a breath of fresh air to any role she played. Apparently she has always mimicked other stars and over the years gathered a cabaret act of songs, stories and humour which she is currently presenting under the title “Debbie Reynolds: Alive and Fabulous”. The lady admits she’s still alive at age 78 (1 April 2010) although she looks about fifty, but leaves it to us to reckon whether or not she is fabulous. Now ‘fabulous’ can take on many meanings. A fabulous beast is one that does not exist because it is based upon a fable. The word can also mean legendary or astounding or unbelievable, or just extremely good. Well, Debbie Reynolds certainly still exists, and could even be called a legend in her own lifetime. Her talents are fairly astounding although not unbelievably so, and for most of the time she has been extremely good. So, yes, it’s true that Debbie Reynolds is pretty fabulous. 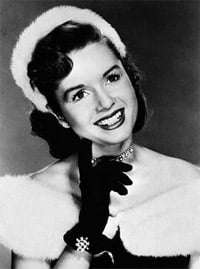 She was born Mary Frances Reynolds but the studio bosses didn’t like her first two names. However, as there happened to be a dog named Debbie in the room at the time, she became known as Debbie Reynolds. The rest is cinema history. Her private life, however, may not have been all that happy. Her marriage to singer Eddie Fisher ended when he left her for Elizabeth Taylor. In her act she recalls working with Frank Sinatra on “The Tender Trap”, revealing that he was a good kisser and that she had obviously married the wrong singer. At her age she reckons many young people in the audience may never have heard of her, so she introduces herself as the mother of Princess Leia (Carrie Fisher) from “Star Wars” which, she says, must make her a Queen!

Her second marriage left her with debts when her shoe-retail businessman husband died. She is, however, quite philosophical about these events and also amusing about most other people, especially those she has worked with. She can turn in spot-on impersonations of the likes of Katharine Hepburn (“Why are the calla lilies in bloom again?”), Mae West (“I used to be snow-white, but I drifted”), Bette Davis and others and she even does Clark Gable and the Irish actor Barry Fitzgerald. Has anybody, man, woman or child, ever impersonated Fitzgerald before? She learnt it off Bette Davis when all three of them were working on “The Catered Affair” (called Wedding Breakfast in the UK). She saves the best for last, though, with an extended routine as Barbra Streisand which is all too cruelly funny, complete with a ‘Schnozzle’ Durante nose job. 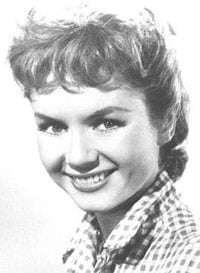 For the most part Debbie’s act takes us briefly through her life and career, illustrated with clips from her films and the numbers she sang in those MGM musicals, such as ‘Aba Daba Honeymoon’ from “Two Weeks With Love”, the title-song from “Singin’ in the Rain” plus the kind of classic songs she has enjoyed all her life, ‘I Want to Be Happy’, ‘From This Moment On’, ‘I Wanna Be Loved By You’, ‘On the Sunny Side of the Street’, ‘Chattanooga Choo-Choo’, ‘Sentimental Journey’, ‘How About You?’ and ‘I Love a Piano’. She pays tribute but does not impersonate her friend and former MGM colleague Judy Garland, singing ‘Get Happy’, ‘For Me and My Gal’, ‘Meet Me in St Louis’, ‘The Boy Next Door’, The Man That Got Away’ and ‘Over the Rainbow’.

With her musical director, pianist Joey Singer, she does a medley of Gershwin songs and he plays a truncated version of Rhapsody in Blue. Debbie opens the show with Sondheim’s ‘I’m Still Here’, from “Follies”, to which she adds her own lyrics, and she closes with her one and only chart hit record, ‘Tammy’ from the film of the same name.

Debbie Reynolds is a natural entertainer (“I do twenty minutes every time the refrigerator door opens and the light comes on”). However, she does her act at the Apollo Theatre as if it were a cabaret in a small venue. This is a pity because she speaks at a rate of knots mostly to the front rows and it’s sometimes possible to miss many of her best punch-lines. The musical accompaniment is over-amplified, often drowning the end of a gag. She needs to slow down and enunciate more clearly, preferably in a laidback, Jack Benny kind of way, because a lot of what she says passes the audience by. Nevertheless, it is a good act in the grand tradition of vaudeville and it’s nice to know that Debbie Reynolds is still alive at 78 and fabulous into the bargain. She claims that when she dies, she’s going to have herself stuffed like Roy Rogers’s horse, Trigger. “They’ll put me in a museum, all stuffed. Just stick a quarter in and I’ll sing ‘Tammy’.” Go for it, girl!