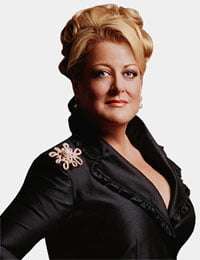 Deborah Voigt has made operatic headlines twice over the last couple of years. First Covent Garden decided that she was carrying too much weight. This decision did rather lead one to wonder as to why the management allowed the corpulent Pavarotti to play Cavaradossi a few seasons ago, or any number of somewhat physically challenged leading men to appear as virile young heroes. Then Voigt shed many pounds, which led to a whole range of explanations being offered up by opera cognoscenti and social commentators.

Given the above, and the fact that this was the singer’s first London appearance since the Covent Garden incident, it was surprising to see that the Barbican was not full. The programme was a typical opera star’s foray into the rather more subtle world of song; there appeared to be no discernible theme, and only Strauss and Bernstein could be considered great songwriters.The Mozart is little more than note-spinning. Voigt appeared to be simply going through the motions, and at the word “dass” the note was marginally taken from below – a fault that would recur throughout the evening. In Verdi she displayed a pleasing legato line, but true Italianate attack and passion was needed. A lot of swaying around went with “Brindisi”, but the vocal line did not suggest drunkenness and throughout this group the dynamic range was severely limited. At no point did Brian Zeger really make his mark; he was far too reserved and deferential, and the rum-ti-tum of the final Verdi song came perilously close to sounding like an English pub ‘Joanna’, which was not, one suspects, the composer’s intention. 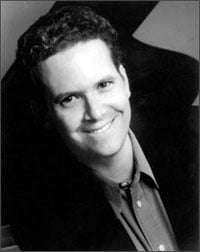 Things improved in the Strauss group. There was more ‘face’ and the second song was truly heartfelt. But the tone could be squally, hard and dynamically limited. These limitations would persist throughout the recital. The intimacy of expression which great Lieder singers command was absent. This was not surprising; Voigt’s natural territory is the opera house where broad brush-strokes are the norm in the dramatic/spinto soprano realm. Irritatingly, after somebody screamed “bravo” at the end of the second song every item was applauded.

After the interval there was a marked improvement. In the Respighi, there was greater richness and focus and Voigt conveyed much of the songs’ heartfelt simplicity. Amy Beach’s output remains shamefully unknown – the chamber music is magnificent – and the singer seemed particularly at ease in the folksy second song. Like many contemporary performers, Voigt does crossover numbers and yet she never really seemed to be able to command the conversational style or rhythmic subtlety required to bring these great Bernstein songs to life. The first one was chiefly notable for the ravishing ppp on the last word, the first time in the evening that the singer had produced such a sound. ‘Somewhere’ – a song that has become an anthem for oppressed and excluded individuals and groups – really needs to be given full grand hymn-like treatment, but Voigt completely failed to convey its aspirational prayer-like longing and did not rise to a heartfelt crescendo before the beautiful ending. The accompanist, remaining discretely respectful and failing to inflect the jazz and cabaret rhythms with any conviction or spontaneity, certainly did not help her.

There were three encores, the second of which, Irving Berlin’s “I Love a Piano”, brought the house down, Voigt joining Zeger for a four-hand version of the final part of the song. In many ways this was the highlight of an otherwise ordinary evening in which yet another distinguished opera singer showed little understanding of the world of song.