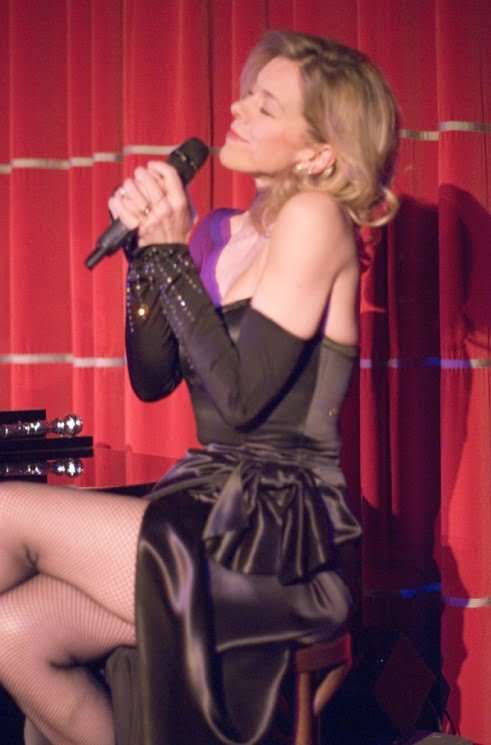 Janie Dee is an incredibly versatile performer, the recipient of countless awards for her work in plays by writers as diverse as Shakespeare, Ayckbourn, Pinter, Coward and O’Neill, and musicals ranging from Cabaret to Hello, Dolly! Recently completing a tour of Asia and Russia in A Midsummer Night’s Dream, she also starred with Angela Lansbury in Blithe Spirit, headed a recent concert performance of A Little Night Music, starred in a revival of 84 Charing Cross Road, and will appear this summer in a new musical, Mrs Henderson Presents.

Dee is also one of the most respected and liked members of her profession, and for the opening of her current season at The Crazy Coqs (recently voted the best cabaret venue in London) she drew a packed audience peppered with luminaries including Greta Scacchi, Wayne Sleep, Alexander Hanson and Don Black. Dee gives her act the flavour of a party (she even sends a bottle of champagne around the room for everyone to have a sip), and every night she will be joined by a selection of performer friends. For her opening she introduced us to Damien Hubley, who appeared with her in the Sondheim revue Putting it Together. Hubley’s powerful and passionate rendition of ‘Marry me a little’, a Sondheim song cut from Company, ignited the audience.

Dee herself has a many-coloured vocal range, particularly apparent in such comedy numbers as Tom Lehrer’s deliciously malicious ‘Poisoning pigeons in the park’, for which she displays several accents, and Alan Ayckbourn’s hilarious portrait of a recalcitrant typewriter and its determined user, ‘Copy type’, to music by Paul Todd. A soaring opener, Burton Lane & Alan Jay Lerner’s ‘On a clear day you can see forever’, proves a total contrast to a beautifully understated rendition of Kander & Ebb’s ‘There goes the ballgame’.

Between numbers, she treats us to some pithy show-business observations and stories. She adored working with Lansbury, and was delighted to discover that Coward’s ‘Where are the songs we sung’ was a childhood favourite of the actress. Sleep assisted her on relating how thrilled they were, when performing Cabaret (in Berlin in 1989), to be present at the tearing down of the Berlin Wall.

Hubley’s show-stopping number was the cue for three further Sondheim songs from Dee – the tongue-twisting ‘Getting married today’ (Company), and two of his finest ballads, ‘Like it was’ from the exquisite Merrily We Roll Along and the title number from Anyone Can Whistle. Alex Parker is Dee’s splendid pianist, and they are joined by guitarist David Shaw, who solos on a version of the music from Cinema Paradiso, described by Dee as “not only my favourite Italian film but my favourite film.”

Dee provides some amusing sound-effect accompaniment on ‘This girl’s in love with you’, reproducing the trumpet style of Herb Alpert, who had a major hit with the Burt Bacharach-Hal David number. She then has us joining in with the infectious rhythms of ‘La bamba’ and for an encore provides a lilting rendition of ‘Mister Snow’ from Carousel, a part she played in the acclaimed National Theatre production.