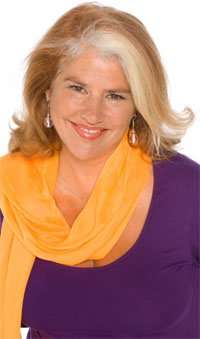 Actress-singer Denise Black has long been involved in music, working with bands between theatre and such television engagements as “Coronation Street”, playing hairdresser Denise Osbourne, and in “Queer as Folk” as terrible mother Hazel, which gave her the chance to buy her first house with husband, musician Paul Sand. (See interview, link below.) Her debut at Pizza on the Park finds her performing many of Paul’s compositions such as ‘Forever Bound’, ‘I Fall in Love Ev’ry Day’, ‘With You’, and ‘Song for Jerry’ which Paul wrote with Graeme Taylor, guitarist and singer in Loose Screw and producer of “First Fourteen”, Denise’s CD recorded for her Pizza on the Park engagement.

She tends to favour contemplative songs in a mixture of folk and funk and what the singer describes as “love rock”. There’s nothing too heavy as it’s an acoustic set with guitar, bass and drums with experienced players. Away from the CD, Denise is a totally different animal in person: vibrant, kooky, funny and self-deprecating. Apart from original songs, Denise peppers her set with standards, including an engaging version of ‘Tell Him’, a hit for The Exciters in 1962 by Bert Berns who also wrote ‘Twist and Shout’, ‘Cry Baby’ and ‘Hang on Sloopy’. Joanna Carlin’s ‘Anyway My Guru Says No!’ is a droll litany of what a woman should not be doing to her body and Denise punches it home to brilliant comic effect.

Other goodies include Randy Newman’s ‘Feels Like Home’, Rufus Wainwright’s ‘Dinner at Eight’ and Cook and Roland’s ‘Are You Tired of Me My Darling?’, a good old folk-tune that dates from 1877 but in Denise’s hands sounds as fresh as new paint. The main discovery, however, are the songs of the late John B. Spencer (1944-2002; the B stands for Barry, although Spencer himself reckoned it should be Bastard). Spencer, like Graeme Taylor, was for a while part of the Home Service folk band. He began his career in publishing and started the Young Artists illustrators’ agency before heading for music with Fairport Convention, and ultimately becoming a songwriter and author of several novels based down the mean streets of west London. His ‘Cry Baby Cry’ shows how good a songwriter he was and Denise does it full justice, while the cha-cha rhythm to ‘Left Hand of Love’ gives the song a really catchy and popular appeal. Another pleasant surprise was a guest appearance by Clare Taylor, daughter of Graeme, who provided spontaneous accompaniment on the violin for her father’s ‘Parting Shot’.

If you know Denise Black only as an actress, it is worth investigating her as a singer. It’s a pity she so rarely combines the two to perform in musical theatre. With her sense of fun and infectious sense of good humour, if anybody is thinking about a revival of Jule Styne and Stephen Sondheim’s “Gypsy”, in Denise they have the perfect Madam Rose.