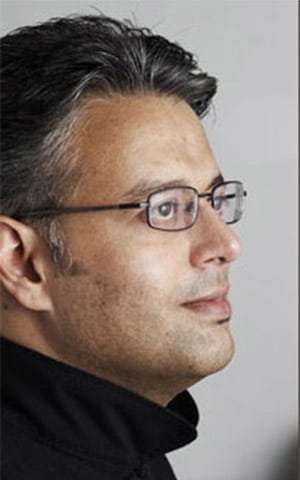 In a recent assessment by the people who do such things, Denmark was discovered to be the Happiest Country in the World. Waiting to hear a selection of work by young Danish composers, I couldn’t decide what effect this might have on the creation of music there. Would it shine with elements of fun and humour? Or would the constant delight of life leave a composer craving some misery in his creative world? Would a young Danish artist want to welcome us to their Scandinavian oasis of joy, writing accessible and easily comprehensible music, or strive to keep party-poopers out, depressed by our creative ignorance?

As in all good arts-degree questions, it turns out the answer is all of the above. Except, in fact, for the easily accessible bit!

Framing and pervading the first half of the concert was Simon Steen-Andersen’s Run Time Error at Queen Elizabeth Hall. Like much of his work, this needs a little explanation. Prior to the concert, he had littered the building with objects found in the venue. Arming himself with a stick in one hand and a microphone in the other, he emerges from behind a white panel, then makes his way through the building, banging anything he encounters, until he returns, spent, behind the panel. His journey is filmed, and the recording he has made is matched to the images. 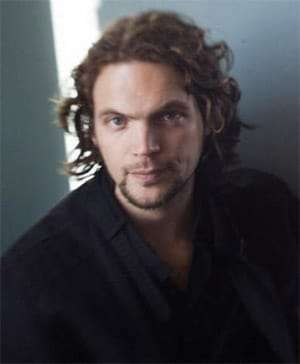 It is this composite recording that is his instrument. Using two joysticks to control speed and direction of play, the video and audio is played, twice, simultaneously. In one instance one film is reversed. In another, two phasing and spatially panned electronic bleeps are manipulated with the film. It is the interplay between the two recording instances that provides the possibility of sonic interest. In most cases, though, the effect produced feels more like sound-art. In the final section, however, more interesting musical elements emerge, with looped and manipulated percussive sounds combining to create almost fugal if minimalist passages.

In the midst of the Steen-Andersen, Christensen Winther Christensen ‘s Trio and Sextet assumed an almost conventional feeling. Almost! In Trio, using material drawn from Beethoven’s ‘Choral’ Symphony, strident sections contrasted strikingly with immensely quiet passages, as to be silent, or at least lost by the third row of the audience. Sextet, however, exhibited a rousing dance-like quality, using surprisingly effective effects, such as playing a clarinet without its mouthpiece. The choreographic quality of these works was particularly noticeable, sometimes seeming to assume more importance than the production of sound. During the latter stages of Sextet, the pianist seemed to busy himself with polishing the inside of the piano, appearing blissfully unaware of the music around him.

Kuro ton’neru translates as “dark tunnel”, and the cinematic quality of the music is very evident. Accompanied by a film of the windscreen view whilst driving through a tunnel, the musical elements resonated with the seductively transitory nature of the images. Nicolai Worsaae describes the work as reflecting the repetitive rhythms of the car’s journey, although not intended as an accurate representation. It is an intriguing idea, and one previously explored by Michael Gondry’s 2002 video for the Chemical Brothers’ Star Guitar. Rivalling the projection for attention, however, was the impressive array of items the percussionist was making use of. These included a Tibetan singing bowl (expertly played), sheets of paper to rub together, a surprisingly large glass bottle to blow across, a squeaky balloon, and, most intriguingly, a blowing pipe disappearing down the player’s trousers.

Rune Glerup’s Quartettsatz intentionally carries no programme note, and perhaps behaves more traditionally than the other items on this programme, with the four players combining to produce some beautifully sustained textures, and elements of poise and elegance permeating the music. 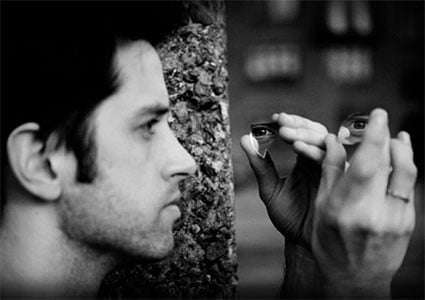 The concert’s highlight turned out to be Steen-Andersen’s Black Box Music. Scored for percussion soloist, amplified box, 15 instruments and video, the work examines the role of conductor as performer through a parody of puppet-theatre aesthetics, which means watching players on each side of the stage and behind the audience, the soloist isolated up-stage, his arms projected in real-time on to the back wall of the stage. These disembodied hands proceed to open and close the stage curtains, operate a selection of lights, and gesticulate in time with the normally staccato musical phrases. So, a ballet for two hands! Driven by the rhythmic music, the hands seemed to gain an omnipotent quality, brilliantly diffused by the strong currents of humour. At certain moments the limbs seemed to diverge from the music, leaving the spectator unsure if this was a delightful comment on the fleeting nature of absolute power, or the soloist making a few mistakes.

And then it gets a little bit silly. After a section involving a selection of tuning forks, Håkon Stene constructed a web of rubber bands inside the box and then introduced an electric motor whirling another rubber band. Inserting objects into the path of the flailing rubber band produced, well, the sound of an object being repeatedly struck by a rubber band, which provided a cadenza of sorts, albeit one which appeared to simulate the sound of someone attempting to drill through your skull using a pepper grinder. Then bundles of shredded paper were heaped in, eventually clogging the apparatus.

There is no denying that the work is witty, the instrumental and percussive elements surprisingly beguiling, and the narrative compelling. There is also no denying that visually it was like watching a blind, lunatic mechanic preparing for an S & M party in a disturbingly small cellar. But, pleasingly, the experience left one with the uncomfortable feeling that someone had been made fun of, and that it might have been you. And that seems to be at the heart of a lot of Steen-Andersen’s creations – the feeling that he is a wry observer of contemporary culture, and chooses to reflect and ruminate on this through his intricate musical constructions. Maybe irony is in the ear of the beholder. As I returned to my seat after the interval, I overheard someone comment: “I mean, obviously you can trick people into liking certain music.” I think they may be right. I’m just unsure who exactly is being tricked by whom.