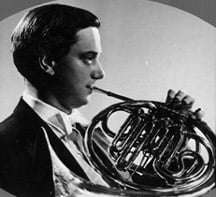 Within the dozen or so years prior to Brain’s untimely death he had established his pre-eminence as a very great artist and in doing so had raised the profile of his chosen instrument, the French horn, to the point where leading composers of the day had been inspired by his virtuosity and musicianship to write music especially for him.

Dennis Brain had been the principal horn of the Philharmonia Orchestra, and to mark the half-century since his death, the Philharmonia mounted the first of two Dennis Brain 50th-Anniversary Concerts (the second is in Bedford Corn Exchange on the 7th), sponsored by the Rev and Mrs John Wates, and conducted by the most famous of Brain’s successors, Barry Tuckwell.

In the nature of things, the programme and indeed the performances amounted to a significant ‘hornfest’, beginning with Richard Strauss’s Don Juan, wherein a symphony orchestra’s horn section has ample opportunity to shine. But the work is not a pushover, especially for the string section, which has to contend with arguably the most difficult of all openings in the standard orchestral repertoire. Barry Tuckwell needs no introduction to horn aficionados and he directed a very fine account of this exceptionally demanding score – in which the current Philharmonia horn section shone.

We had no fewer than six horn soloists in the programme, and first up was Laurence Davies in Mozart’s E flat Concerto K495. This was very well played by all concerned although one felt an element of routine, rather than inspiration, had crept in during the second movement, and perhaps the finale was taken a shade too fast – certainly regarding clear articulation.

This was followed by the world premiere of Timothy Jackson’s Atalanta, for four horn soloists, four orchestral horns, two harps and strings, conducted by the composer. This was effective enough in terms of sound, but as a work of art proved seriously deficient in terms of consistency of style, character and memorability. It was a pity that neither Schumann’s Konzertstück for four horns and orchestra nor Hindemith’s Concerto of 1949, premiered by Dennis Brain, could have been included. As might have been expected, Atalanta is extremely well laid out for the soloists, in this instance Nigel Black, Laurence Davies, James Handy and Cormac Ó hAodáin, who clearly relished the opportunities the composer gave them.

The work attributed to Joseph Haydn (it may be by his brother Michael – in which latter case, if true, he had a rush of inspiration way above his usual achievements), the Concerto for Two Horns and Orchestra, is a very fine composition. This received a superb performance by Nigel Black and Cormac Ó hAodáin – with Tuckwell and the Philharmonia accompanying admirably. This was followed by Richard Strauss’s First Horn Concerto – of which Dennis Brain made two recordings – in which Richard Watkins was the outstanding soloist. One does not wish to decry the excellence of the other players in saying that this was the performance of the evening – but it was.

Finally, Watkins, Black, Thompson and Davies were the soloists in a completion and arrangement by Colin Matthews of a fragment for four horns, string orchestra and bells by Benjamin Britten, In memoriam Dennis Brain, which quotes various bits of material from the composer’s “Serenade”. Britten was quite right not to proceed with it, and it would have been better for all concerned had it remained as he left it.